Bobbi's thread of her PVC target stand made me want something like that for myself too. Except it had to be something I can take apart and carry wherever I need it without much effort or waste of space. After some quick drawing and some pipe cutting, I got a pile o' stuff that looks like this:

After about 20 seconds of assembly, it looks like this:

It's not sturdy enough for any wrapping stuff, but should do just fine for zip ties or spaghetti. Gonna do some rethinking and design a sturdier version. Maybe even use aluminium pipe this time.

If you made something similar in aluminium, to do wraps, it would - I assume - need to be weighted, or perhaps anchored down in some way. Any ideas about how to do that?

PVC is actually really easy to work with. You can cut it with a cheap pipe cutter, and there are all sorts of different connectors with different angles and dimensions available. Lovely stuff really.

The one I'll make for wrapping will be anchored down. I'm thinking just some simple U-shaped pieces of steel that can be pushed into the ground. Weights would probably work better with less hassle, but they would also mess with the whole concept of portability. Not much use making a lightweight stand if you have to carry a set of dumbbells around with it

Take a couple of canvas bags with you and fill it with sand or rocks to weight it down.  I know Finland has rocks everywhere!

You could anchor it down with some tent pegs, or similar spikes that you push into the ground... 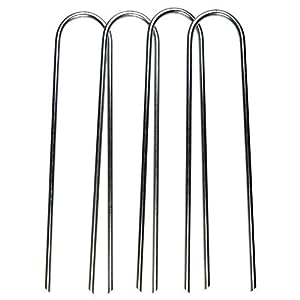 Perfect, they take no space at all and don't weigh much either.

And no drilling holes to put tent stakes through!!
That looks great, well done Pokkis!

Pokkis, you could also fill the bottom base pipes with sand which might make it stable enough  to do wraps. Not being anchored down might help promote the proper results of wrapping and not "striking" the intended
subject.

Wow looking great! I can totally understand the appeal playing around with all the pipes and connectors

I've been playing with the subject in my head but I want it to be totally portable and I think you nailed it with the bendy spikey things! Sand would be good for a permanent stand but in that case I'd probably use something heavier to begin with like wood.

I'd love to try this one out some day!

Pokkis, you could also fill the bottom base pipes with sand which might make it stable enough  to do wraps. Not being anchored down might help promote the proper results of wrapping and not "striking" the intended
subject.

This. I had actually made my best attempt at a pair of tonfa out of PVC, and filled them with steel shot. All it takes is some epoxy on the caps to prevent it getting out. As for the junction points, you can easily make a couple of thin discs to plug the holes on that end of each pipe. Maybe a wood dowel, even. The pipes would still fit into the junction fittings, and nothing would ever be able to spill out.

Using weights would probably give future versions some stability, but in my mind it wouldn't be worth it. Having to carry the weights around would make it less portable, and producing sand is not something you can always do either. Cracking a whip in a park looks crazy enough without me busting out my E-tool and digging a hole

That, and I don't think we're talking about much force even with wraps. It's probably more than enough to anchor the stand so that it won't move sideways, as engineering-wise that's actually a pretty nice structure on its own if you really think about it and draw lines in your mind how energy would transfer from the top to the base. I'll still go with the light weight and the spikes for the base.

But that's all for a more advanced version of the same, made from aluminium. I'll most likely not even anchor this PVC one to the ground as it would serve very little purpose. There's a one metre long piece of 20mm plastic pipe stuck upright in the base after all, and that flexes a whole lot. So anchoring and weights wouldn't make it stable in any case. The more stable one will have to be metal -- or carbon fiber if I'd suddenly start pooping money -- with some triangle structures and other enginerdy stuff. Already got some ideas.

Nice work Pokkis, simple, but effective. For the base you could also do an X if you can find a 5-way Cross which would simplify the parts list further.

Carbon fiber would be awesome, but I'm not sure if it can do done for under $100. Aluminum probably could though, depending on what is used for the arms and body.

Pokkis, if you are going to use aluminum you might use some chain link fence posts.

Oh, Pokkis... I see a huge potential in that! Do more of those stands, try to find a canvas bag which can hold the whole thing and sell it! I'm sure that there are a lot of people who would be happy to buy that! Offer two lines: One made from plastic pipes, one from aluminum. Together with those "ground clamps" it's a perfect thing! Anyone could pack it on the back, take a bike and go somewhere to practice easily. You should definitely do such a thing!

Pokkis, I'm sure Robby's right! Go for it!

You know, it just might be a cool idea to make these for sale. If this basic PVC pipe version works for the purpose, it should be very affordable if I buy enough supplies for making ten or more of those at once.

Even the aluminium version shouldn't get too costly. The pipe I use for whip handles doesn't cost much more per metre than the PVC I used on this project, but of course it would need to be anodized or otherwise treated for durability. No idea how much it would cost then, but it still shouldn't end up overly expensive. We'll see.

Hi Antti "Pokkis" Mäkinen, I have not seen Bobbi's PVC target stand but I am sure it is great. Your target stand is also great. I like it very much and it looks like it is very portable. I have been thinking of getting a target stand and your idea is very good. Thanks for the good post a thanks for sharing your pictures.