Topic: Too much muscle

Just thought this would be an interesting picture to see what happens when you put much to much power into a crack.
In this case, I needed to get my dogs attention, and I needed it RIGHT NOW! to prevent a dog fight with a stranger dog.
It worked, and required only one crack fortunately.

(actually, I tried it and it still cracked ok after the cracker exploded. The fall was frayed enough to act like a cracker.)

Wow, I've never been able get my crackers to explode unless they were entirely worn out, and on a snakewhip?
You sir, seem to break things rather readily, perhaps you should try some dyneema.

Ha! Yes, I do seem to break things lately. Maybe Dyneema would be a good idea.
Actually I have no idea if the cracker itself exploded or not since it disappeared completely, but fall itself definitely did.

Be careful with those super powers of yours!

Wow…
busted fall or not… every time I see that whip i drool.

You and paracord must not be friends

Jonathan, can you show how the cracker was attached to that fall...? When a cracker is really tight on the fall and you crack with enough force, it kinda "cuts' so deep into the fall material that, well...

Thank you Robby, that is good information to have. Of course I cannot post a picture of that precise attachment because it completely gone now, but I'll take a picture of how I usually do it. It's just the standard number 6 knot. That one was on there for a little while so it's quite possible it had gotten very tight with use.

The knots become very tight very soon. But to destroy the fall like that you have to cracky it really hard and/or the nylon of the fall has to be worn out. Please post a picture how the knot looked like. When you have a knot that kinda "bypasses" the energy that doesn't happens too often. But when you have a knot that goes like a ring around the fall it "chokes" the material and cuts into it.

Here is a picture of the cracker I replaced the missing one with. This is how I always tie it on this whip. This one has been on the whip for about a week, I'm not sure how long the missing one was on there. 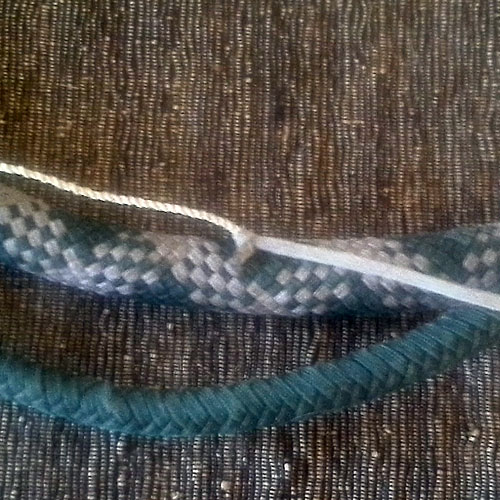 I'm sure you know that knot, but it's pretty cool to avoid too much stress on the fall material

The first one is the one I used, though it may be difficult to see in the photo.
The second one I don't think I have seen before, I'll give that a try.

The first one was ripped off...? Ups. I didn't expect that. Perhaps the other one will do. Anyway - here's one more:

p.s.
Just for the records - I know all these knots, but I didn't take the pics by myself.

Very cool. That's two new knots to me, with a bonus variation for "tuck in".
I like that last one because the end of the fall is pointing in the right direction.

Well for pete sakes, there are more ways yet to tie a cracker...Thanks for #2 Robby, I haven't seen it till now either.

Robby, Thanks for those pictures! I'll be trying out #2 myself!

You're more then welcome. And...there are even more ways to attach a cracker. I knew there must be some benefit, being just a whip teacher and not a braider!

Here are more ways for you

On that "orange knot" - one thing... When you attach it to a leather fall, make sure that there is a little notch the knot can "bite" into. On a nylon fall it would be good to burn the end of the fall and press it onto a hard, flat surface, so that you'll have (attention: that happens when one translates from german directly into english...) kind a mushroom. That'll prevent the knot from slipping. And - believe me - when you don't have that "mushroom" at the end, or a notch, it will slip off.

Wow Robby. I've never even seen most of these knots before. Thanks for the pics.

Traditionally, I've used that little box knot that Robby posted, (the pictures with the leather fall, variations on both the image marked "1" and "2",) but after changing a popper on a whip that I'd loaned out to a student many moons ago, (fall was thick white hide and hadn't been cracked in a while, so while conditioned, the fall was a little stiff.)  I've started using that in-line "tie the knots in the string, not the leather" method you can see in the 3b pic Robby posted.

For the most part, I really like it, and have had VERY good luck keeping my poppers in place.

Cracks seem just a little sharper and crisper with that whip now.  I think the whip is cracking a little more efficiently, as tying a knot in the FALL makes this little ball of concentrated mass at the end of the fall, creating a minor interruption in the taper.  That last knot for the most part just carries out that continuous line and continuous taper to the fluffy end of the popper.

I've since reset a popper on another whip using this method, (reset, not replaced.  The popper came off, and I reattached it differently,) and have noticed a slightly improved volume and ease of cracking there too.

Really though, the differences are minor, but I DO think I'm putting a bit less stress on the leather of my falls by not putting small, tight knots in them that break down the leather over time.

I agree with Dan: it's much better (at least, in my experience) not to tie a knot in the end of a leather fall. There are several ways of attaching the cracker quite securely, and I'm convinced that a knot in the fall does slow things down - as well as wearing out the leather in time.

Thanks for the variety of styles for tying the crackers, everyone. I'm going to try a few of these on my whips and see the results.