Here are my latest whips.

first is an 8-foot, imperial red, nylon bullwhip with a 10 inch Indian Ebony handle. This is whip number 72. It has 3 bellies over a twisted-tapered core, a 20-plait overlay, an English eye fall hitch, a 24-inch double loop, weighted fall, and a 10-inch B55 nylon cracker. The whip is waxed. 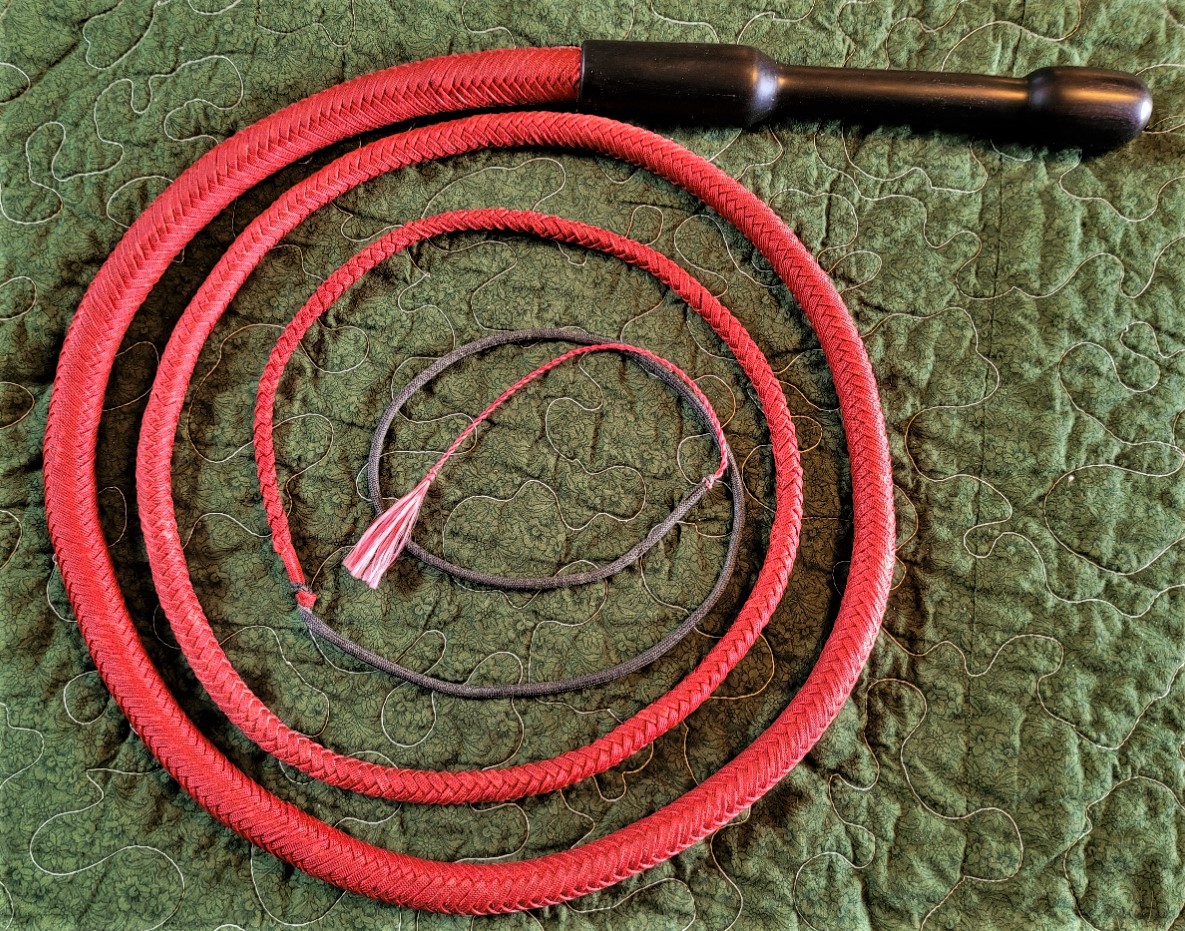 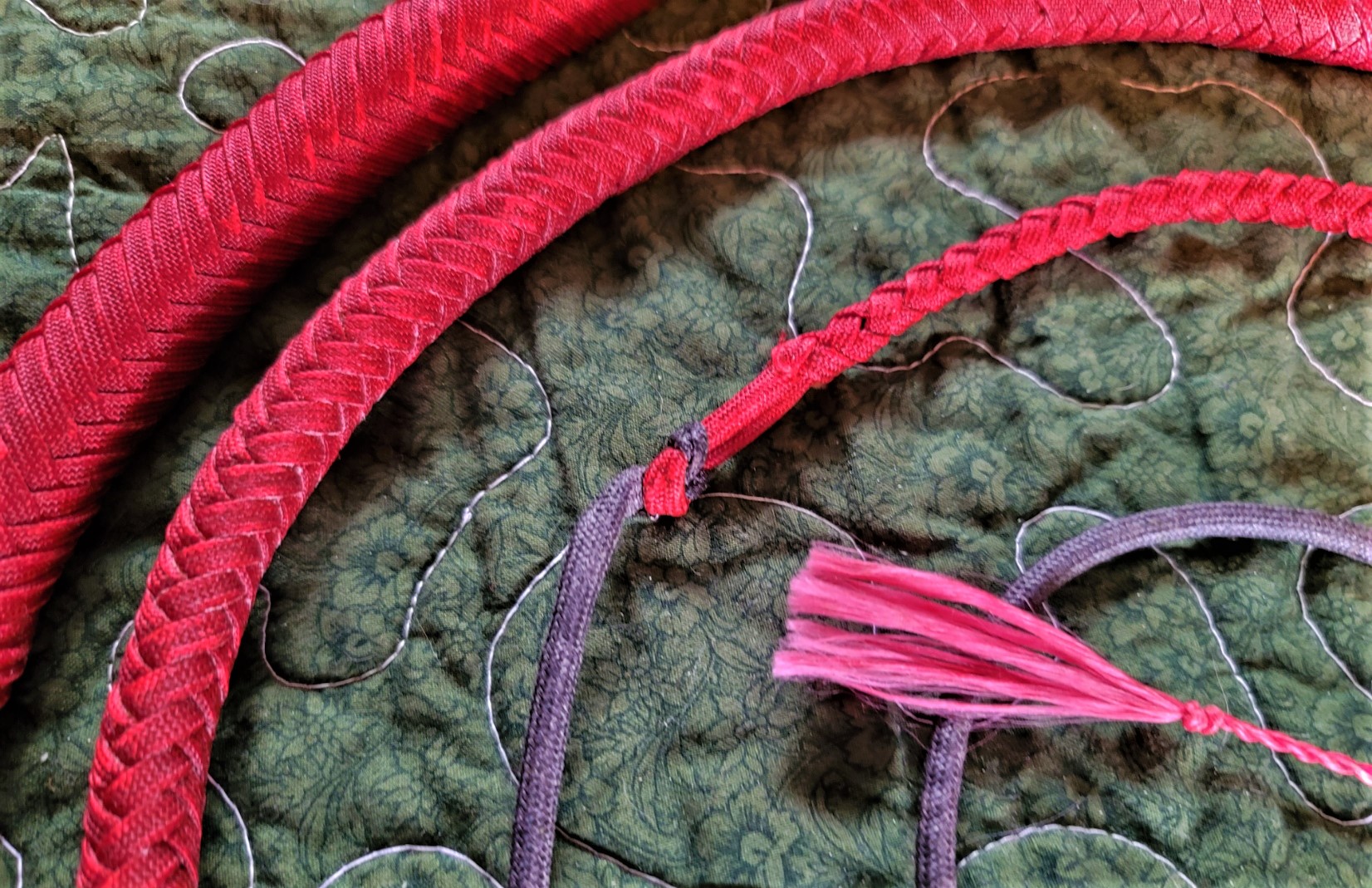 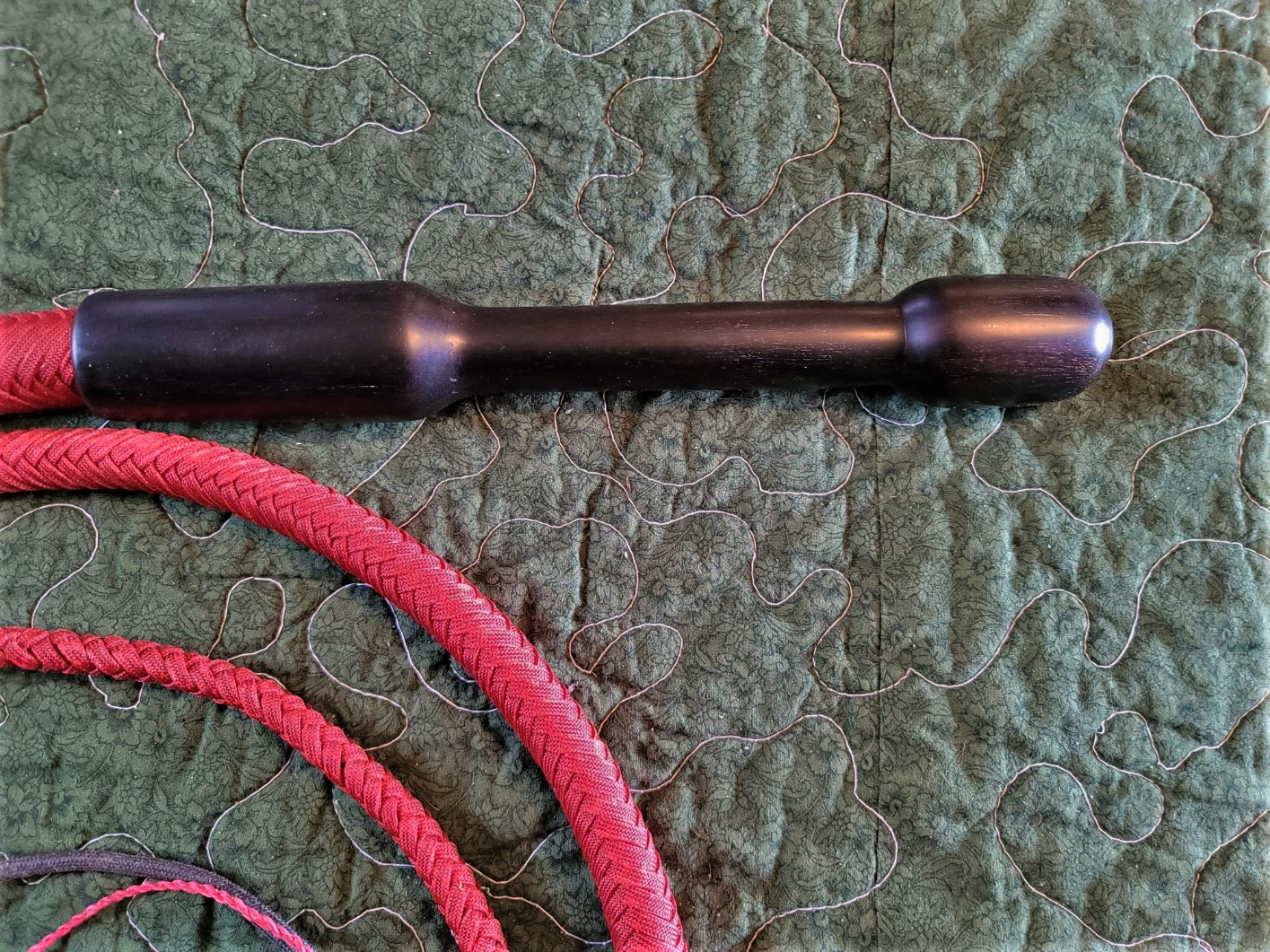 Next is an experiment based on a whip made by the extraordinary whip cracker, Adam Winrich. A few months ago he and Nick Schrader of Nick’s Whip Shop made a video showing how Mr. Winrich made a single belly bull whip from paracord. I wanted to see for myself how it would work out and so I made this whip.

This is whip #73. It is an 8-ft long with a 10-inch steel rod for the handle. The core is made of 8 un-gutted strands of paracord of different lengths bound with artificial sinew to start the taper of the whip. It has a 12 plait belly around this core. The overlay is 16-plait and ends with a twisted taper. it has a 2-foot, weighted fall and a 10-inch B55 nylon cracker. The heel knot is a 7×6 Turk’s head knot over a lead foundation and the transition is a 5×4 THK. The whip is waxed 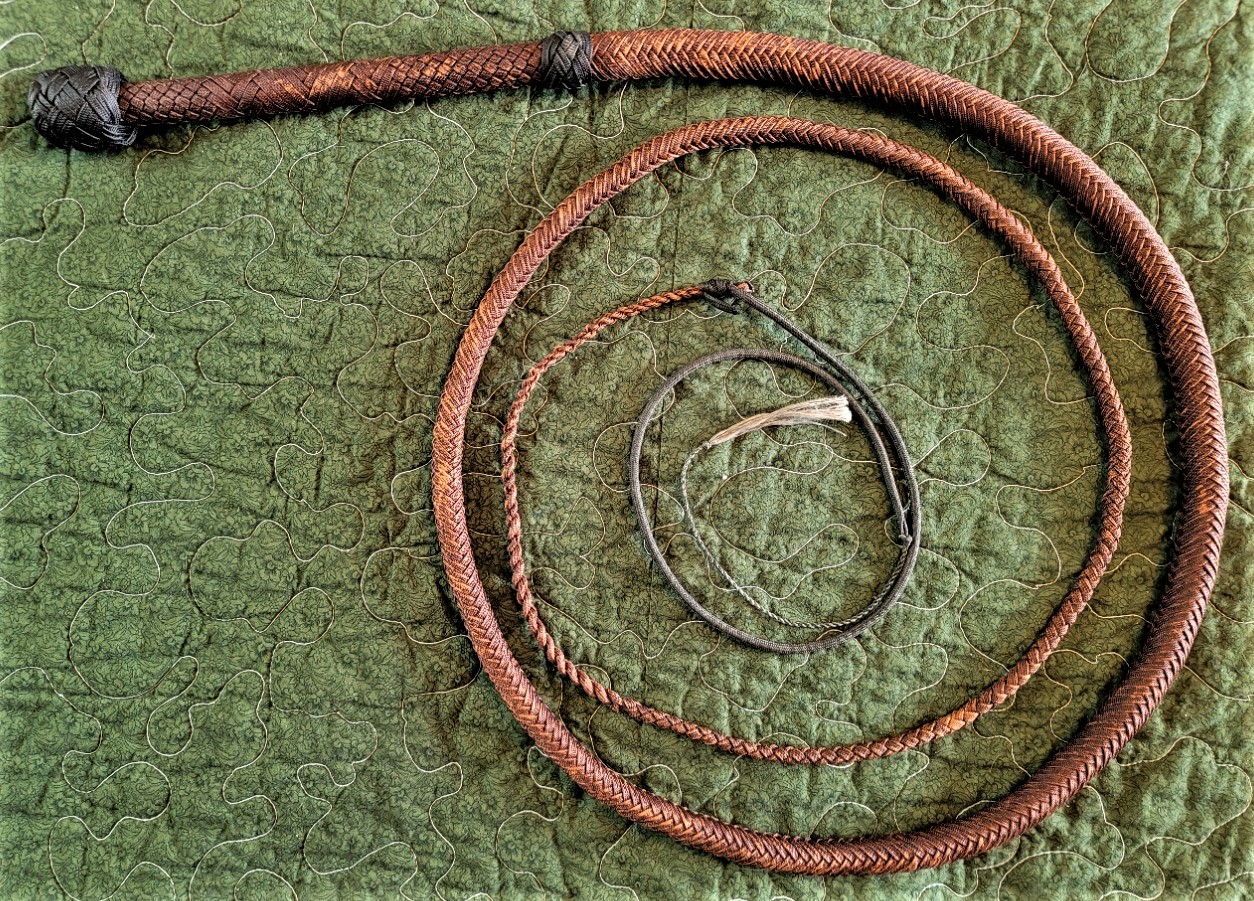 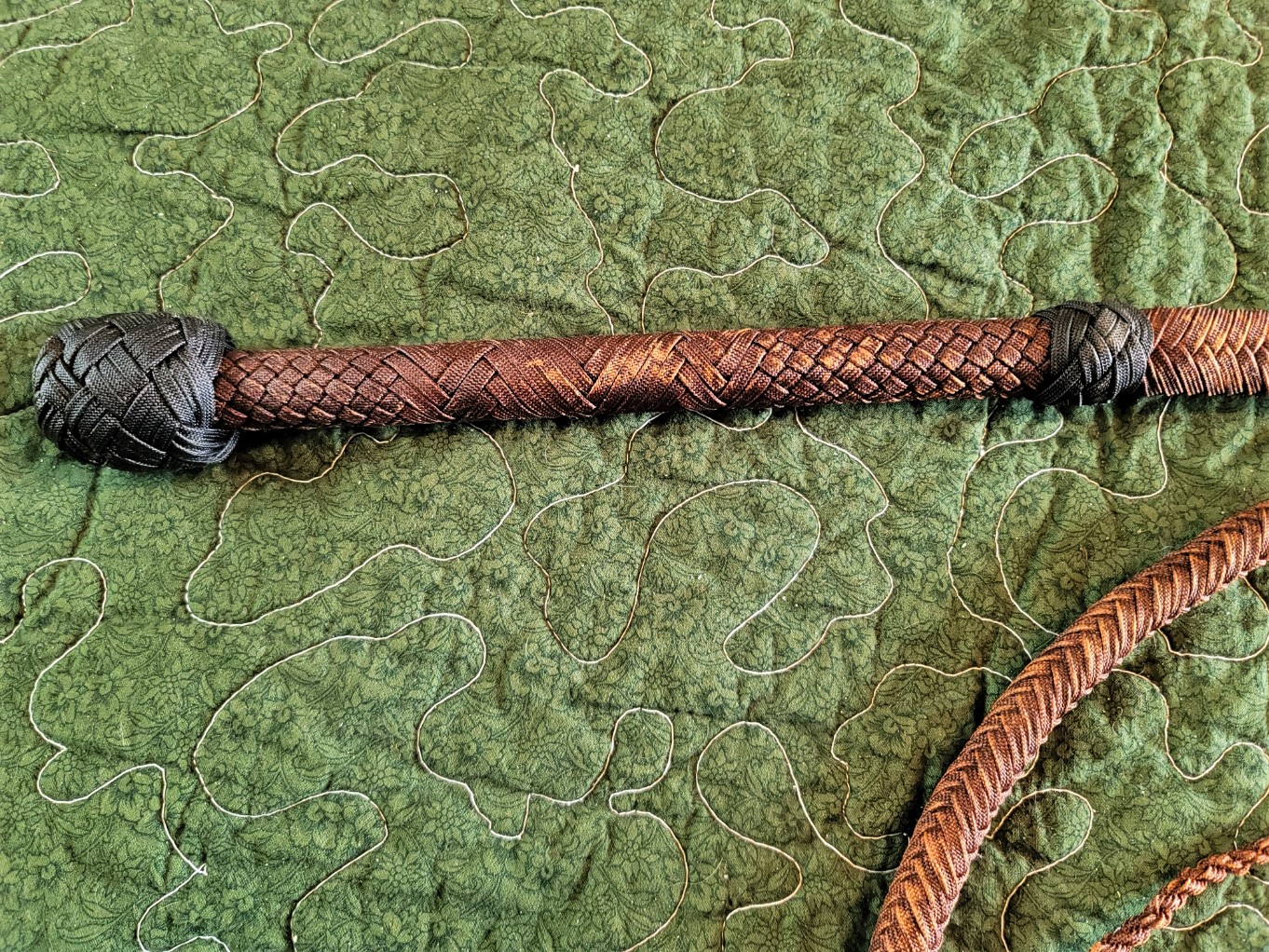 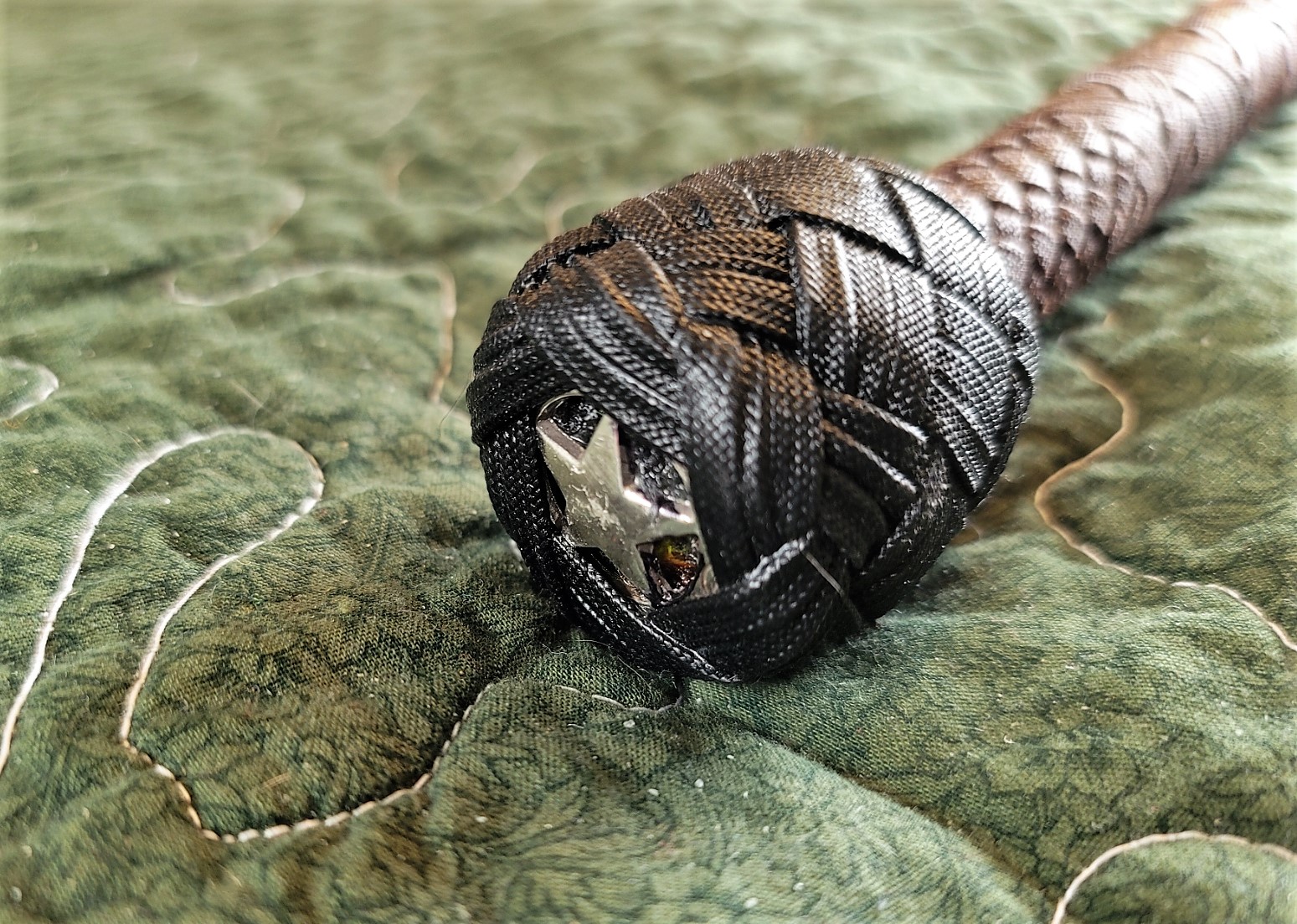 I forgot to say that the red whip is basically a cow whip but the handle is epoxied on instead of tied on with a keeper. This innovation was created by Rachel and I, being basically an uncreative person, have tried to copy it to the best of my ability, poor as it is.

I love color of the brown one. The handle almost looks like plaited wood strands.
It stands to reason that with more support comes more "spring" to help move the energy down the thong with less energy from the thrower.

Both of them are very nicely done.

Mark, these are beauties!  You did a fine job!

Thanks Ron, and Rachel. Ron, that rust cord is just about my favorite color to work with. I buy it and the black in 1000 ft spools

Very fine work, Mark!  I have to say I prefer the red one - though I'm not quite sure why.  It somehow looks more 'business-like' to me - but both look very good.

Mark, those whips look superb and I'm sure that they perfom as good as they look!

Nice!
Brown one has great "patina"

Thanks, guys. Robert, I like the way the red one handles a little better as well.

Mark, I somehow sensed that it would perform better - I don't know how!

Love that red whip, fascinating experiment with #73, thanks for sharing the details!

Mark, I'm late on board here but have enjoyed viewing your whip photos.  My whip #1 was made based on that same  Adam W. video. It took 3 trips to the library to view the video, and while waiting for artificial sinew, e tape was used.  The e tape idea came from  an easy to find on the net "instructables" .  I know better now, but the whip does crack pretty easy and a lot learned .   Just might put an order in for some "rust" paracord