Here is whip number 70. It is the second whip in an experiment to see if I could tell the difference between a shot-loaded core and a twisted-tapered core.

It's a 9-foot, 16-plait, rust-colored paracord whip with a 2-foot long TT core, 2 plaited bellies, a TT tail, a 12-inch Goncalo Alves handle, a 24-inch weighted fall, and a 10-inch, B55 cracker. You can check it against the specs of the other whip in the Blue Norther post.

The blue whip weighs about 6 ounces more than the rusty whip. that's a little more than the weight of a McDonald's quarter-pounder patty, not much really. Part of that difference could be that the handles are not exactly the same but only as close as I could eye-ball it.  The rusty whip is 1/16th of an inch (approx, 1.5 mm) thicker than the blue one and so the handle had to be drilled out to 13/16" instead of 3/4", which could account for some of the weight difference. I also miss measured the heel knob of the handle and the rusty one is about a half-inch longer than the blue one, which should more than offset the different sized holes for the cup. The rusty whip with the TT core has a much better taper.

I really can't tell much difference in the way the whips handle.k The larger heel knob doesn't fit my hand as well as the smaller one, so that bothers me a little, but other than that, they feel about the same and flow about the same. Both are long, heavy, slow whips, and both crack easily and are fun to throw. I've been using the TT core more than the shot-loaded core for some time now and since there doesn't seem to be any noticeable difference and the TT core is much easier to do, I'll probably not bother with them anymore. 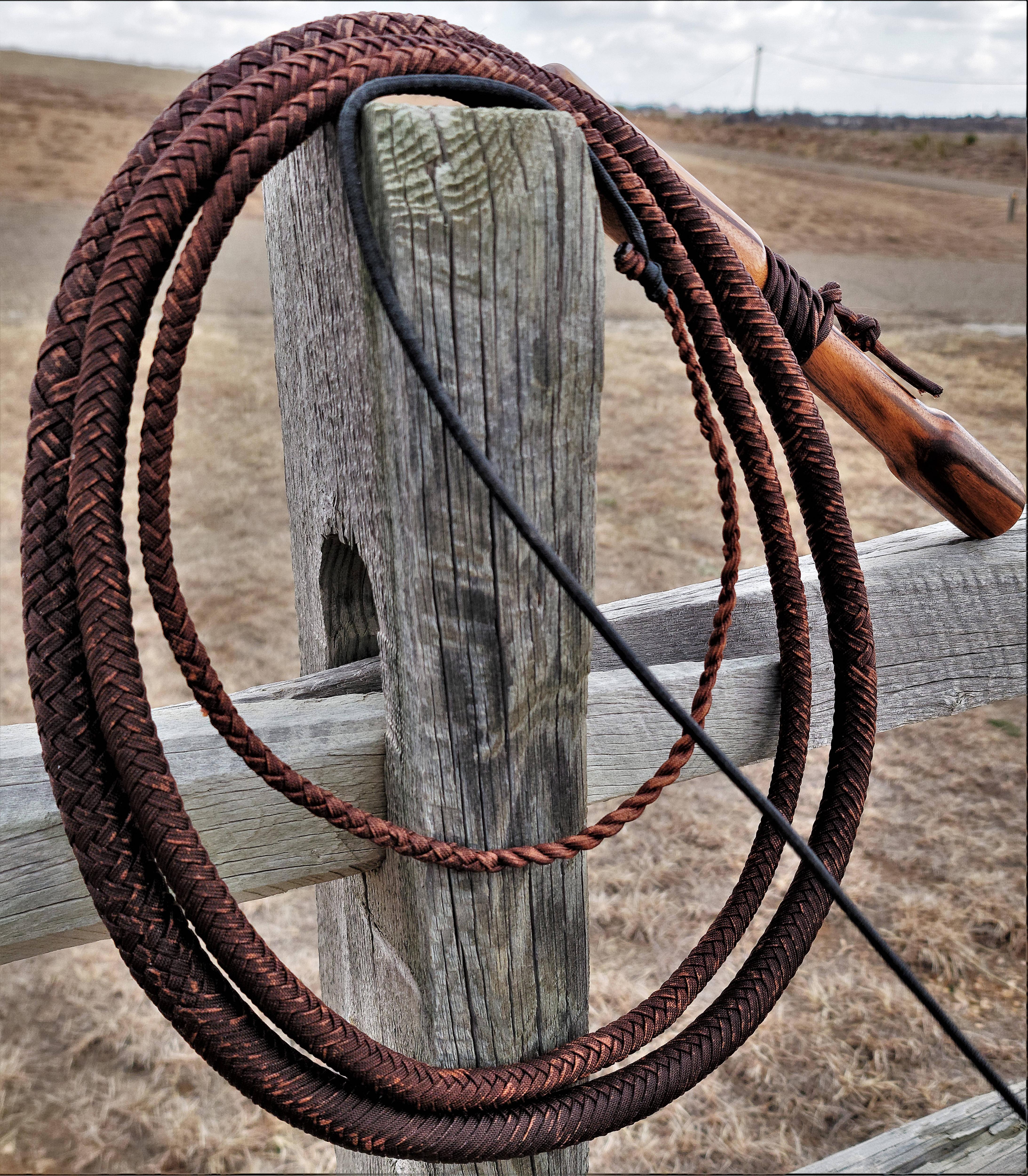 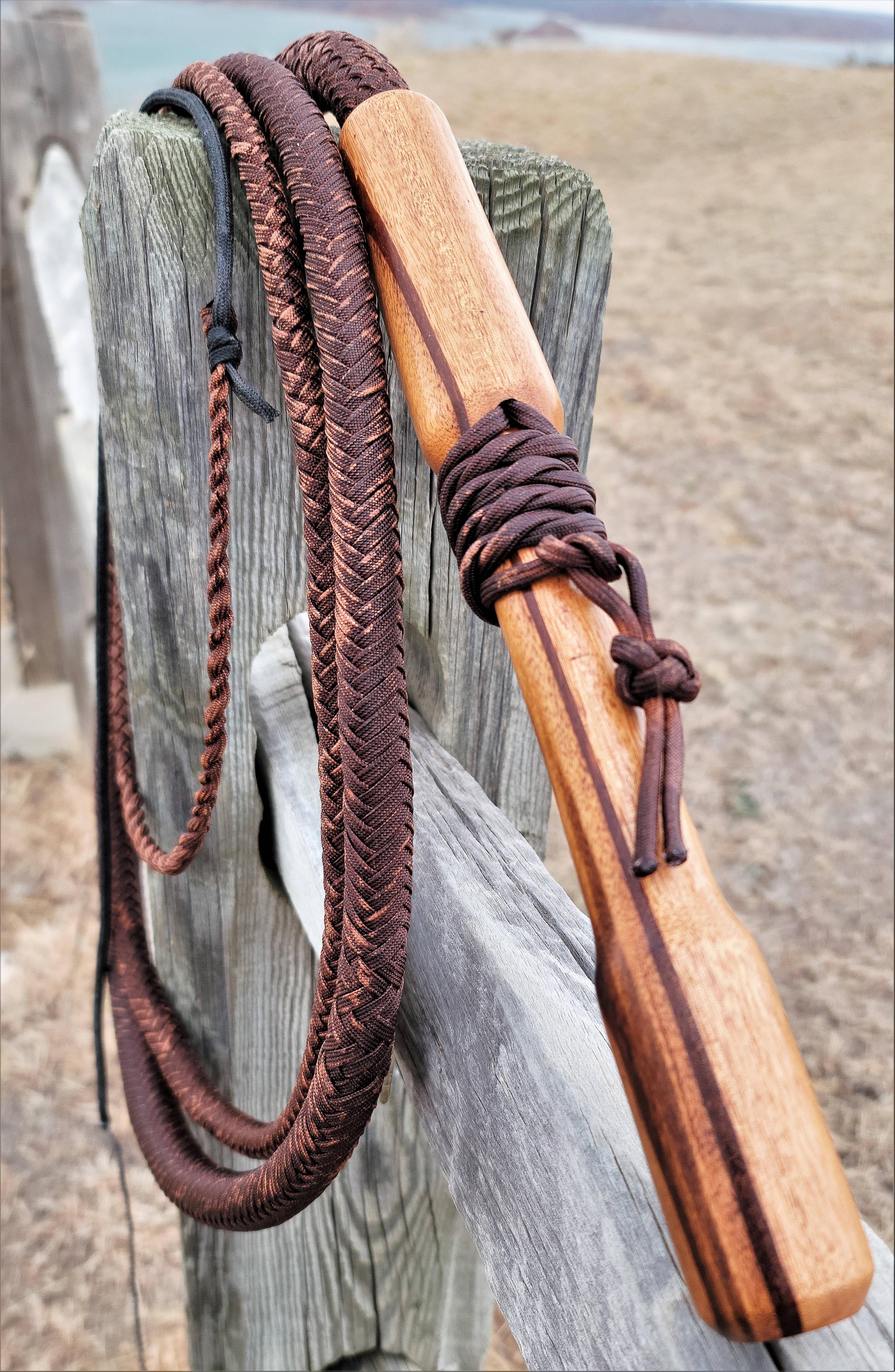 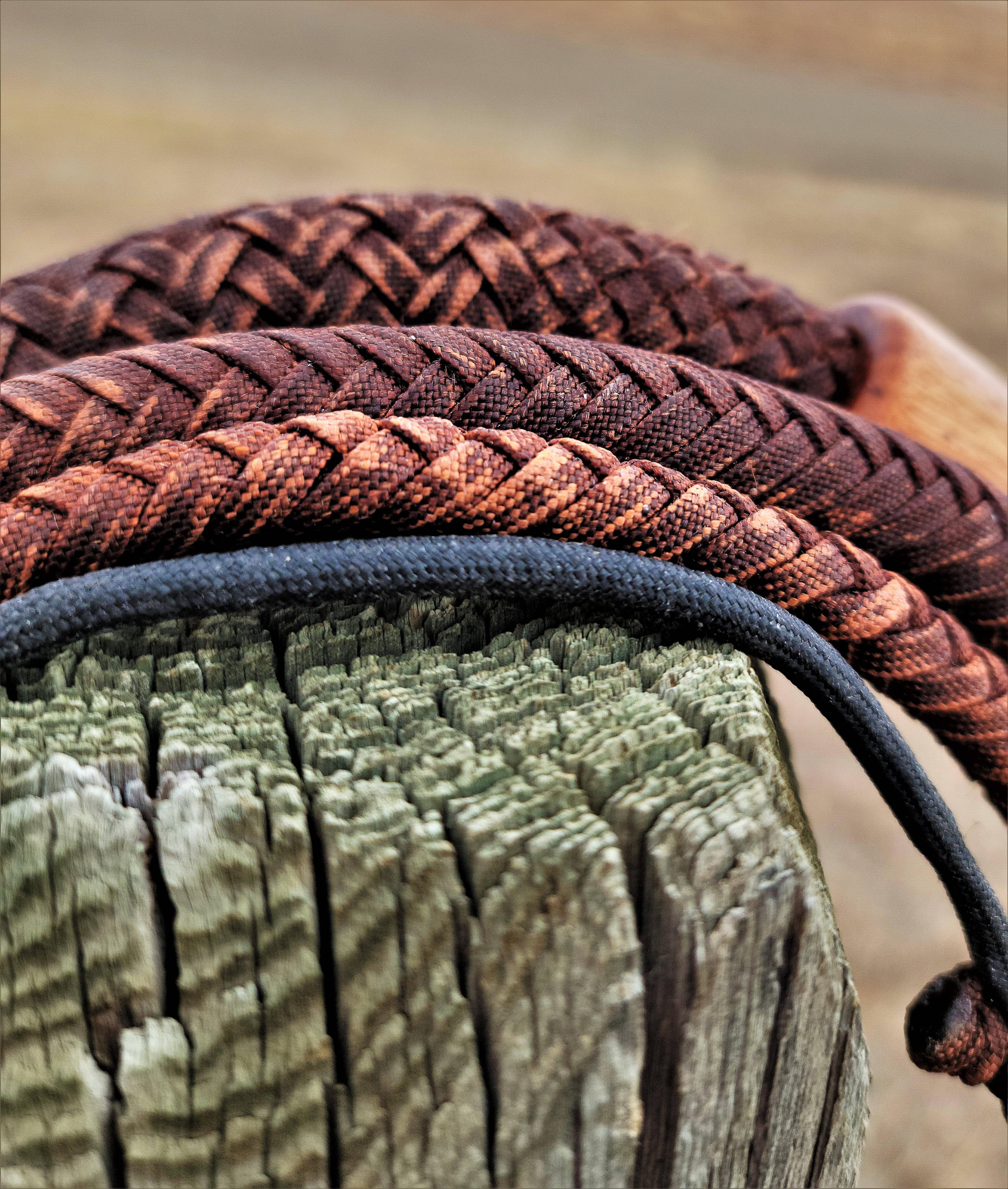 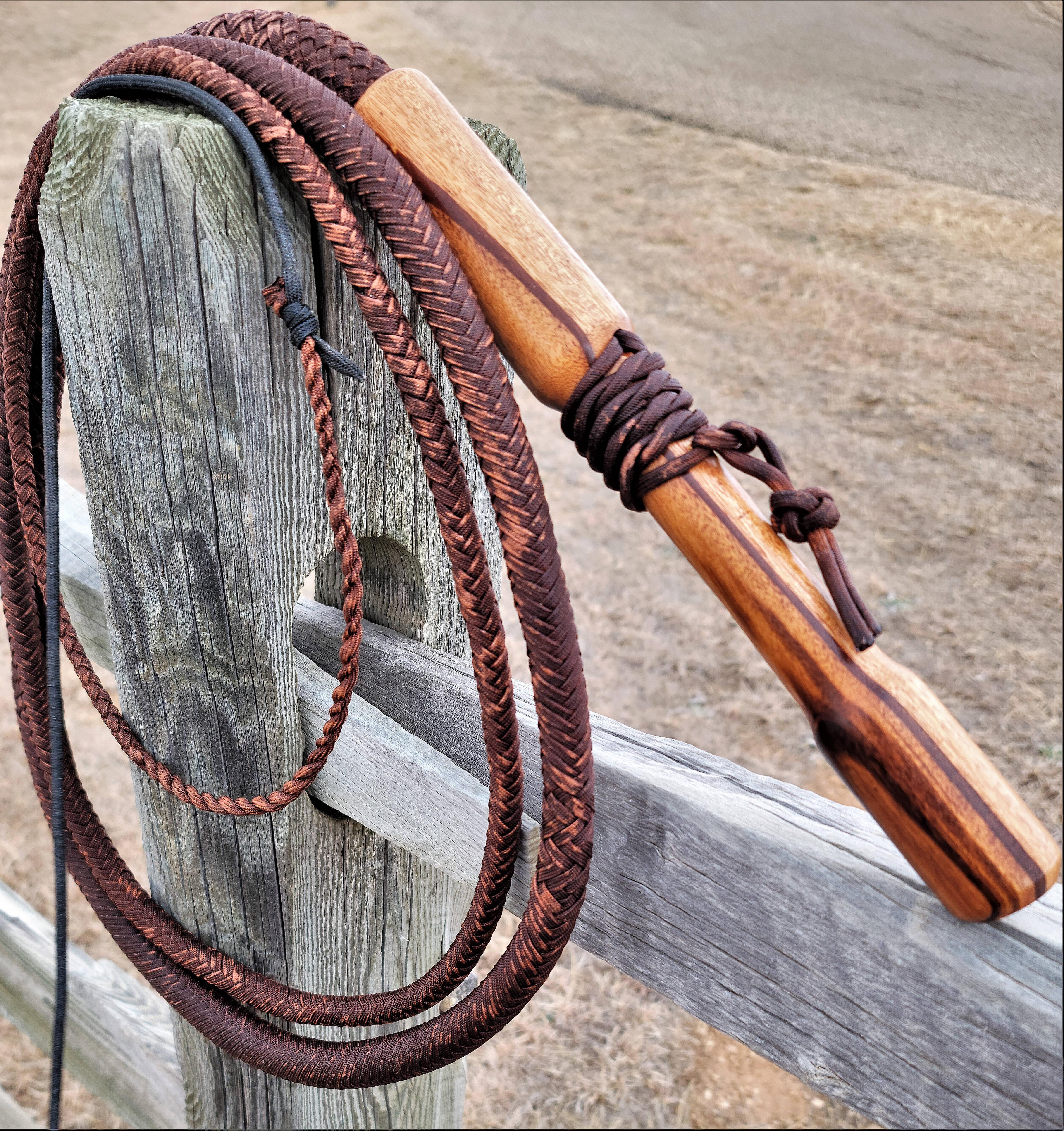 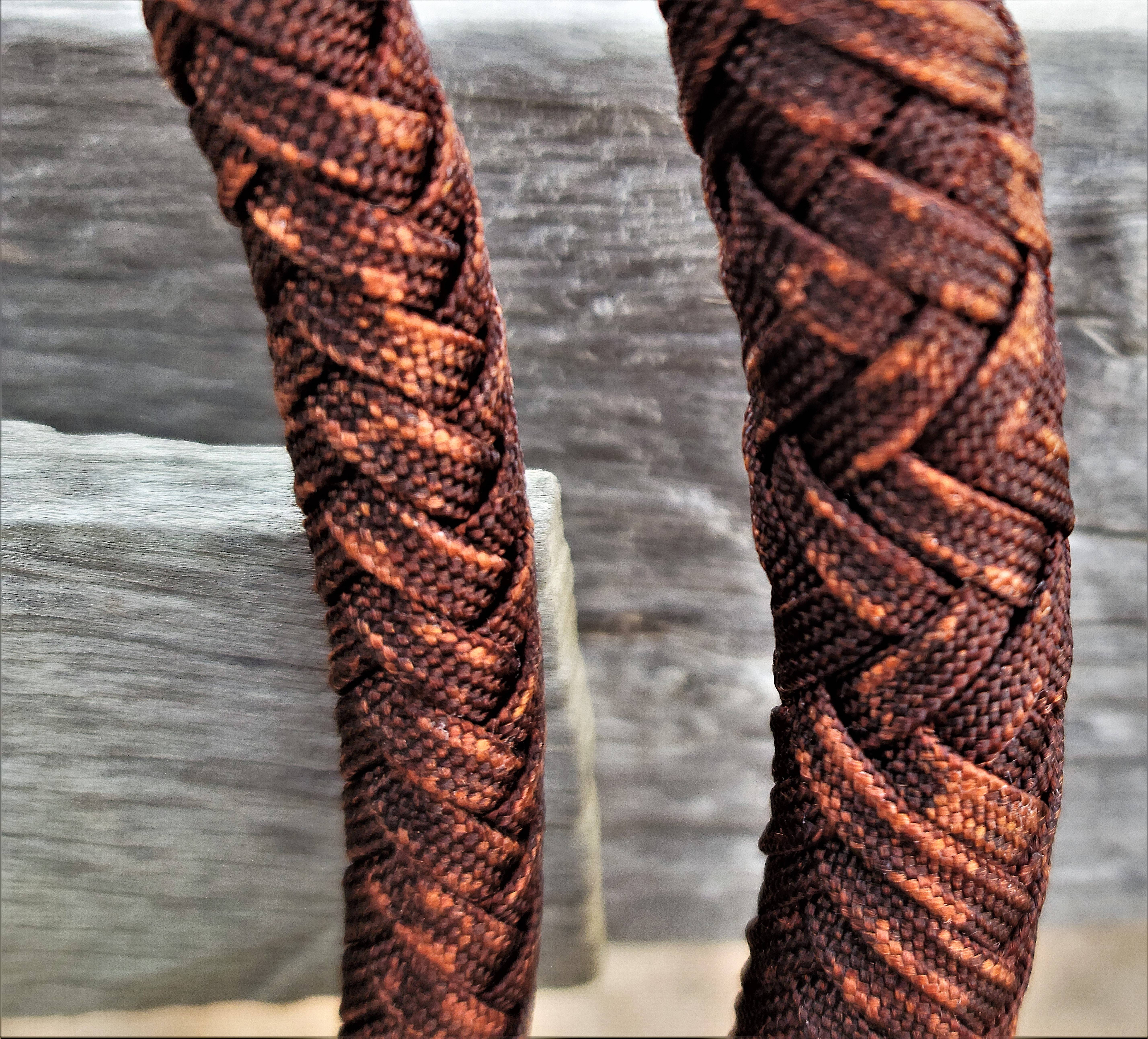 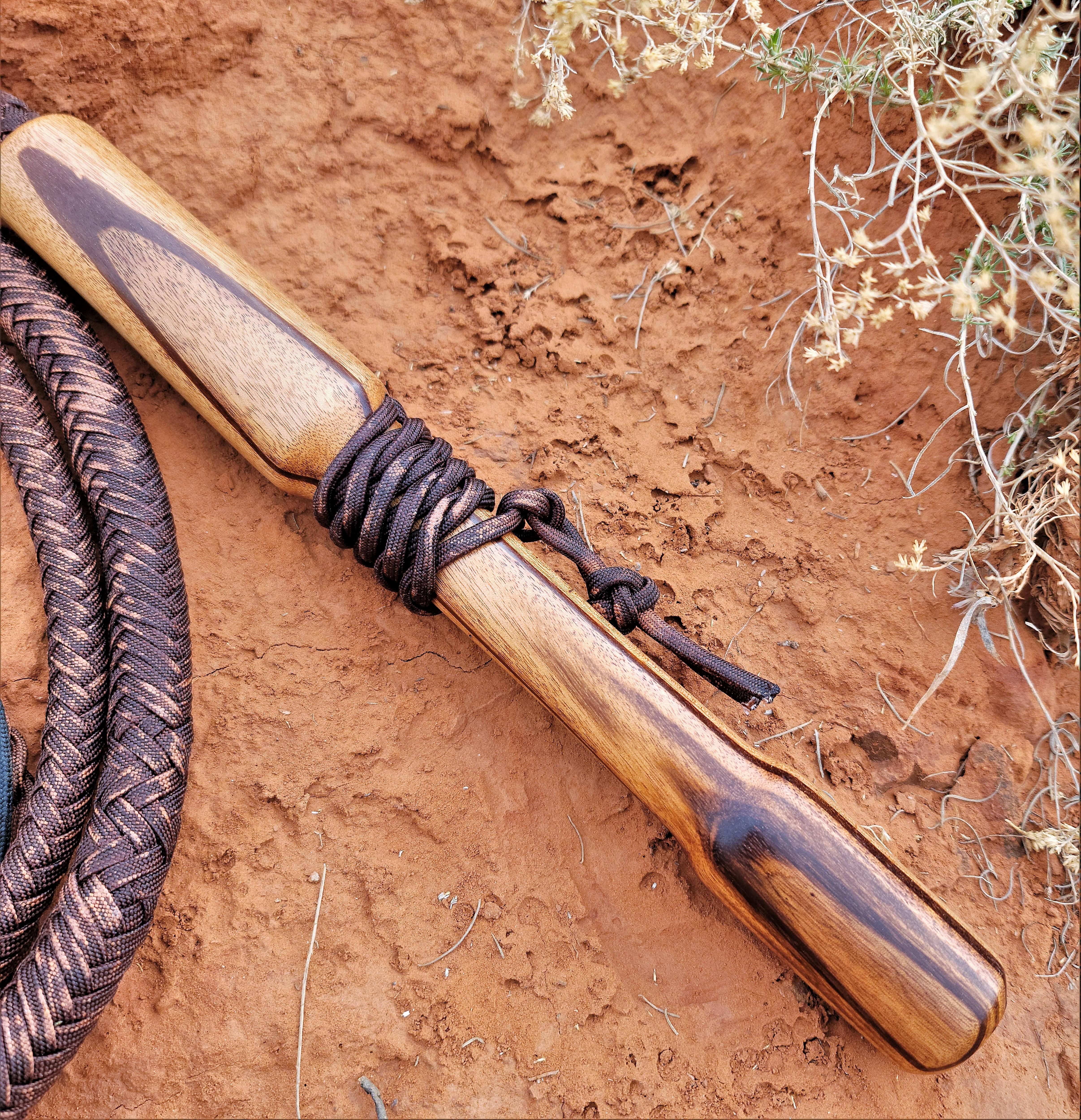 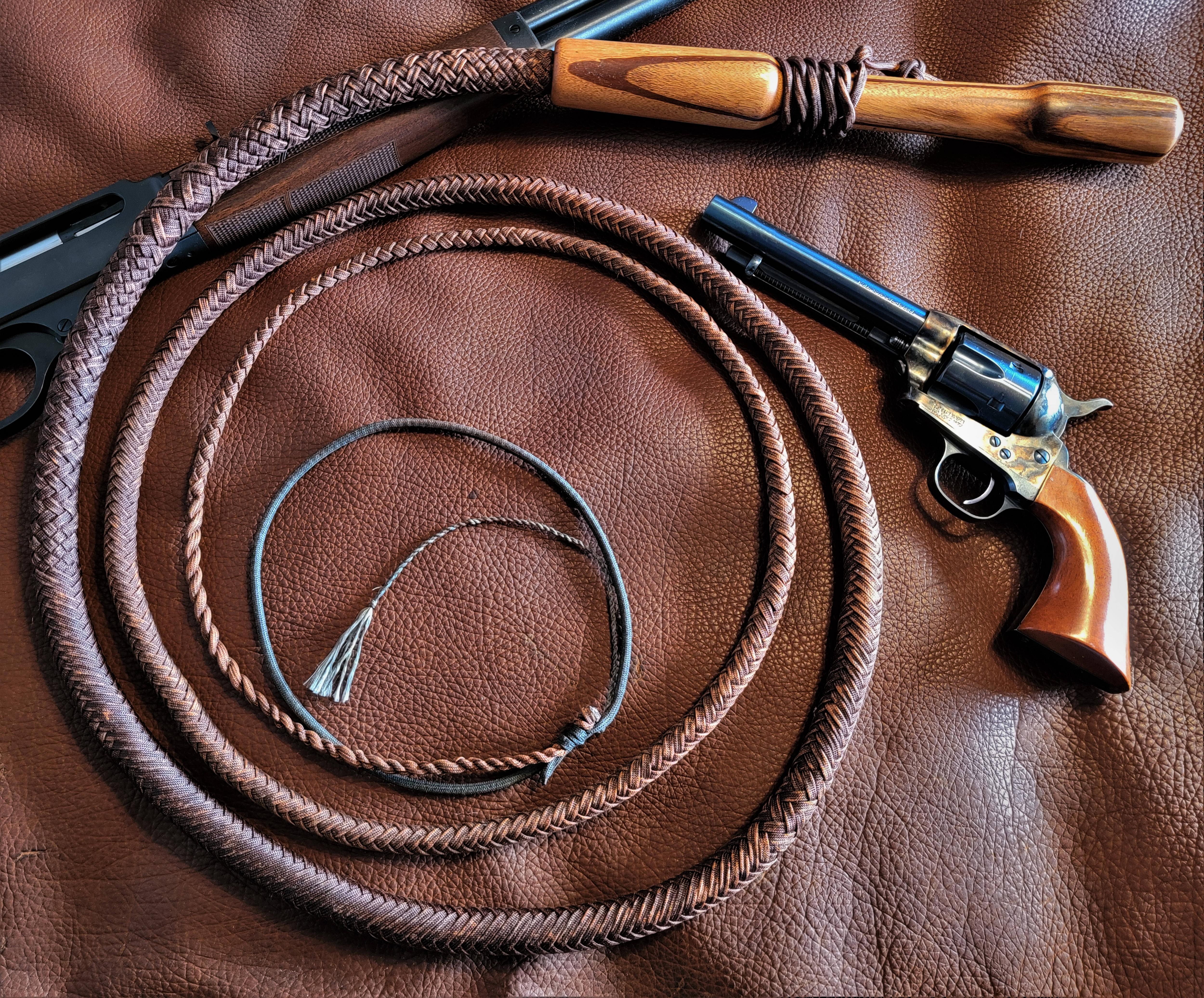 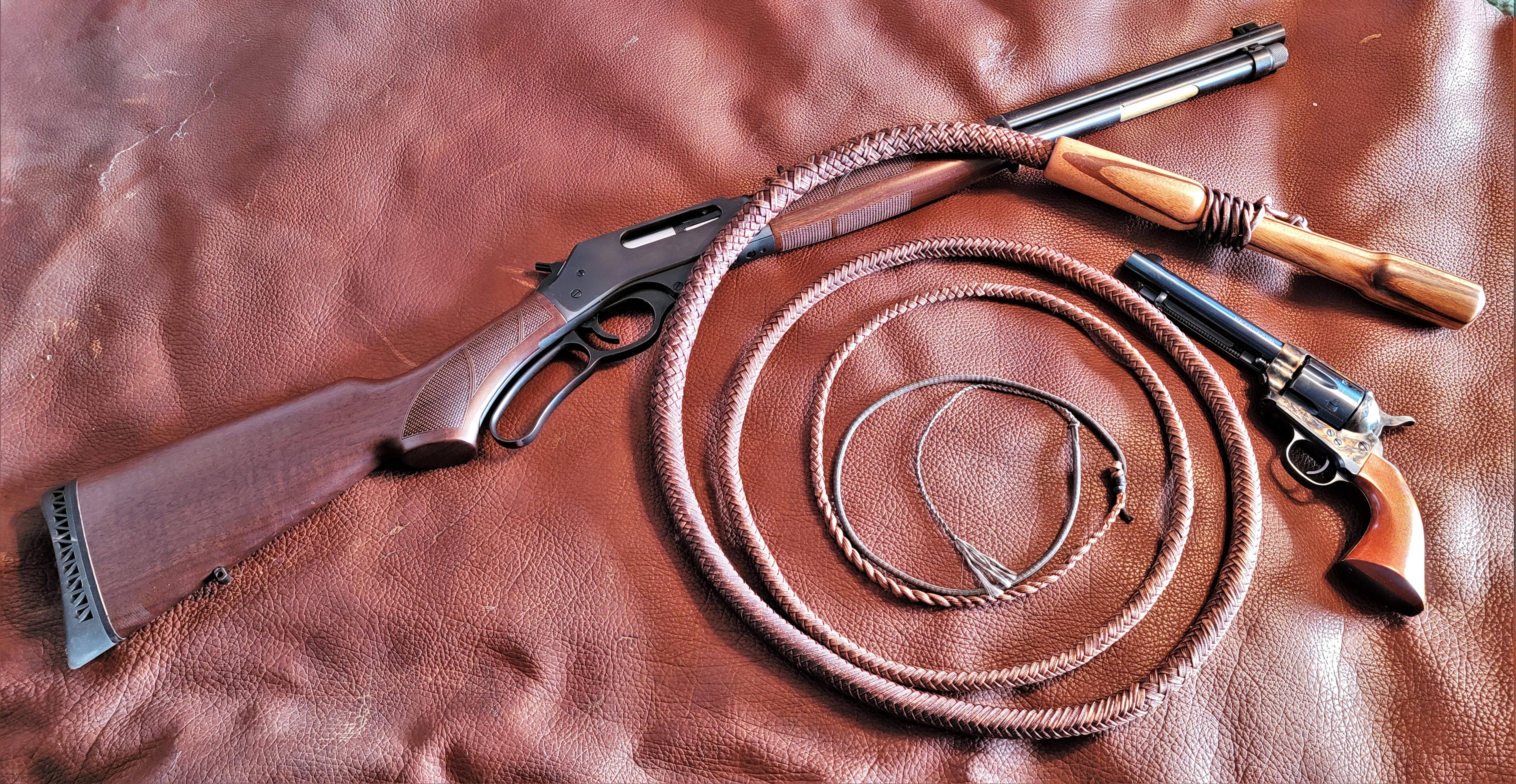 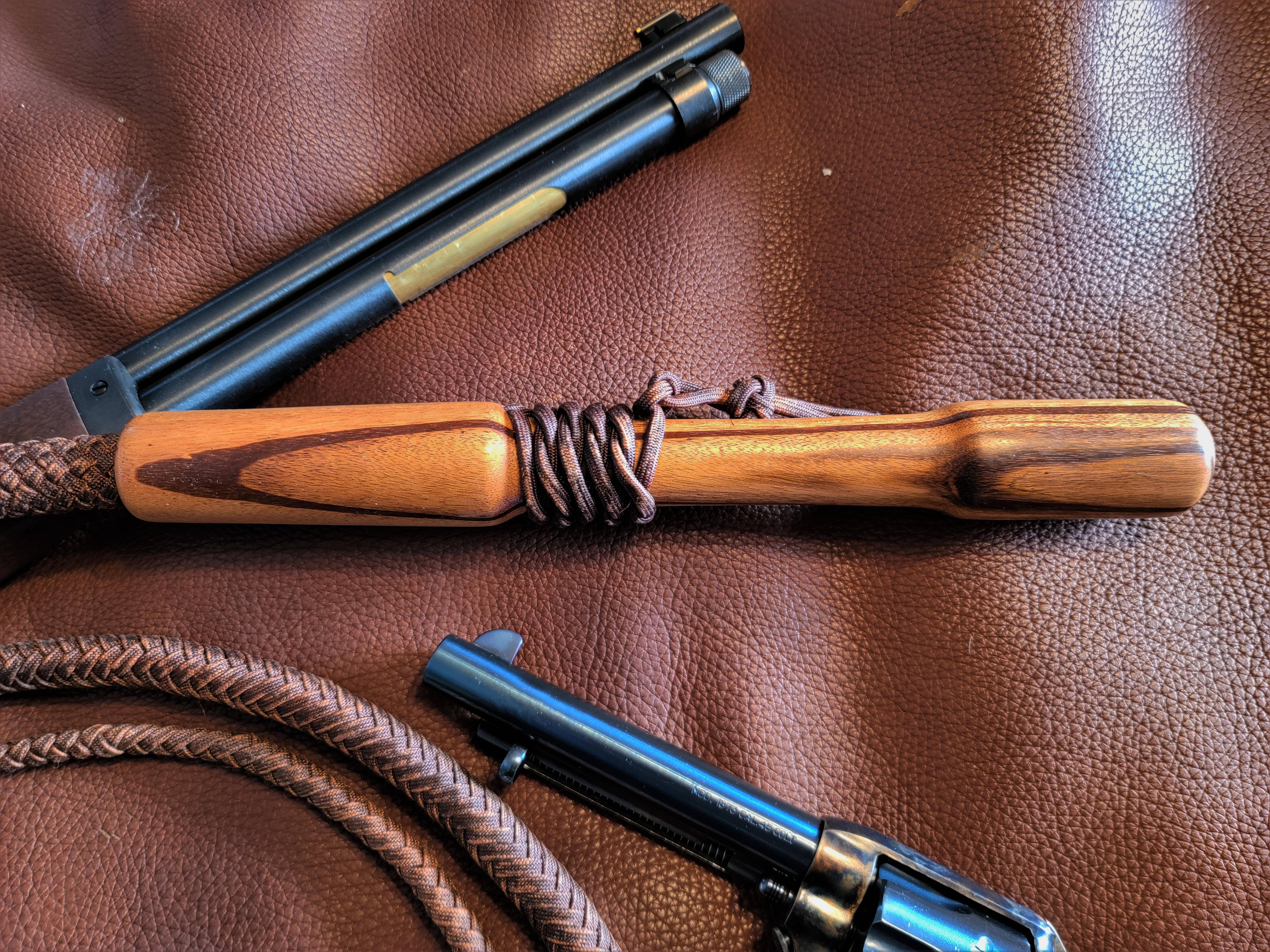 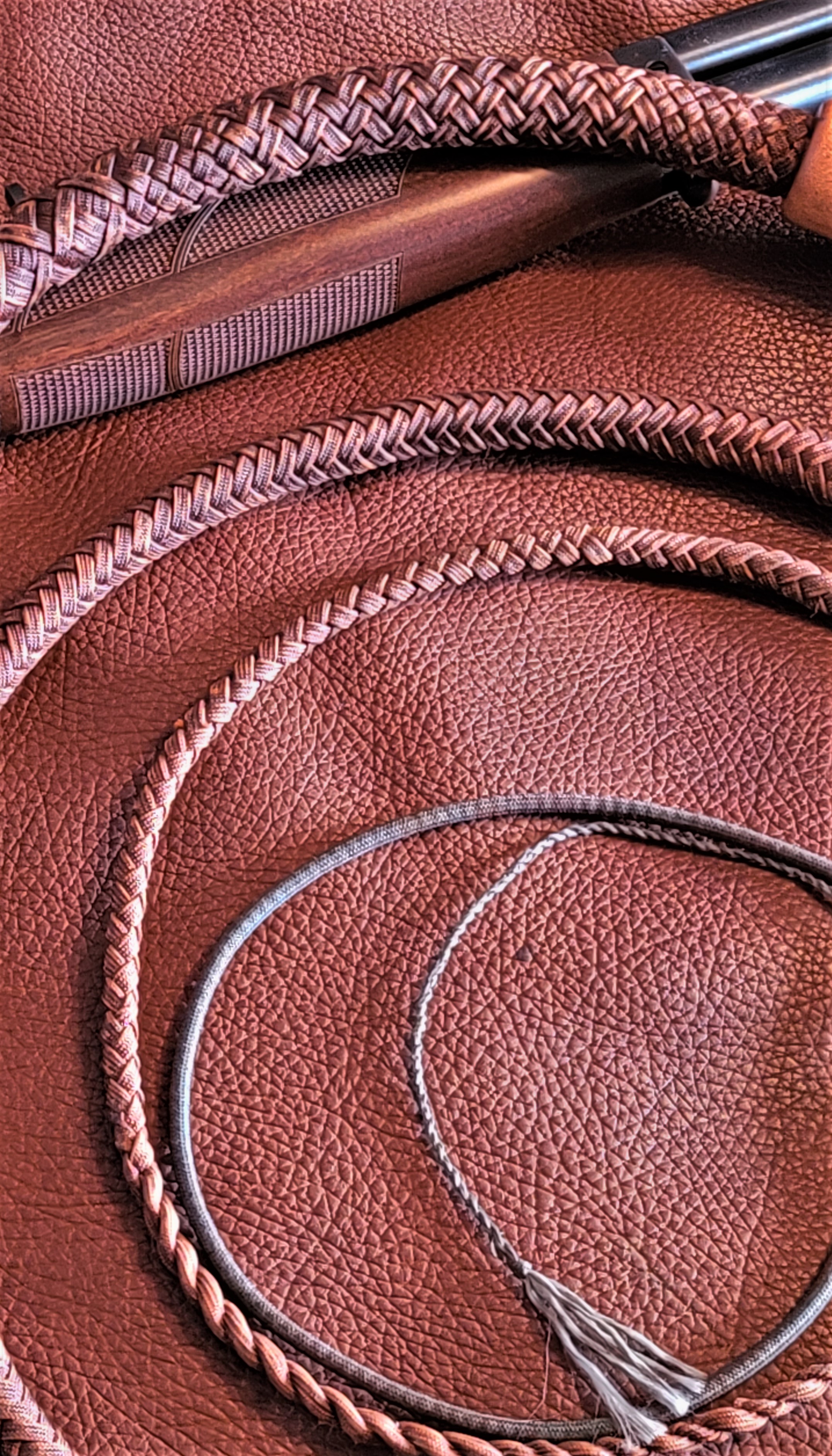 In case you are interested the rifle is a Henry H010 chambered in 45-70 gov and the revolver is an Uberti 1873 Calvery chambered in 45 Colt. Both are fun as hell to shoot. 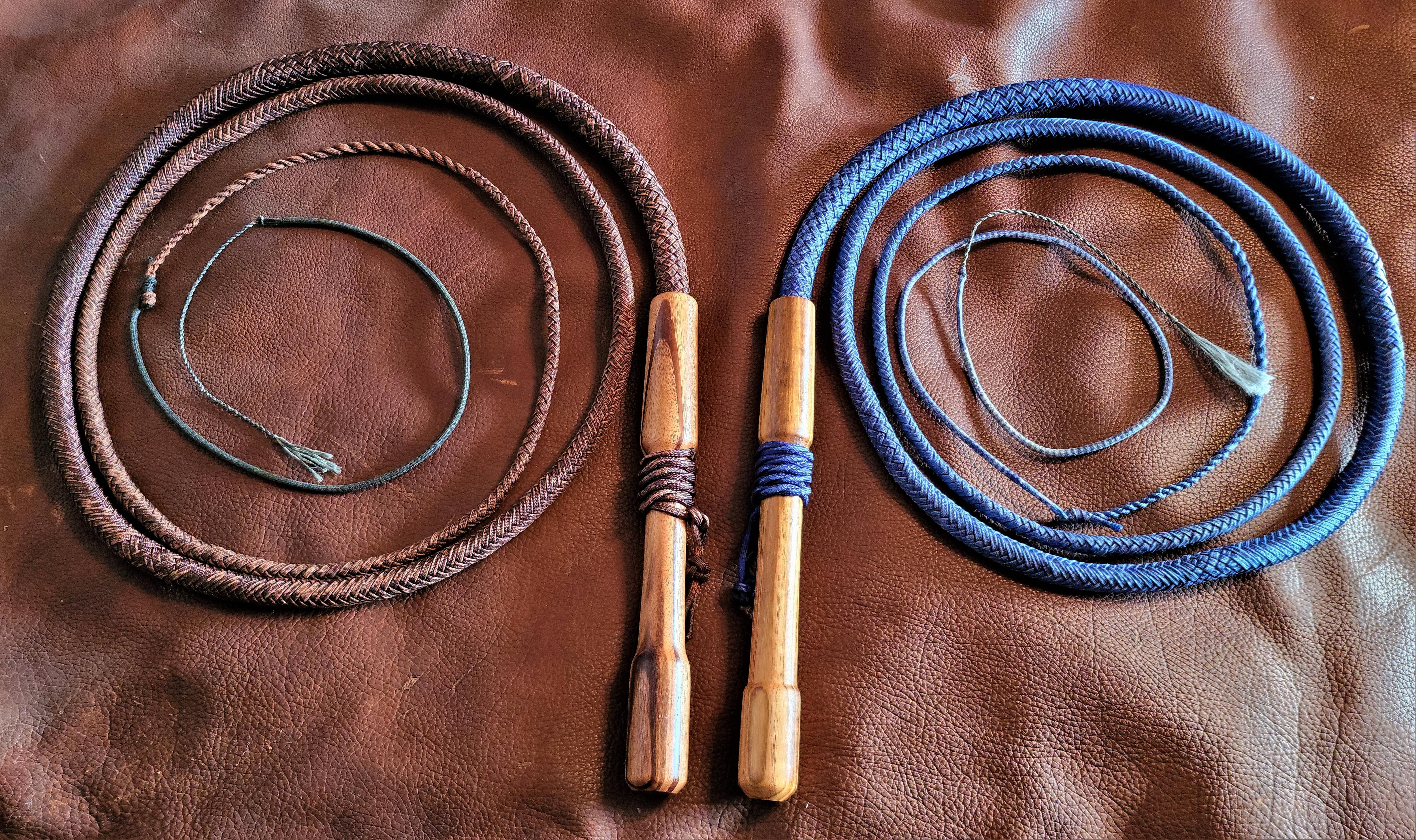 Excellent job. I have held the thought for a long time exactly what your experiment showed. Thanks for the proof results.

I actually stopped using loaded cores a good while back.

Mark, this whip is beautiful, you’ve done it again!

Thank you, Ron and Rachel.

Ron, I've been using mostly TT cores as well, but I was curious as to why so many people use the BBs. Not worth the effort in my opinion.

Well done, Mark!  Two very fine whips - and a most interesting comparison.  As you say, the BBs don't seem worth the effort.

(I actually prefer the look of the rust-coloured whip, for what it's worth.)

Thanks, Robert. I have always favored that rust-colored paracord, as well. I use it a lot.

I 100% agree on TT core over bb.
Solid connection all the way through...

Rachel, exactly right.
Something totally connected will always transmit energy better than one that's not.
I believe the same thing goes with twisted tapered falls as well.

Lead sinker line would be better than BBs but I like the tapered twisted core much better than that, even.
At least that's my story and I'm sticking to it.

Ron, I've used the sinker line with the TT core before. Wrapped it around the core in the grooves. Again, I'm not sure if it made much difference.

Mark, I don't think the difference is enough to use BBs.
Besides, I think a little bit lighter whip with a good roll out is easier on the wrist and shoulders. For me that's important.

Mark that's another beautiful whip and a very interesting experiment, since joining here I've started using TT cores and I agree it's the way to go:)

I realy like the experiment that you've made. I have a cup style bullwhip made by Roy Partin which is the first TT-core whip I own. Even though no additional wieght had been added, it fealt heavier that a BB-core whip with simular dimentions and the flow is fantastic.

The only types of whips where I do preffer a loaded core over a TT in general are small snakewhips or lightweighted bullwhips.

Thank you, Ben. I really think the wooden handle add enough weight to the whip without any need for BBs. For traditional plaited handles I've been adding a bit of lead under the heel knot. I really like the way this balances the whip.