I figured rather then spam a dozen threads, since I'm planning on working through a number of thoughts and ideas, I'd just create one thread to document my WIP as I figure out this whip making thing.

My goals for this next whip.

The core I am doing as 550 ungutted Paracord, threaded through an equal length of gutted paracord, then tightly bound with artificial sinew.

The Taper, I have pulled an excel spreadsheet, and in typical CNC Machinist fashion, tried to shoot a mosquito with a cannon.  I have listed the total number of strands that the whip shall have, from bellies to overlay, and divided the length of the whip into equal sections of the same number.  Then I have worked from the handle, and calculated the drop point for each strand in the belly, and the overlay, to provide the smoothest, most consistent taper possible.  Is this the right way to do it? I don't know, that's the beauty of experimenting, to see what happens.

I even created a graph to show the even taper reduction, then created a similar sheet, but instead simply dividing the bellies and drops at even distances to see how big a difference it made.  Amazingly, the second way there were points along the whip where the taper actually increases, so definitely something I'll probably keep doing to make sure I get the roll out I want.

Unfortunately, I made a stupid mistake on my second belly, one I discovered right at the end of binding it, that has led to a bulge and sudden drop on one side of the thong.  I can see exactly what I did wrong (I didn't cut a strand long enough, and tried to cheat by running it along the thong for an inch or two to compensate.  I can see now why that was just plain a bad idea doomed to failure from the start, but hey, I wont make the same mistake again...)

I plaited the first belly along the starting core till the end, then TT, dropping strands till I had one left, which I let run for a little while.  Then The second belly I plaited till the end of that first final strand, before changing to a Twisted Taper for the remaining 4 strands, dropping the same way till I had a single strand I let run for a little.  Each belly is full Closed Loop artificial Sinew along the length of it.  The 1st Belly I wrapped in Hockey Tape afterwards, but I found the grip was actually making it hard to pull my strands tight enough, will have to investigate further if there is even a need for doing it (Was kinda just following Nick's lead there, without perhaps understanding the theory behind it?)

I don't plan on wrapping in Hockey Tape before I overlay it thought, I want to be able to plait a nice looking and consistent finish to this whip.  I am thinking of finishing the Overlay in a TT as well, but haven't decided yet. 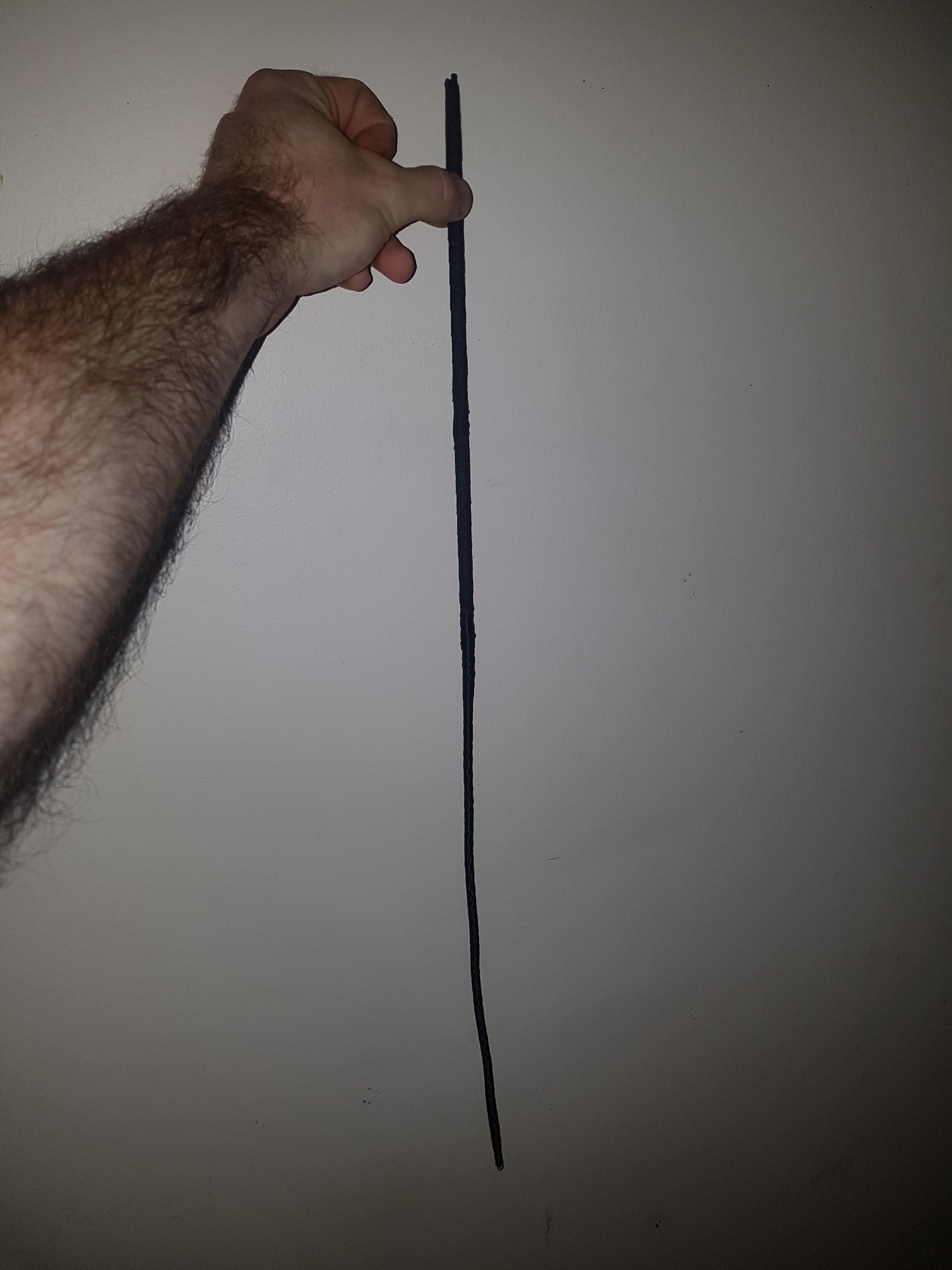 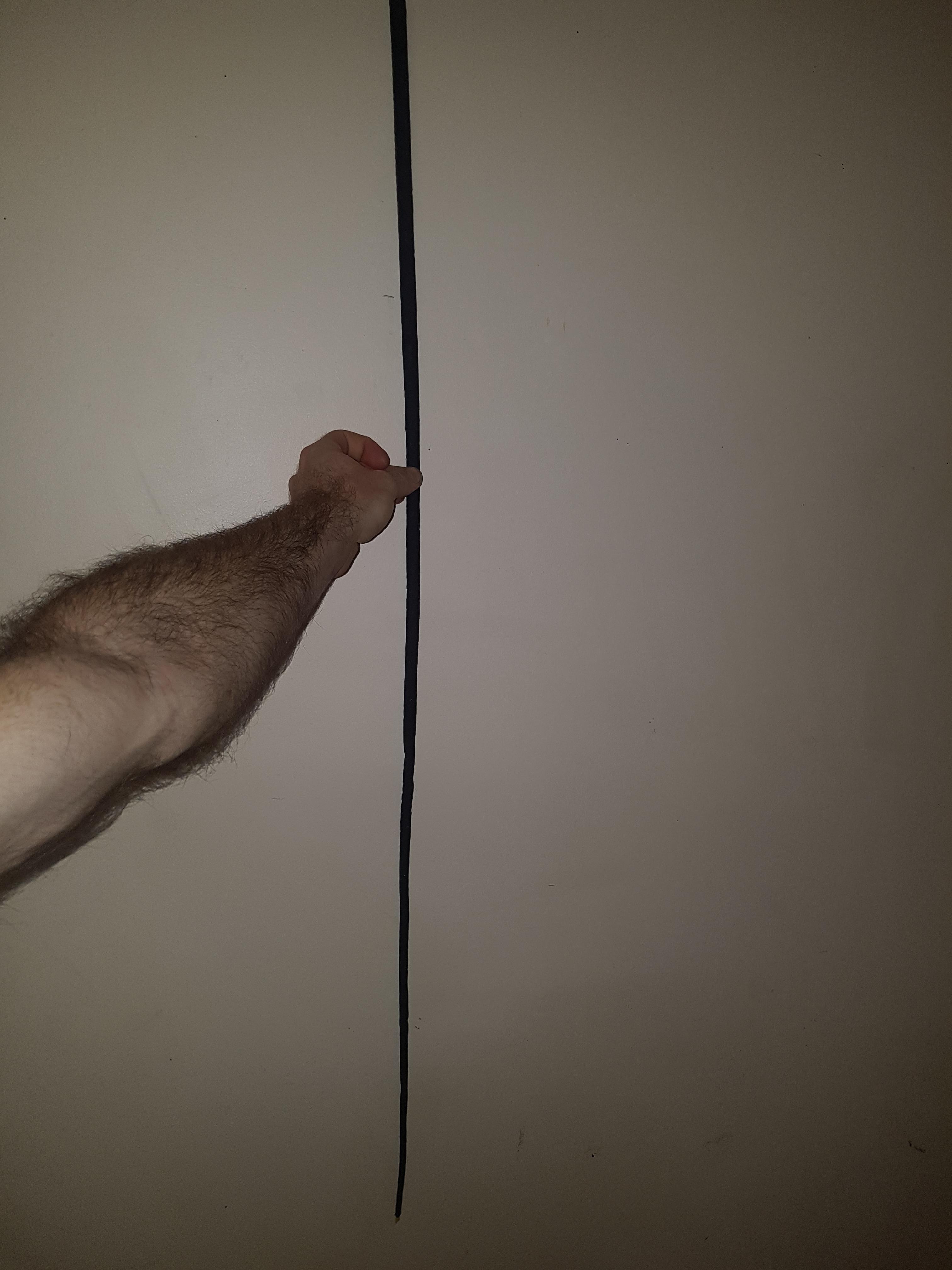 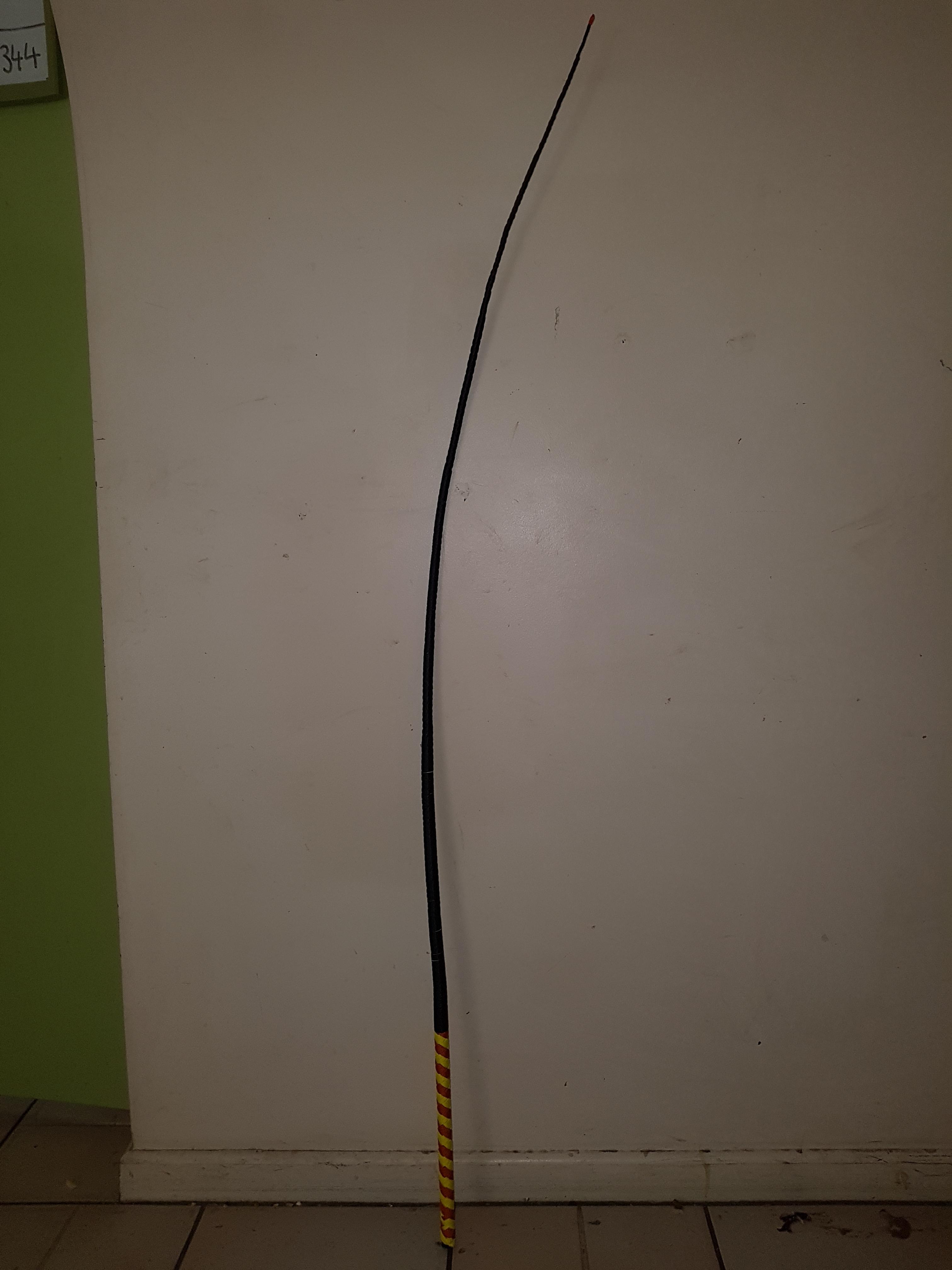 It's looking like a good start.
Personally I don't use any tape for a bolster or anything else. In a leather whip a bolster might be necessary but in a cord whip not so much.

But that's my own personal preference. There are just as many methods of making a whip as there are whip makers.

I'm thinking I may ditch the hockey tape, I can't see a need for it.

I am also going to go back and fix that lopsided drop on the second belly, I am just not happy with it, and am not on a mission to churn out whips as fast as I can; I want each whip to be better then the last, and it would just upset me to see that there knowing I could have fixed it.  I'm pretty sure I can tease the strand out without having to unplait the whole thing, the OCD side of me says that that ruins my perfectly planned taper, but I know that it is more important to have a nice round cross section the whole way through.

Going back and redoing things is the way to go, in my opinion.
It's a great sign of dedication to making each whip as good as it can be.

I'm still not 100% happy with it, but I don't think I can do much more with it either, so will have to chalk it up as lessons learnt for next time. 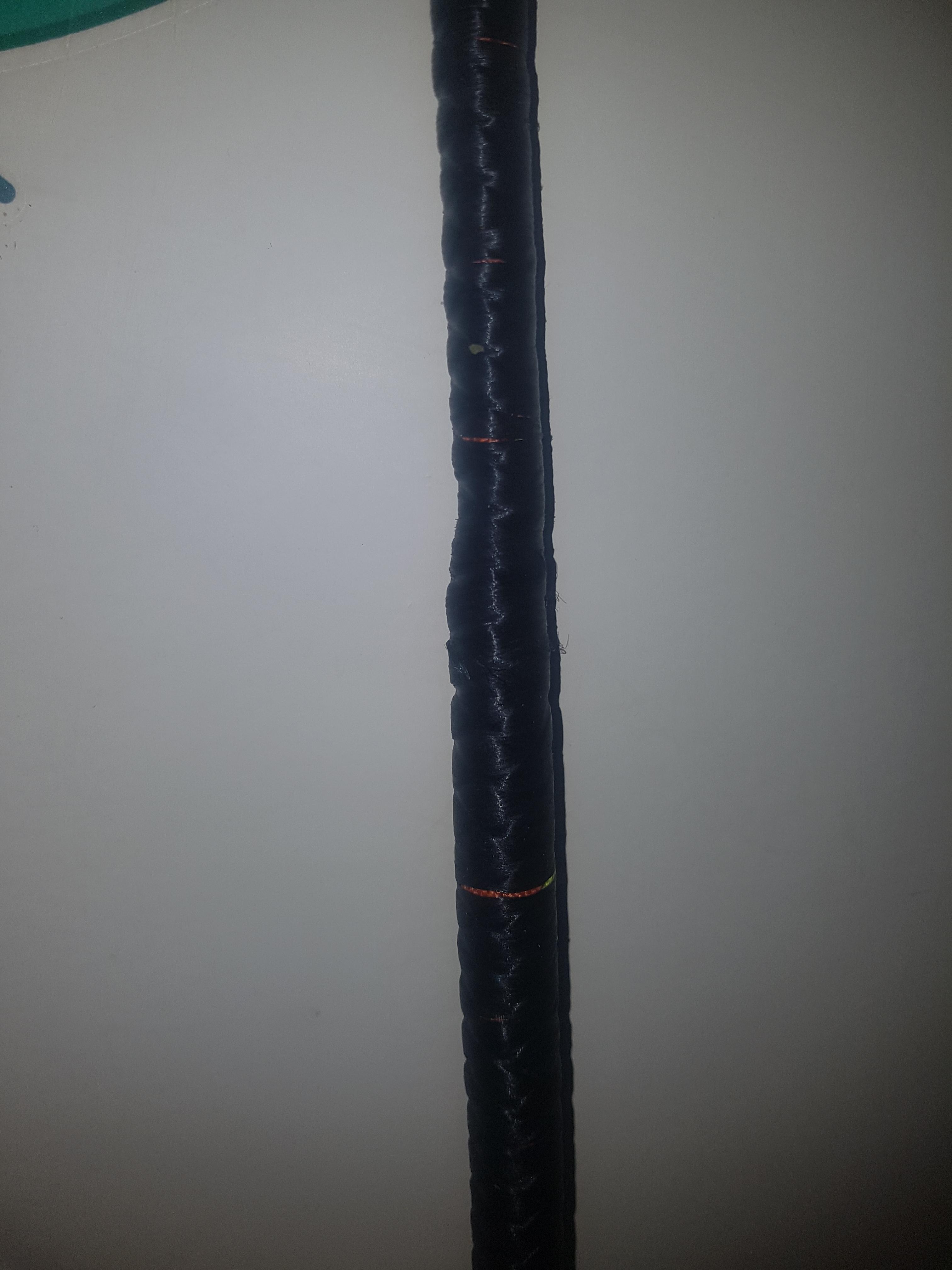 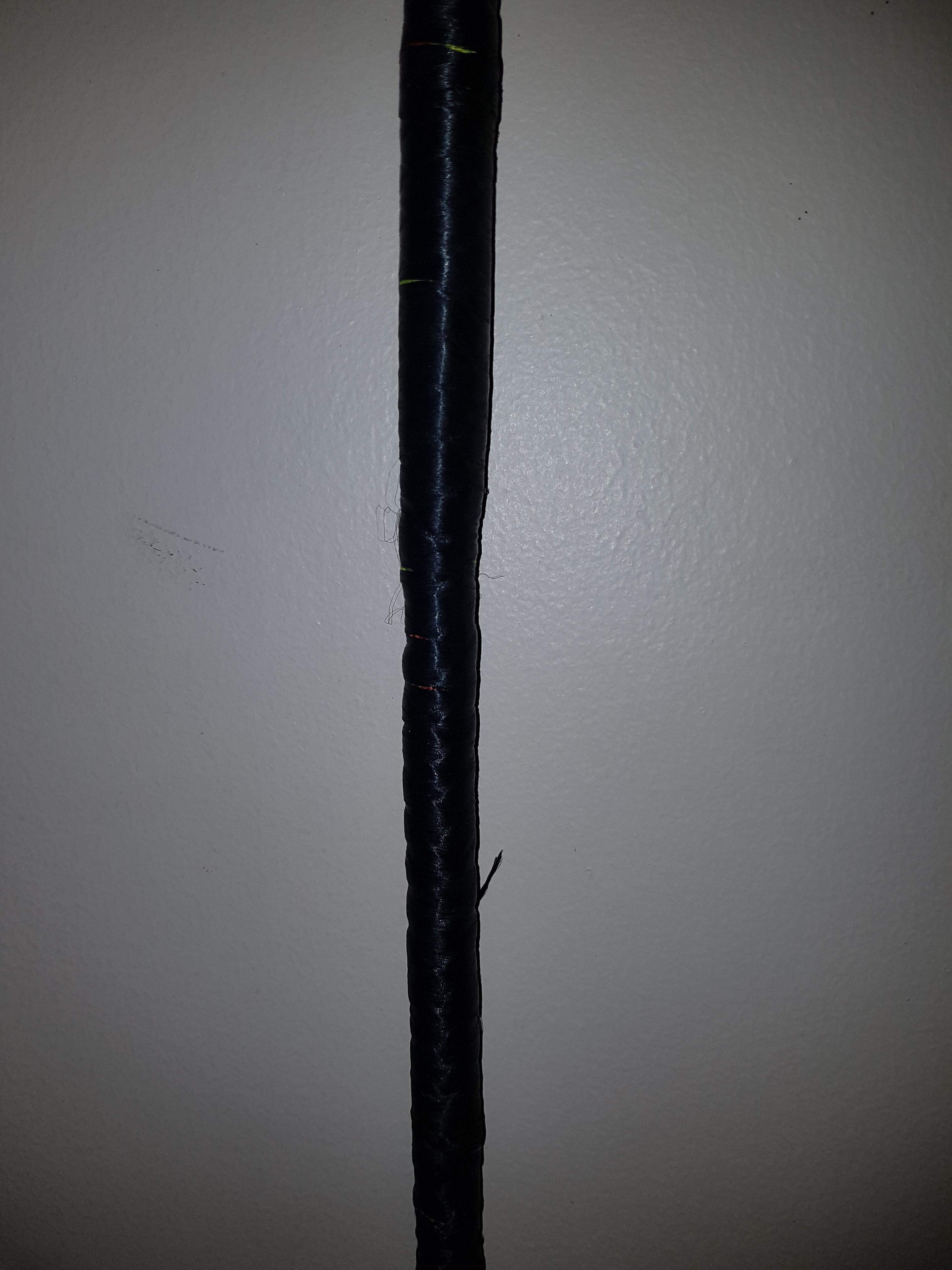 Lighting isn't amazing, but here is the start of my overlay.  12 Plait (going to be a 4 footer).

I'm a bit annoyed, I made a mistake somehow at the start and despite my best intentions somehow ended up dropping the strand that is alternating, so the remainder of the whip shall be an even split between black and red.  Another lesson learnt, haha. Finished the Overlay.  Seam isn't as straight as I would like, I botched up the cut lengths (Trying to calculate my own, more things I have learnt [tm]), and I am unhappy with several of my drops, and will have to practice those.  I did figure out what I did wrong on my pattern, so know what not to do next time.

I don't have enough paracord to make the heel knot, so it is now on hold until I get time to visit the paracord store and buy some more, but overall I believe I have made some improvements over my first whip, and the next shall incorporate the fixes to the mistakes I made this time.  Onwards and upwards, as they say. Andrew, the seams aren't bad at all. You have already found the faults and have plans to correct them, and being able to see what needs improvement is a great start in fixing them. A couple of things I've learned is always cut the strands longer than you think you'll need, and wait as long as you can to drop. Gaps are almost always caused by dropping a strand too soon.

From what I can see the seams are not bad.
It also looks like a nice taper.
When it's finished you'll have to tell us how it cracks.

The Minister for War and Finance has nixed any plans to head Into the Paracord shop for a few weeks, so in a fit of impatience I have waxed the whip, and attached a cracker too it, and shall add the heel knot when I get more materials.

So I have now cracked it, and must say, I actually prefer cracking the 7' whip to the 4'. But, aside from that preference it rolls out nicely, and gives a good, easy crack.

The carbon fibre handle is a bit different, I'm not entirely sold on it either, I think I prefer a touch more weight in the hand, so shall go back to SS.

Next whip shall be a twofer set for a friend of mine who has been eyeing off my efforts. They'll be 4' charcoal grey with a teal accent. And a 6-7' with a couple more blues in a similar chevron pattern to my firewhip, built on the same charcoal grey base.  Going to go SS handle, TT core, and try actually finish the overlay off in a TT as well this time.

Watch this space for when I am not broke again

New 4' started.  I am trying something new for the Handle this time.  Using a TT core made with ungutted 550 (Huge thank you to Rachel for her video), but inserted into a hollow steel shaft, the first belly looped through and pulled up inside the core and started from the top, so the Core is attached to the first belly, no way it can possibly detach.  Then Artificial Sinew bound over the top, so the thong is attached to the handle both internally, and externally, shall see how the transition handles like that. Belly's inserted through loop in Core (Note, I had to drop two of the strands, because it was too thick to fit into the Handle, it was a snug fit just getting the core and one loop through.) I thought I would share the method I am currently using for calculating strand lengths, drops etc.

By no means is this necessarily the best way of doing this, and I am constantly tweaking, changing, and completely scrapping my ideas and methods as I learn more, it's just where I am currently at.

Currently, my thoughts on providing a consistent taper runs along the lines of taking the combined strand count of every layer, and dividing the length of the whip by that number, that gives me my base "unit" for calculating drop lengths.

Then on the spreadsheet I assign one cell per "unit". So for example on a 16 plait overlay, with a 12 and an 8 plait belly, and a 4 strand TT core, at the thickest point it will be 40 strands combined. On a 48" whip that makes 40 divisions at 1.2" per divisions.  Then I lay out the bellies, dropping strands to try match as best as possible the straight gradient from 40 to 2 (finishing each belly and the overlay on a TT), also making sure no strand is dropped at the same time on different bellies.

Here is a link to the spreadsheet I use.
https://docs.google.com/spreadsheets/d/ … p=drivesdk

That looks very interesting.
I have no idea of how it works or how to use it but it looks very efficient. Charcoal grey and Teal. Nothing fancy platting wise, a square start (a little messy, still getting the hang of it, but the heel knot will cover that), and a simple two strand check for the handle I think.  Will work on fancier patterns when I get more confident, for now this is my first attempt at anything more then herringbone.

Found some time to work on the thong, practicing keeping my seam straight, had a little waver right at the beginning, but it's getting easier as I go along, working nice and slow, building a good working rhythm for now, done about 11", so nearly a quarter of the way there.  Thinking I might make turn myself a simple brushed stainless steel Conch for this one, keep it simple and elegant.