Tell me your story

Robby, it is very similar to when sometimes emergency services are called. We go, get there, then sometimes the ...prospective client... no longer wants help or become until
uncomfortable when they are asked to describe the problem and go to get treatment.

People are funny. Endlessly interesting, but funny (bunny funny). You cannot give help when someone does not help themselves a little.... By at least following through with the asking!
Inch by inch.
Top

Robby, I think what people are prepared to pay for a whip - or indeed, for anything - depends on all kinds of factors quite separate from the quality of what they're buying. When Mercedes Benz promoted their cars in Britain some forty years ago, they made them more expensive than most others - presumably on the basis that people would think they were that much better, and buy them! They are good cars, but many people bought them with little notion of what makes a car good or bad - just because of the high price. The strategy worked!

Mercedes were good enough, and well-enough known, to trade on their name. I suspect that Mr Schrader is a very astute businessman. I've never seen one of his whips, so I can't judge their worth; but he may be trying the 'Mercedes tactic'. Well, good luck to him - but, thanks to you, no one need be fooled into thinking his whips must be good, just because they cost a lot!
'Less is often more!'
Top

After what I have seen, the whip prices from some whipmakers in the US are pretty much higher than from the whipmakers I know from US , EU and Tasmania. I don't think the quality/price ratio match.

The expensive whips can not - in my opinion - be worth the price compared to what you can get from well estimated whipmakers that I know.
Today is a good day
Top

I got a whip in from a rather large entity online, nylon. Seems to be a great deal of melted nylon in the whip, right down to turks head. While I am impressed that someone would go through the hassle of melting chord into a ball, I'm wondering if I got mega-scammed.
Top

Guy, is it just a single strand at different places on the whip or is it large multi strand sections? Neither is good, but if it's just single strands it may be that they dropped strands by jusy cutting the strand and melting it to keep it from fraying. Lots of nylon whip makers will do that on a belly (me included,) but it's not the proper way to do an overlay. Pictures would help.
"Always be on the lookout for the presence of wonder." -E. B. White
Top

I took a close look and it's the fall hitch and it's totally sealed. Melted and I would venture to say epoxied after. I have been reading on the site as well as posting but this made me take pause.

I think I just got scammed for $110 by a reputable guy.
Top

If this is the way he makes whips, I would venture to say that his reputation was ill deserved.

Excuse me, fall keeper knot. I'm new to all this and I'm more than a little riled.
Top

Is it possible that it has just been heavily waxed?
"Always be on the lookout for the presence of wonder." -E. B. White
Top

Also, sometimes some whip makers dip the heel knot in rubber.
"Always be on the lookout for the presence of wonder." -E. B. White
Top

Show us pictures. 110$ isn't bad pricewise if the heel knot is simply rubber dipped. it's a thing. if it's honestly melted, well I'm honestly confused, since I've never seen such a thing. Bobbi Holyoak used to talk about a "seal" on her fall hitches that she would not warranty if she saw the "seal" had been broken. What that seal was is beyond me. Also, Guy, I have never heard of the whipmaker that you are mentioning. Like I mentioned in another thread, there has been convo's in PM, but I think it is ok to discuss who made your whip. Gregory DeSay? Here is his website:

Looking at his whip pictures, I'm not seeing melted heel knots or fall hitches. I see a rather limp transition and obvious strand drops, however, but what does concern me a little are the descriptions:

Snake whip: "Our snakewhips consist of 16 strands of nylon paracord braided over a shot-loaded nylon core."

What is he saying here? He shot loads the core with no binding and simply plaits an overlay? He does not mention bellies or binding. If you look at a photo, you can see the whip as kind of droopy? Regardless, one has to go back to the beginning of this thread where Robby talks about charging what you want. If someone is willing to pay the money, that is not a crime.

What is dishonest is if the customer is told the bellies are bound with sinew and they are coated in shrink tubeing. If they are told there are 2 full bellies and there are none. I don't see dishonesty here. He says there is a shot loaded core with an overlay. If you look at the photos, you can see it is a little droopy, like it hasn't been bound much, if at all. 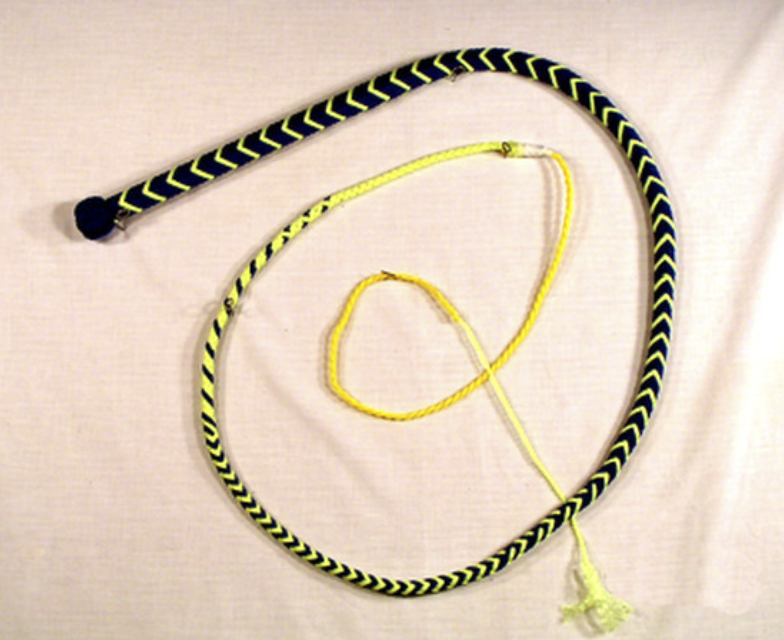 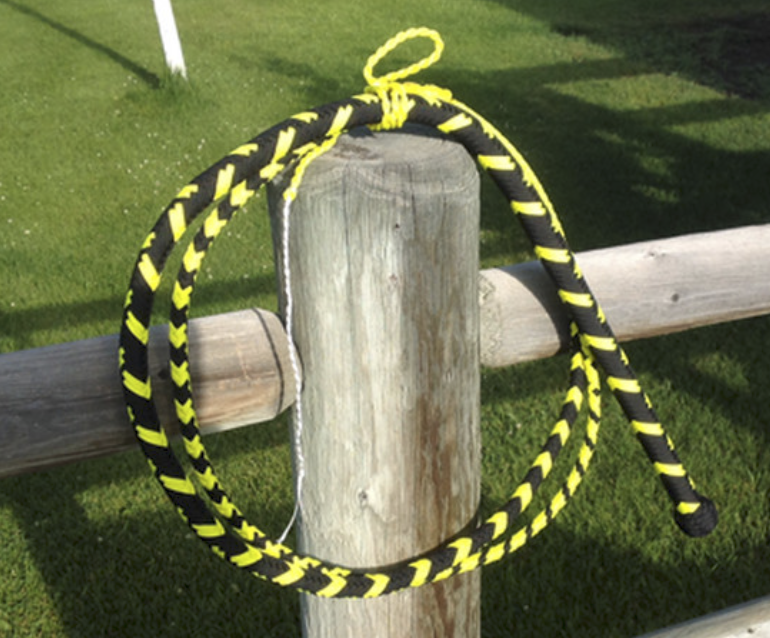 It's not wrong, really, it's just not asthetically "perky." He makes no claim to perky, so I don't see a real problem personally. It's a beginner whip and the price isnt horrible. The plaiting is straight and I don't see gapping. You have a solid fall hitch. His popper is just a piece of paracord it looks like, that's...meh. But, not unheard of. A popper is easy enough to switch out.

These are working whips, so as long as they work, it's fine. The price isn't horrible, but if you get 300$ for a whip, take it. As long as you aren't lying to someone about what they are buying, it's on them to pay for it. Shit, if I could get 300$ for an art whip I would cry a little bit with joy. Unfortunately, I cant sell ice to a guy dying in the desert, so I have to take what I can get when I get it.

As for the knots, I am not seeing the melty anything in the pictures, so Guy, please take detailed photographs of your whip, nice and close, at the problem areas and we will look at it for you.

Lastly, I want to say that questioning someone's work or looking at it closely is not mean or slander. It's common business practice to study other's work. This is how we know what to avoid or improve on. Slander is defined as stating something as truth that is a proven to be a lie. Libel is writing and publishing lies as truth. I think customers unwilling to come forward are afraid of slander/libel charges. You cannot be sued if you claim something is advertised as bound and waxed and it obviously is not. A good merchant will take the product back and return it. If they refuse to warranty their work or back their own claims, THEN it's time to speak up and investigate. Again, there is nothing wrong with that at all.

Guy, as a member of the Ring, I think I can speak for all of us when I say, there should be no insults to the maker unless you feel that he lied to you. Personally, I don't feel that you were. You bought a whip and it could have been built better, but it works and you are able to learn on it. Now you have information on what you should look for in a good whip (think shopping for a car and bought a brand new Geo Metro, which works for what it is, but is the same price as say, a PT Cruiser, which some would say is a higher quality car overall. The Geo is no longer even made because it was dangerous, but those that had one and didn't die driving them, loved them. They worked for what they were. The basic PT, same price but much better quality. Owners of those could say they made a more informed decision, but certainly can't go after Geo for lying, because they didn't).

You, from what I can see, bought a very basic whip for a price you agreed on. It plainly says it is a shot-loaded core with an overlay. There is no claim of a sturdy foundation in the form of binding or extra bellies. My only concern at this point are the melted knots you are talking about, that I would have to see. If they are a big melty mess, I would politely write to this whipmaker and ask what the reasons are behind the change and if you don't care for it, ask the maker to take the whip back and do the knots over. If he refuses, then we can look further into the story.

Sometimes, as whipmakers, we develop things as we go. I have taken to flipping from the traditional fall hitch, to a tapered twist or english eye. I haven't decided how I want to go, but I think I will do any and all of them depending on the cord I am using. 275 will have to end in an english eye or fall hitching because it is far too small to thread into itself. However, if I sell a practice whip and do an english eye and the pictures on my site showed a fall hitch and my customer disliked the eye, I would gladly take the whip back and redo it to reflect the advertised hitch if the customer wanted. If I refused, then I would be subject to the wrath of the Ring. That's how it goes in as wordy a way as possible, but there it is.
Due to rising costs, dirty deeds are no longer done dirt cheap.
~Management
Top

With this further information, I can say that Jessie is right.

It is what it is and and doesn't claim to be otherwise, so his reputation, what ever that might be, is earned. I too wondered about the wording and would ask before purchasing another whip what the internal construction actually consist of. This can be done without giving away trade secrets and if they refuse, then don't buy from them.


Ron
It's ok if you disagree with me.
I can't force you to be right.
Top

I will post some better lit and closer photos later in the day. I’ll get some good close ups.

In retrospect after reading I have to say that I was looking at it with assumption without considering the mitigating factor of personal styles in making a whip. I think scammed was too harsh. As the musical advice goes ‘you better shop around’. And I will.

Just means I have to buy more whips.

As craftsman myself, I though not in anything as intricate and varied as whip making, I think I was jumping the gun here and I must say sorry to you for wasting time to reply to me on this matter.

Need to learn to hold my tongue (or fingers if you like) until I know what I’m taking about.

Feel free to delete any dummy comments I have made.
Top

We don't delete comments here. We learn from eachother and no question is dumb. All is well. When you are ready to shop for the next whip, you have all kinds of help in making an informed decision.
Due to rising costs, dirty deeds are no longer done dirt cheap.
~Management
Top