More Whips of H.Rutherford (Page 3 of 6)

You are welcome, Hayes. The whip is a lot of fun to crack.

I completed this a couple of days ago and it's been working pretty well.  12 p, single belly, 4tt core.  Thong length is 68".  A double strand of lead core line was wrapped in the tt spiral down the 2"0 tt core.  Anchorseal on the core and belly before binding, then hot waxed after the 12p overlay.  Birch handle with aluminum ferrule and Krylon gloss black.  C&C always welcome. 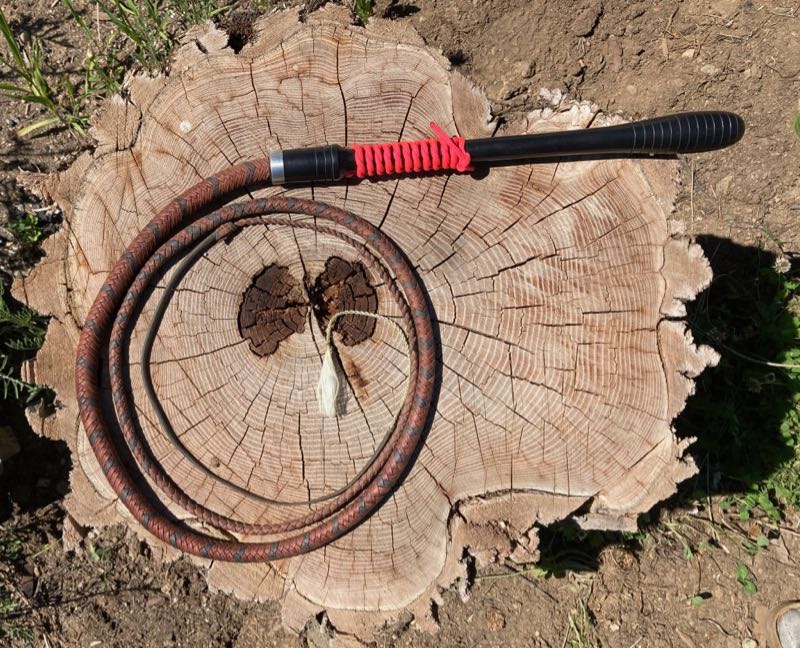 Looks great! I've used the leaded line in the same way and liked how it turned out. What did you think of the waxing? You keep asking for us to critique your whips, but I can't find anything wrong with the one you sent me (it is a sweet little whip) and this one looks to be its equal.

Mark, this one is about 8" longer and I went 24" with the lead core.  The hot wax ends up a bit harder than anchorseal and I got a bit of that weathered look by rolling after it was cooled off.  I brushed anchorseal on both the core and belly before binding thinking the hot wax would not penetrate through.  I would say the bubbles stopped much quicker doing this.

A couple of hours ago I brushed on some walnut colored Briwax then buffed it  with a shoe polish brush.  I'll try to take a picture tomorrow.  Gave it a nice dull glow and feels super.

I'm now the proud owner of a beautiful 8' cow whip by Mark Elliot. His way more experience making whips really shows.  The balance of this trade was way tipped in his favor and I suspect thats just the kind of person he is.  Solid ebony handle with perfect finish, and multiple plaiting patterns with beautiful accents.  There is much I can learn having this in my hands.

My first experience cracking this whip was not pleasant.  I quickly learned how different this is compared to my 4-5' toys.  Then I calmed down and let the whip do its work. A few flicks and I found you almost can't stop it from cracking.  Then came a nice slow overhead crack which can be quite loud and now working on a slow overhead figure 8.  This is going to be a nice alternative to my light whips .  Many thanks Mark, you really do some nice work.

Hayes, very nicely done.
You're going to have some happy customers.

Hayes, an 8-foot cow whip from Mark will be a great addition to your collection!  Mark's workmanship is first class.  And you're quite right: you just need to calm down and let the whip crack itself.  It will do so very happily!

Thank you, Hayes. I disagree, I think I made a great trade. I have been having a blast with the whip and just because it is small does not make it a toy. It would be a very useful tool working cattle or sheep in a pen from horseback or afoot.

The socket hole required was 13/16" so the ferrule had to be a bit larger than my previous builds.  I ended up using a piece of 1" copper coupling but a piece of 1" copper pipe might have been fine and not as large in diameter.  Hot wax and rattle can black satin paint. 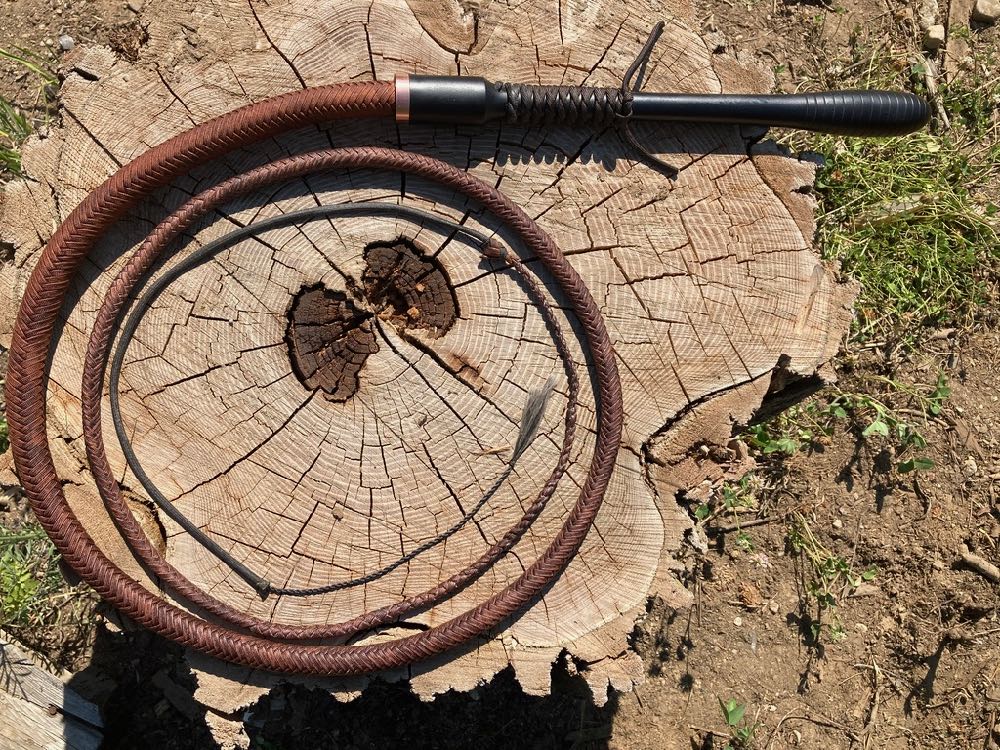 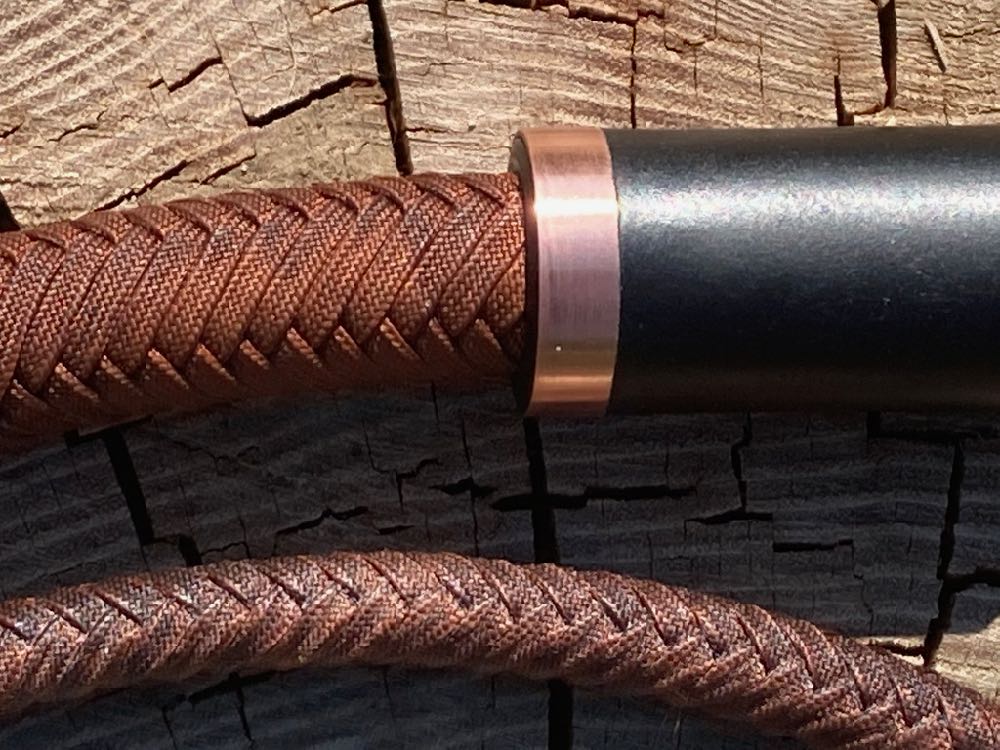 Hayes, your style is rapidly going into the "recognition" stage.
One look and you can tell that this is a "Hayes" whip.
I love the color and the satin finish is spot on.
Be proud.

How does it crack?

Thank you Robert and Ron, it cracks well and adds to the variety of sizes kept.  One thing I'm finding out, going back and forth between whips equates to more practice.  I'll quit cracking, return indoors,  see another whip and can't resist going back out for a few more.

Another Beauty, Hayes. That handle is fantastiic. The plaiting and the taper look great.

Thanks Mark.  Not shown is an early plaiting mistake up by the handle.  Pretty sure a pair of strands crossed and I didn't notice until a couple more drops.

Been there, done that. Still spend a lot of time unplaiting to fix mistakes.

Mark is right.
I remember finding a mistake after completing 4' of overlay.
That was so fun.

I was so tempted to just leave it, but I would always know it was there and it would bother me ..... forever.

I ended up leaving it since it was an experiment and not for sale.  I'm wondering if this type of core with staggered un gutted paracord is more prone to twisting?  After what seemed a long hot wax  submersion for the bubbles to cease, I hung the thong vertically.  It has loosened up considerably and cracks well but appears to have twist that didn't exist when first plaited.  I'm guessing that using this type of core and a single belly is faster, but not as precise as when using two bellies.  ??

Hayes, it might be as you suspect, but it also might be the cord reacting to the hot wax, if that's the way you waxed it.

All paracord are not created equal.
Polyester cord is prone to twisting more than nylon. Mix the two and you are going to see a very negative result.

A single belly whip done tight and consistent over a solid core may not be quite as nice/articulate in movement as a two belly whip, but it can still be very predictable and reliable.

The issue with a less solid core (one that would allow pull) is that it can rotate due to an even slight difference in pull of tension in your plaiting.

By “less solid” I don’t mean “not mechanically sound,” I simply mean “less fixed in place.”
Even tightly bound, strands running a straight length will be more prone to possible rotation around the diameter than say if you’re plaiting around a twisted core.

A straight strand core is not bad, not wrong, just allows a different movement in the thong and less forgiving in unevenness in tension of the plaiting, where paracord is concerned, at least.

My plaiting tends to pull to the right (dominant hand) and I have to watch it on finer work or it will twist or “drift.”

Mistakes:
I have a set of whips (the 10’ and 6’ I’ve been working on forever) that I have re-plaited 3 times.  Found mistakes in them and I must fix.
When my head is not in the right place fancy plait matching from whip to whip is difficult.

This is a beautiful whip.  You should be very proud of it.  You tried something new and maybe the core will be a type that works well for you in just another whip or two.  Maybe you will look at it and try a larger Twisted taper core to plait over.
There is no hard right or wrong, the method you choose that works for you is right for you.  I don’t BB load anything anymore due to the amount of work and the loss of connection in the feel of the whip.  Things change and methods evolve and adapt according to your skills and experiences, tools and techniques.

Very nice looking whip.  Also, I think the longer wax time is likely due to the  openness or spaces between the individual fibers of the core/layers.  Not saying you did not bind or plait  tight, just the nature of fibers laying next to each other as opposed to being plaited or  twisted inside.
It is not a bad way to make the inside, it is another useful set of skill and knowledge , but also will act differently than other cores.
My small .02$

Rachel,  I really appreciate your thoughts on this.  You have truly been there ,done that, so your advice helps in the learning pocess.

Hard to say what I will want to make next.  I'm trying to get other things done but then walk past the bench and think I'll just make a core....