Wolfgang, I'm sure there is a way not to have euros automatically converted to dollars by PayPal - but I can't advise you.

They do? Interesting. I have no idea why PayPal does what, when and why. But at the moment it still is the best way for us to do these things.

Aaaand - are there more folks who have to tell us something? Cointributions for the lottery? Thoughts, ideas?

September is coming. And then we'll have another serious evening without fun and strict rules

I think Paypal  takes a fee both ways. Therefore we should have a Paypal Account in EU, so the only fee will be from countries outside EU.

September ..... another serious evening where I have to do violence against my nature and avoid following the chessboard pattern on the floor, when I walk around

Robby, I will be participating both buying tickets and donating a whip, though you may not see any activity on that from nme until I test at school on August 1 and 10.

Here is my contribution to the 2019 Dog Shelter campaign:

This is a 5 foot nylon stockwhip by Einar Stephenson, which I bought on eBay in 2015 for $100.  It's forest green & desert tan, with one plaited belly, a 16-plait overlay and an 18 inch fibreglass handle.  The handle is also 16-plait, with a grapevine keeper knot.  It has Einar's characteristic egg-shaped heel knot, which is very comfortable to hold.

Einar wrote at the time: 'This whip is designed with a very fast action and weighs in at 430 grams. It will serve well for fast routines and is balanced to crack easily. The material used to construct the whip is type II 650 nylon Paracord.'

When Robby came to visit me (was it that year, or the next?) he tried this whip and pronounced it 'very good', adding, 'Don't get rid of this one!'  But, as I've said, I haven't actually used it for at least two years, and during that time have acquired several more whips, at least one of which is very like this one - so this one will go to the dogs! 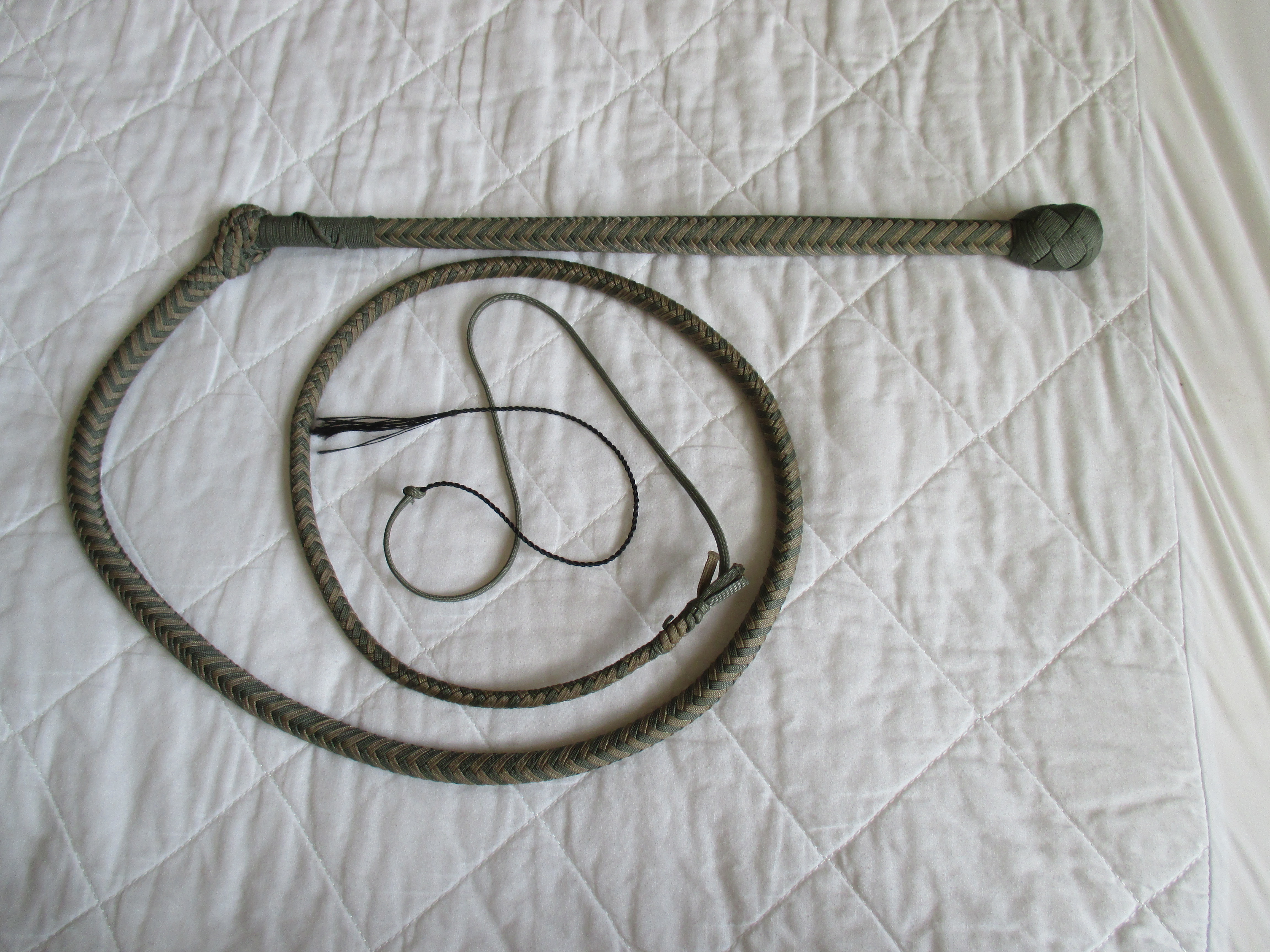 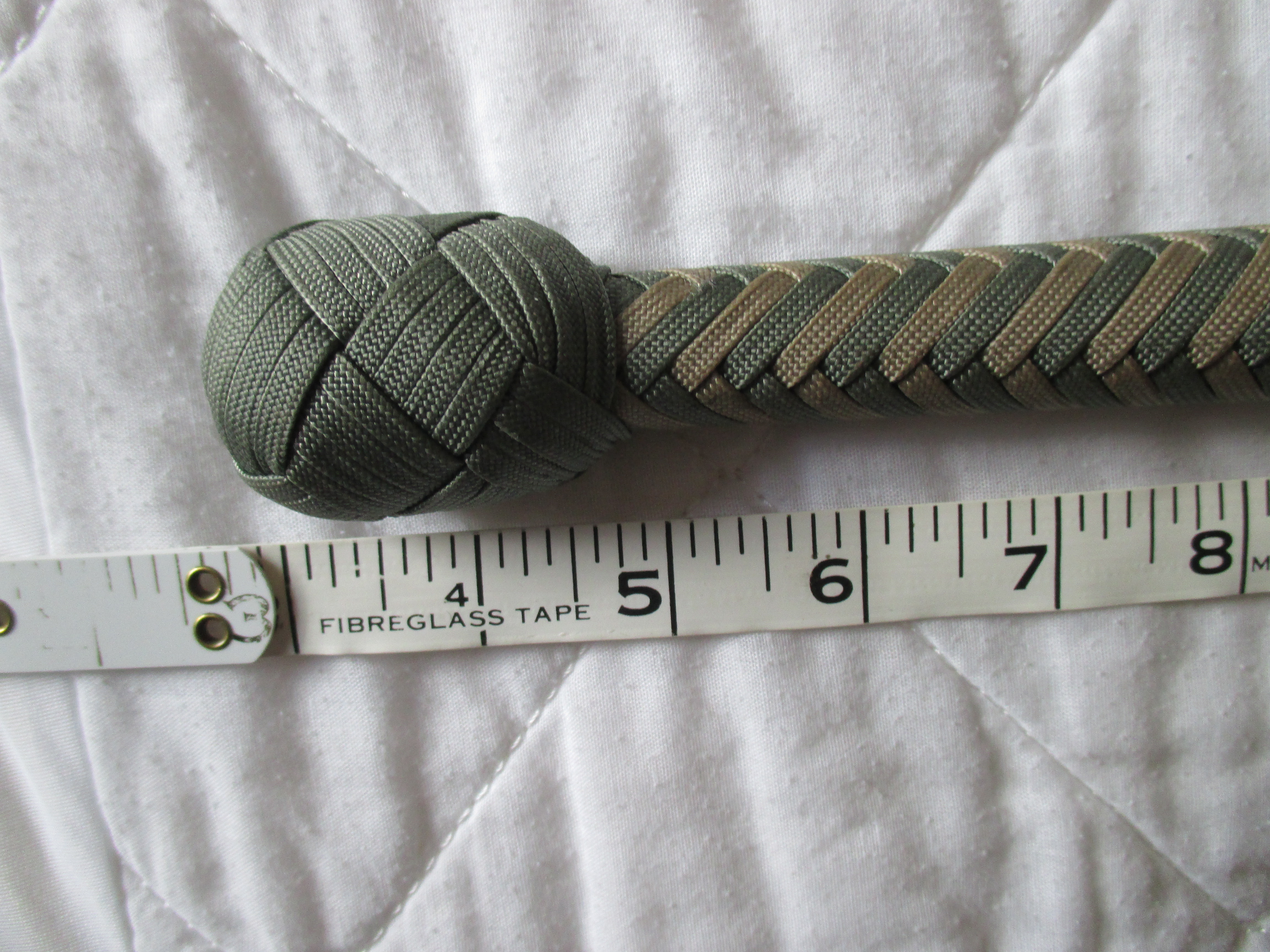 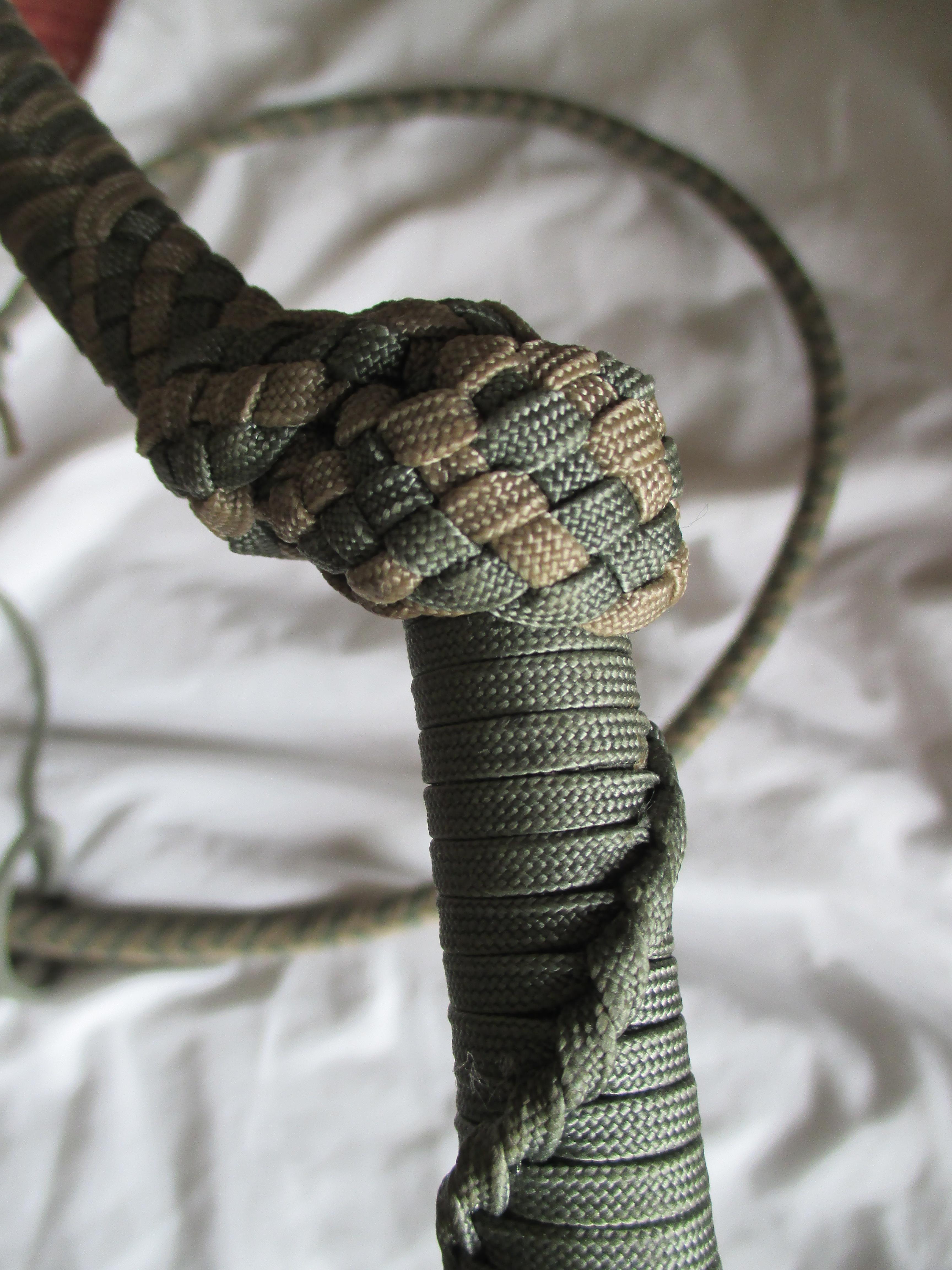 And why does Payapal take a fee of 2.50 euro even though Family&Friends was the default setting?!? I still sent the amount that I wanted but Paypal put the fee on top of it. Seems to make no difference if I choose the amount in euros because it’s still converted into dollars and for that they charge a fee.

Wolfgang, I think I can now answer your question.  I just tried to buy some tickets, and PayPal showed a fee for me as well.  I think it's because Jessie set up this account, and her own Paypal account is in US dollars.  PayPal therefore wants a conversion fee, even though I tried to send GB pounds turned into Euros.  If Jessie had set this up in Euros to start with, there might not be a fee; but perhaps, because she's in America, PayPal automatically charges a conversion rate. It's very small, but still....

May I just check that the Dog Shelter address for PayPal is correct?  I have whipbasicsdogshelter@gmail.com.

As soon as this address is confirmed, I'll buy some tickets!

Robert, it’s the same adress as mentioned on the first side of this thread, I don’t see anything wrong with it and Paypal will recognize it, because it was used last year! This means as soon as you copy and paste it , Paypal replaces it with „Jessie Edwards“ because it’s an already verified PP-account. At least it happened when I did it yesterday. The conversion fee than seems to be something we Europeans just have to accept...setting up two accounts as suggested by Flemming would be the only solution.
Beautiful whip, Robert! Probably the kind of thing that will work well with continuous overhead volleys.

Thanks, Wolfgang!  Yes, I think we just have to accept this as one of the 'costs of life'....

Jessie has confirmed that this PayPal address given at the beginning of this thread is correct.  I've just bought some raffle tickets.

I received the donation from both Robert and Wolfgang.

PLEASE donate in Euro.  If I have to convert from dollars to euro on the final submission, there is a charge.

I just transferred some money. I did select Euros, so I hope you receive my donation in Euros Jessie.

Thank you Sven, I got your donation and Mark's.  The puppies appreciate!!!

Robby, I will be participating both buying tickets and donating a whip, though you may not see any activity on that from nme until I test at school on August 1 and 10.

Anytime WS.  I too am donating, but I have a lot of work to do in between.  We have 2 months to get done.  It's all good.

I've just seen this on the BBC website.  Go, Dogs - wherever you are!

Robert, thanks for the share. Dogs are amazing and we don't deserve them. My girlfriend was on a week vacation this past week and just came home yesterday, so I've been dog sitting and got some quality alone time with him. My girlfriend swears sometimes I'm just dating her for the dog

I just bought tickets, friends and family in euros, and  there was no fee- I used my regular bank account, it showed options for two of my credit accounts that are linked to my paypal, those would have had fees, so that might have something to do with why some of us get fees and some don't.

Tyler, I think it's more likely that I paid a (very small) fee because I'm in the UK and Jessie is in America.  As you are also in America....

This is probably the reason, Robert...
A company like paypal will do most stuff by local subsidiaries I think.

That makes sense... kind of

Just to remind you all that dogs can be very important - even vitally important - to humans, have a look at this: