Starting up a build thread here. I'll be starting off with my current whip build. This will be whip number 5 for me. I think I'll call it "The Green Machine"

Starting with the core, I used a 12 inch nail as a handle foundation. The core is shot loaded with 6mm chrome ball bearings loaded into 650 paracord which is then loaded into 3/8" sinker cord. The sinker cord overlaps the nail by about 5 inches. I used hockey tape to give the artificial sinew a more grippy surface. I bound this transition very tightly with a lot of sinew to make the transition as rigid as possible. I did bind the rest of the sinker cord to make it more round after I took this photo. 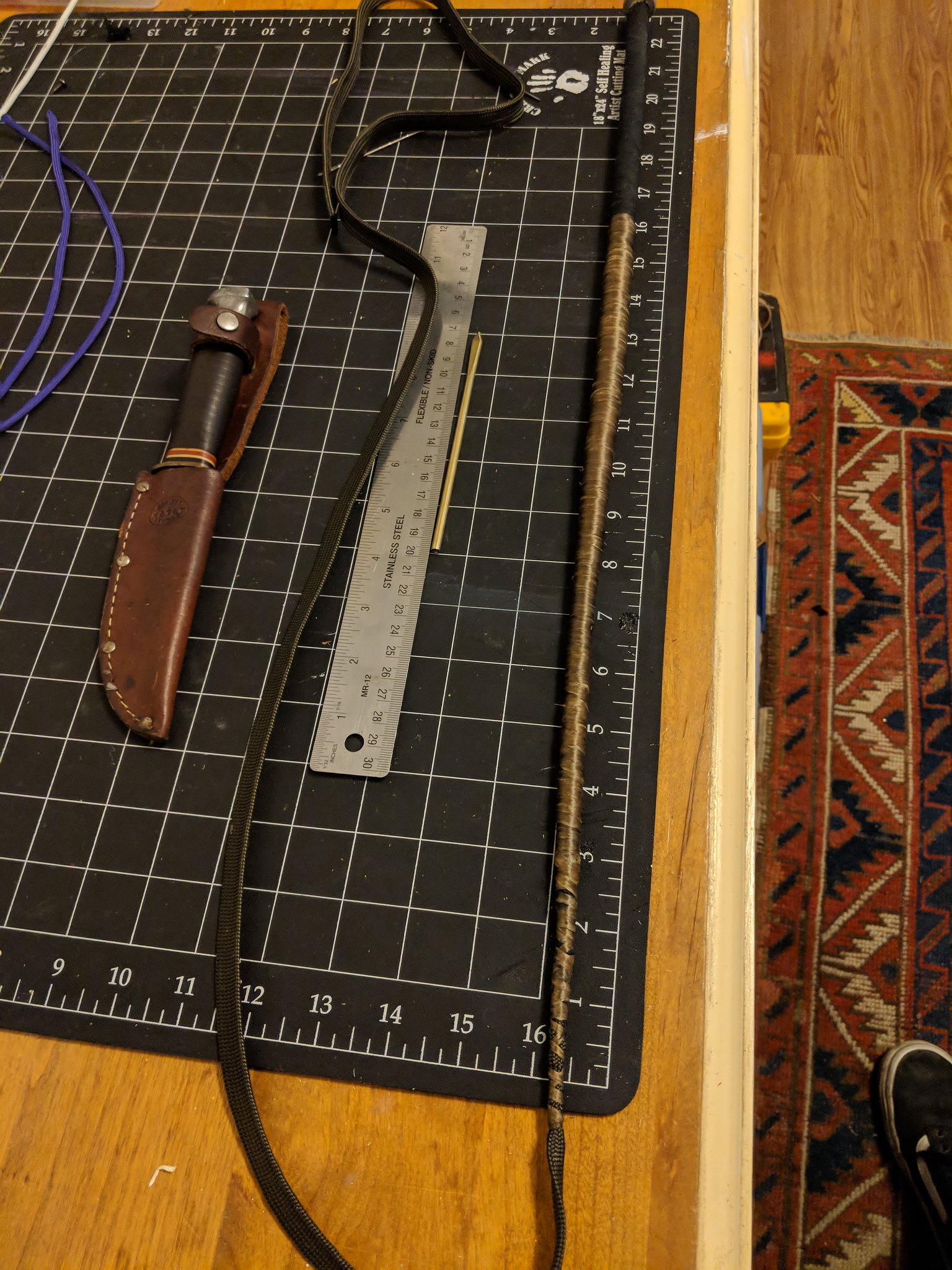 Here is it is with the first belly on and all bound up. The first belly was done in 8 plait and does not run the length of the core. 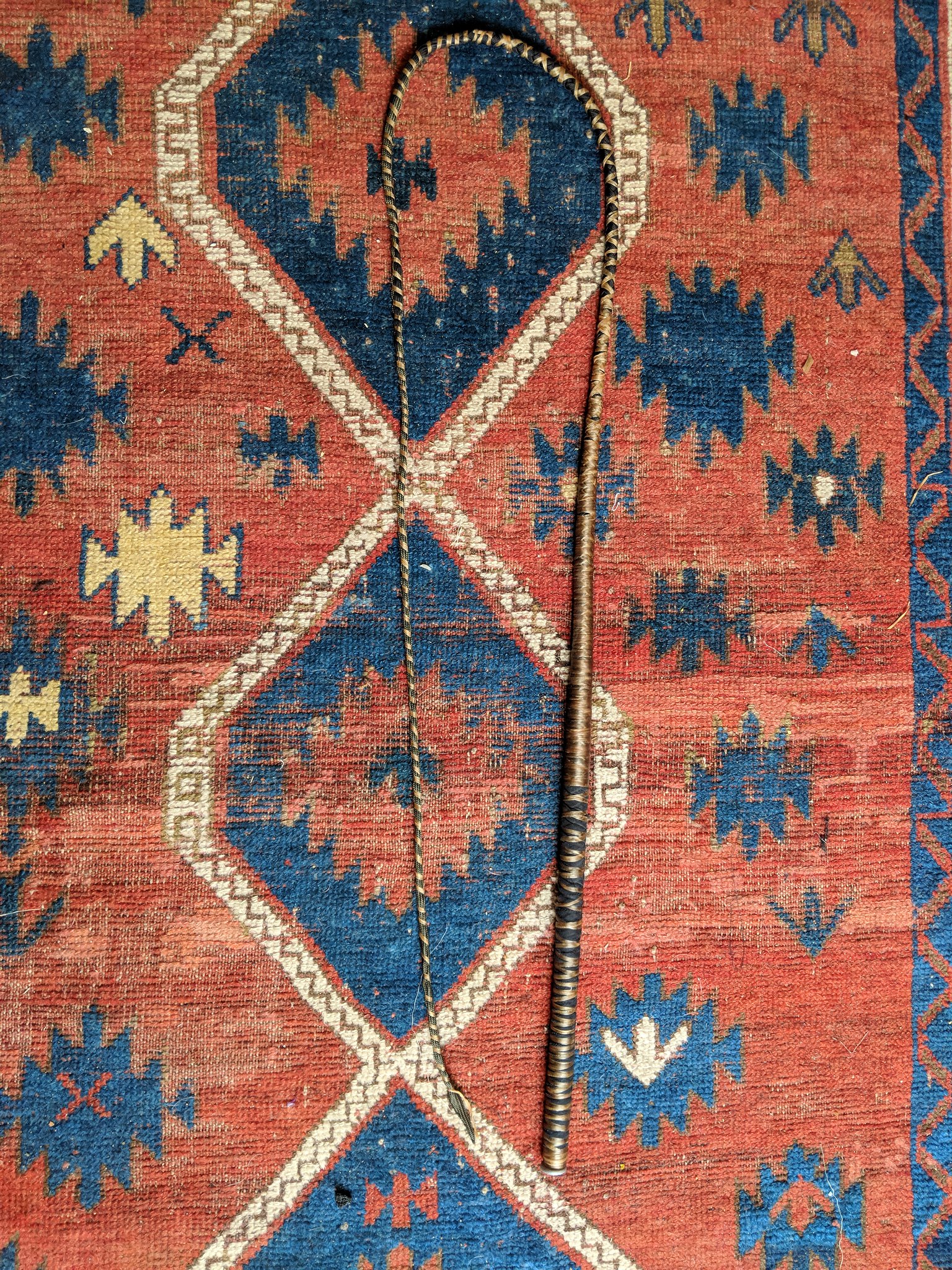 Square start to the 2nd belly. 14 plait. My first time doing a twisted transition. I forgot to get a good photo of that bit. 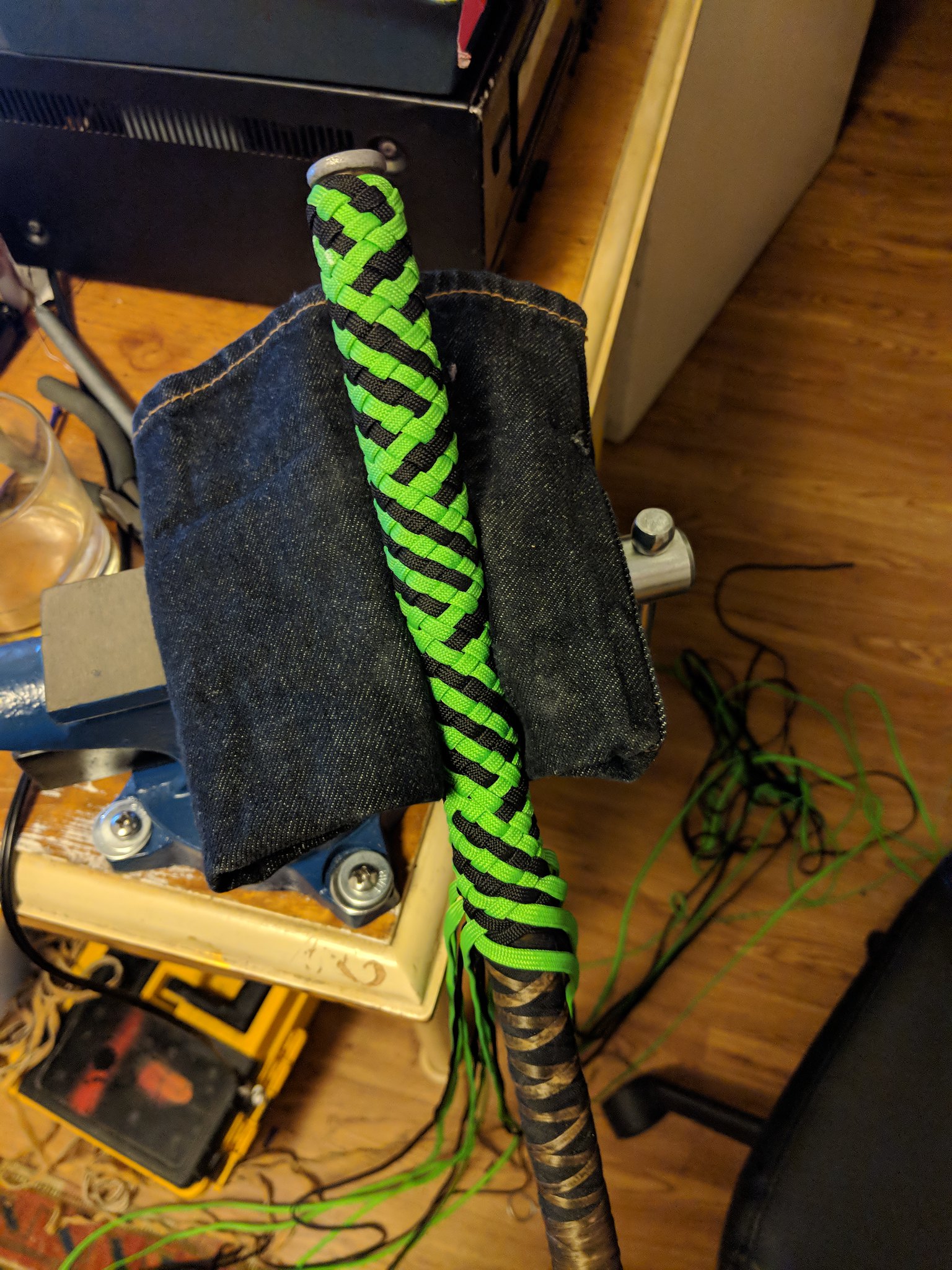 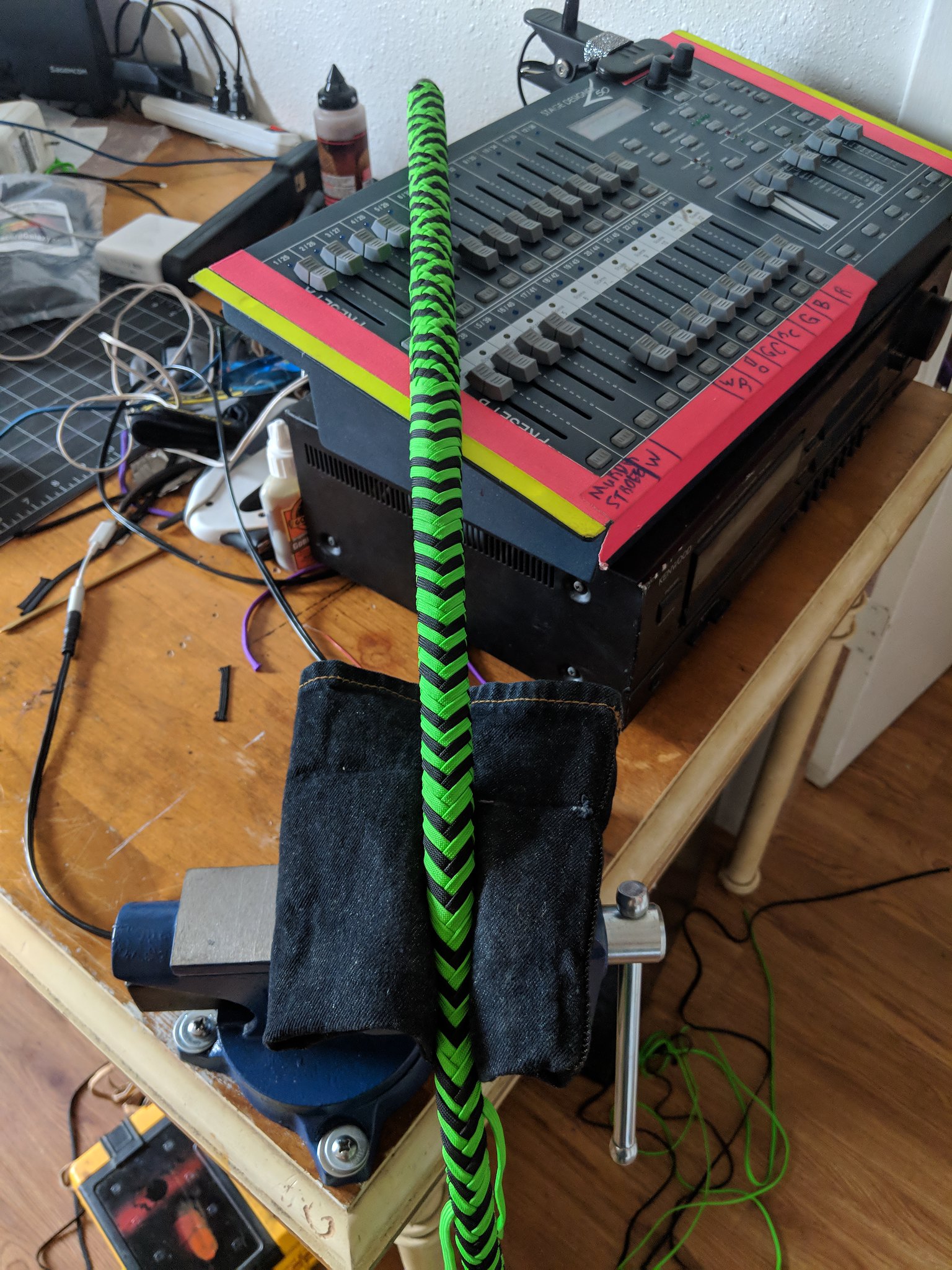 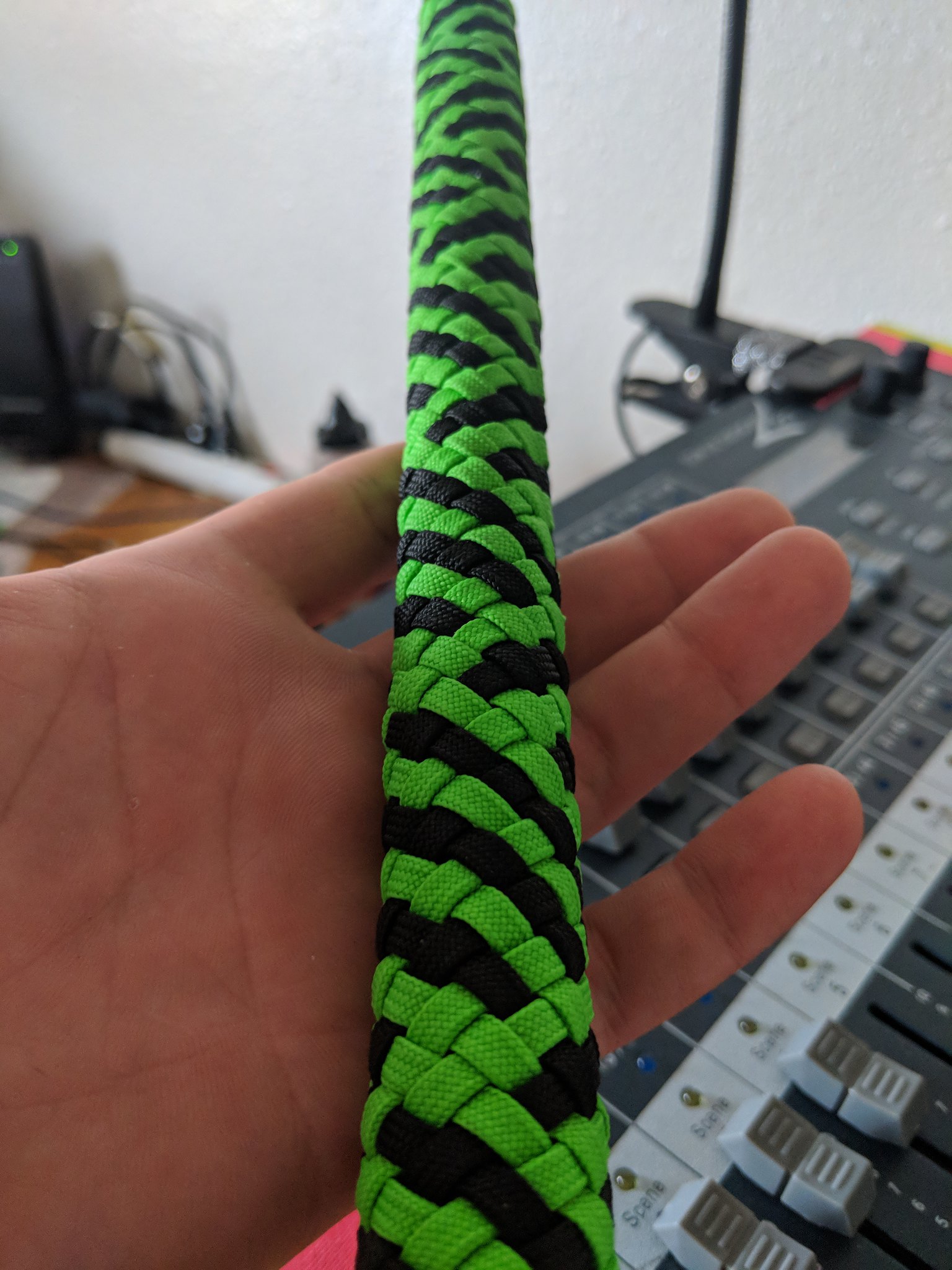 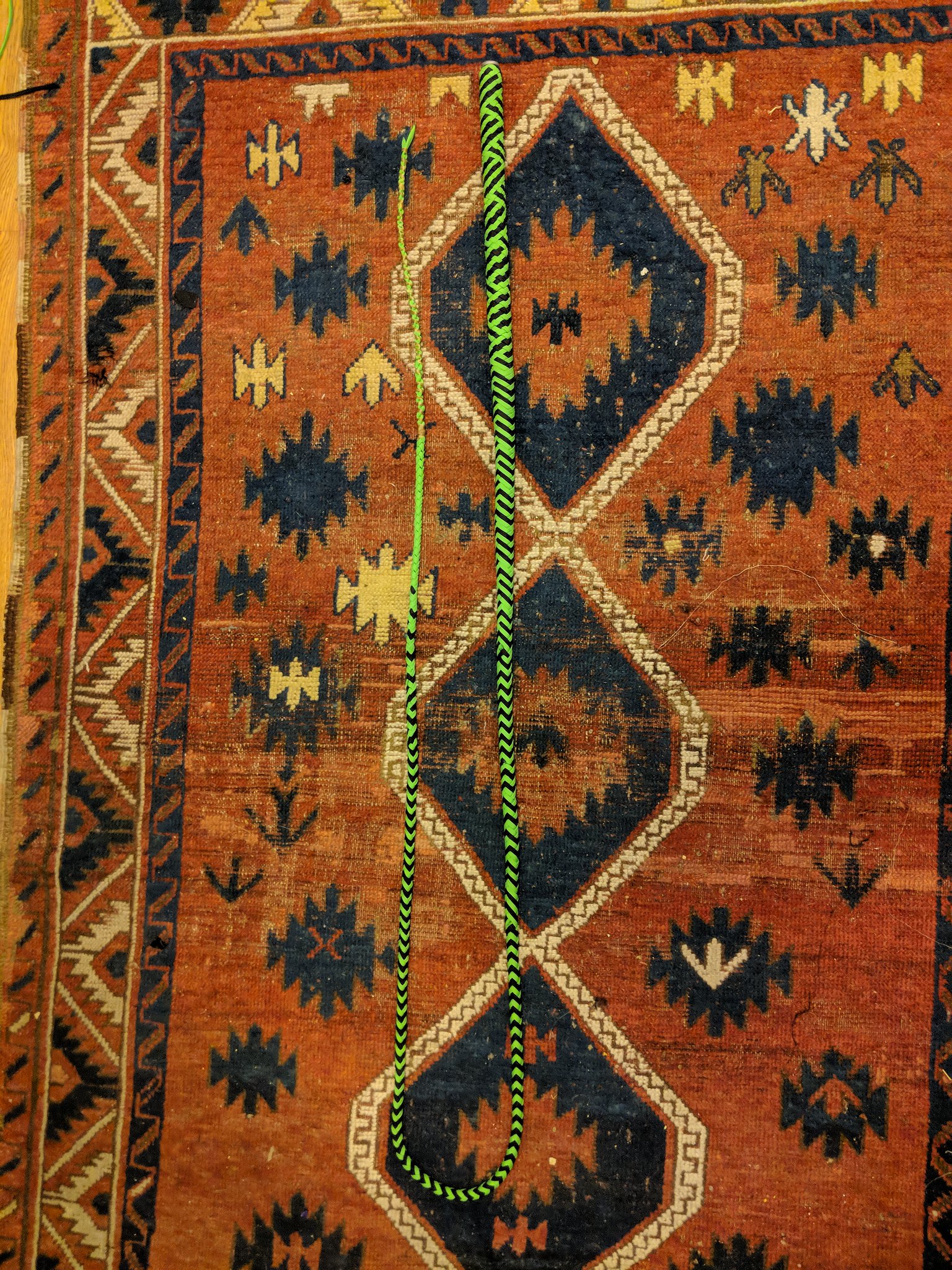 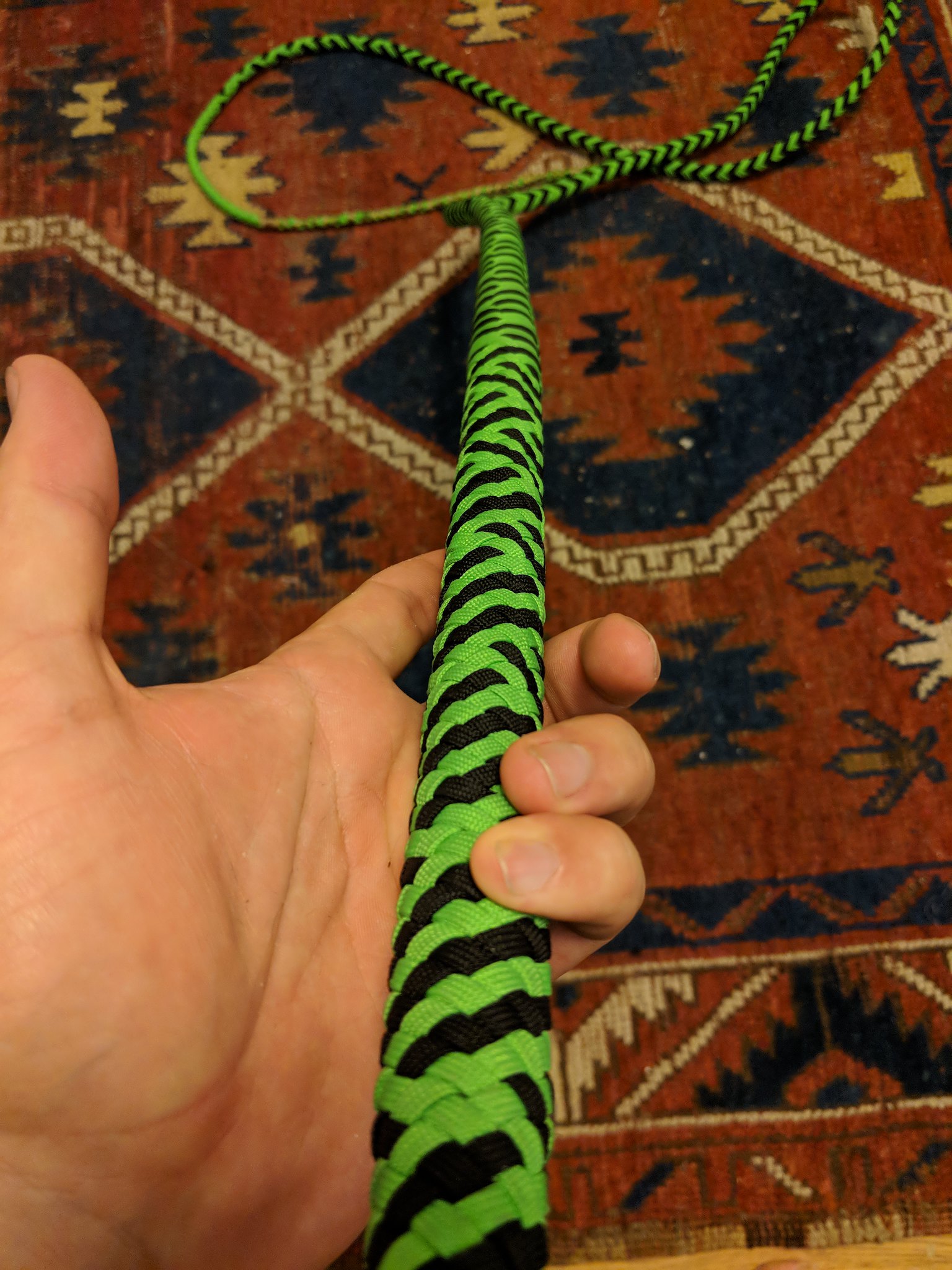 So here's the overlay which is not complete. I may backtrack a bit as I want to get my patterning right down the thong. Quare start, 20 plait braid. I originally took the first photo to show someone what all is involved in a 20 plait braid haha. 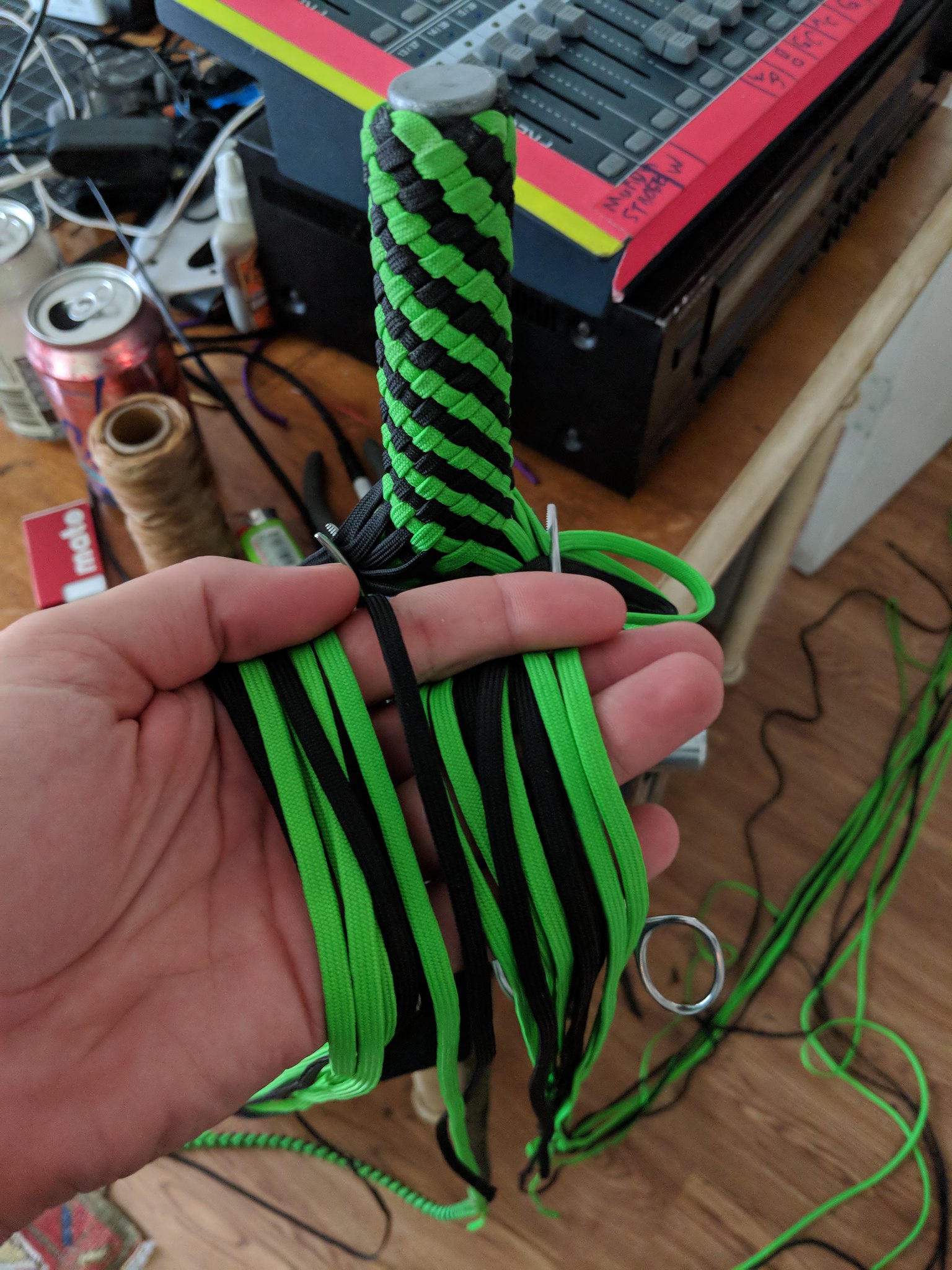 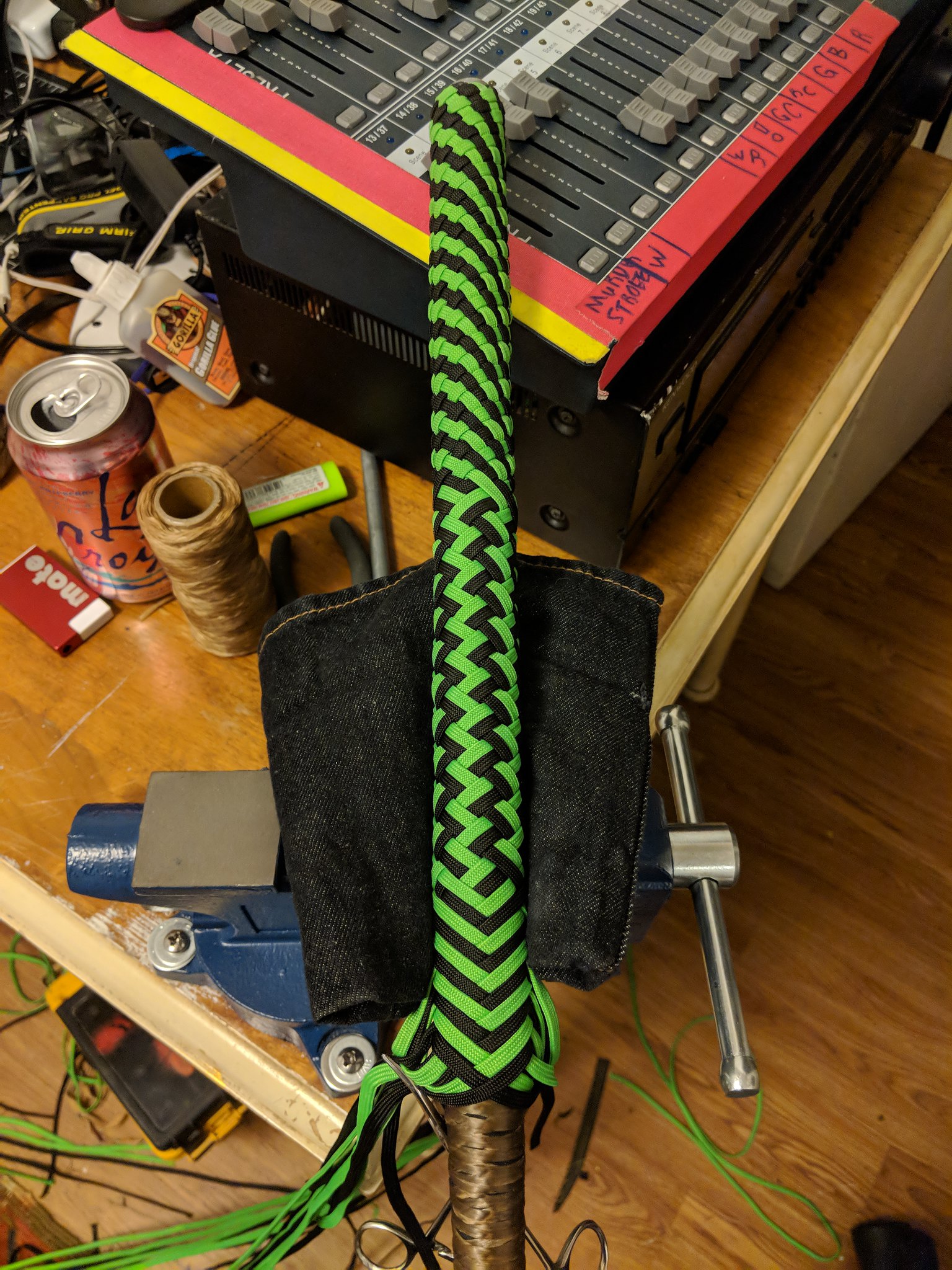 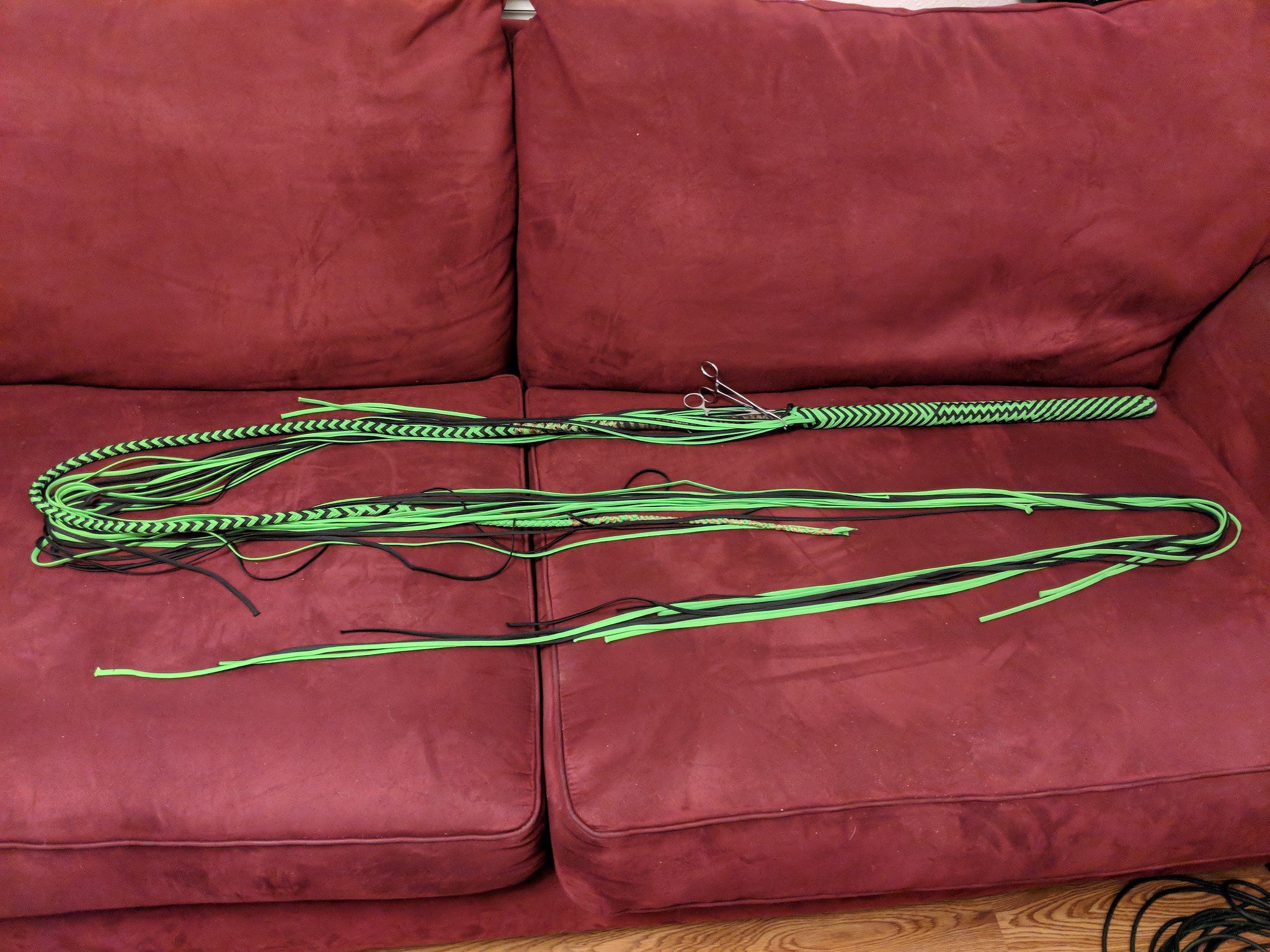 And that's as far as I've gotten. I'm really excited for this one. I can already tell it's going to perform much better than any whip I've made so far.

Let me know what y'all think!

Wow, Alex! that is a really nice start. The taper looks good on the core the belly as does the binding. I have to admit that when I saw the belly and the pattern you did on the handle with the diamond plait I was really impressed. I have never seen that barber pole pattern zig-zag like that to make the larger squares. I was a little sd that you covered it up, although the handle plaiting on the overlay is really nice as well.  Very nice work, sir.

Mark, I was a little bummed to cover it as well. It comes from having an odd number of strands making up the 14 plait. Thanks!

A very good start, Alexis! (And quite a nice carpet as well!)

Not bad at all. You sure figured out the square start quickly!

Progress! the overlay is finished. All it needs is the heel and handle knots, and a little trim up of the ends coming from the fall hitch. 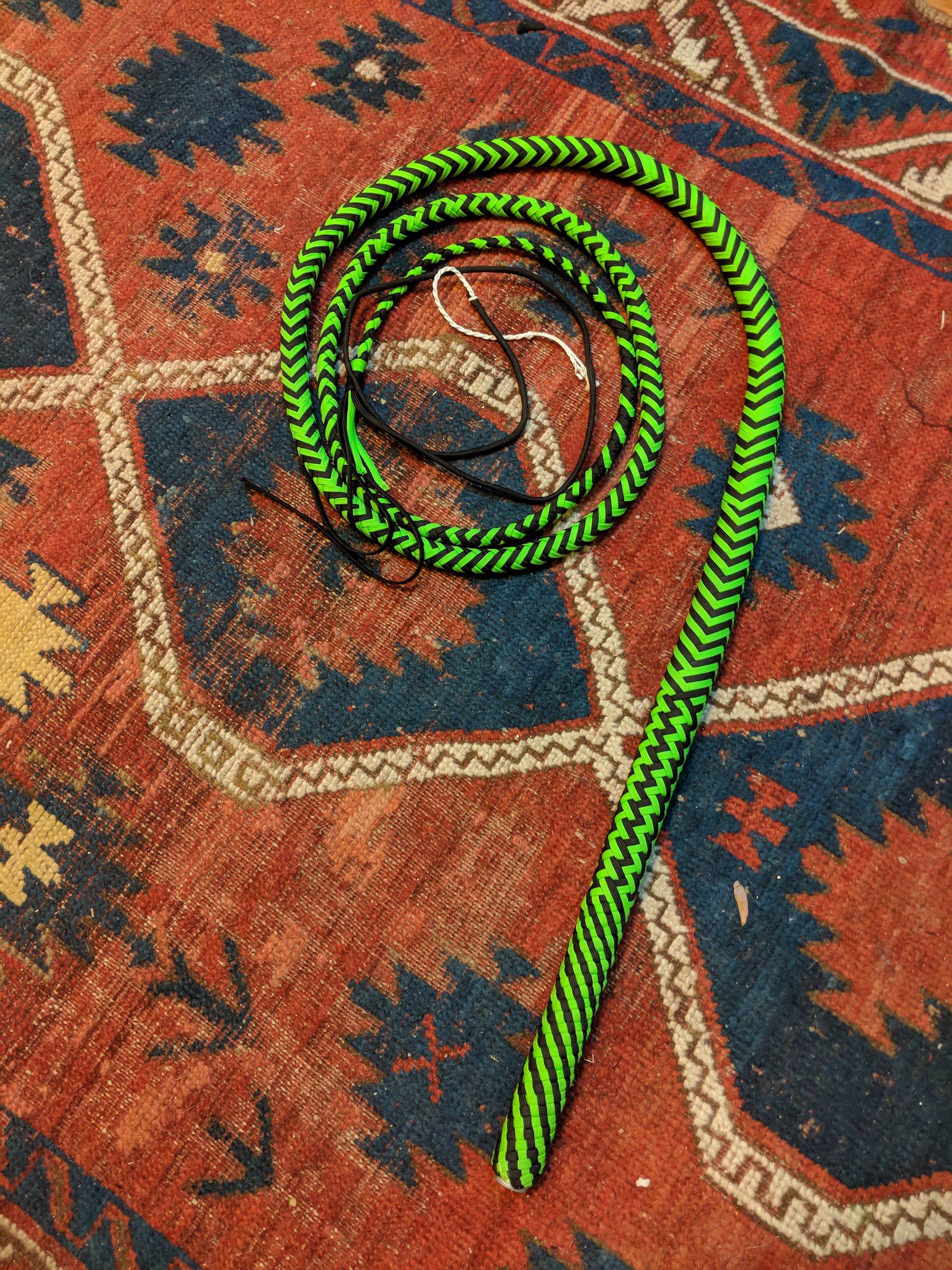 That looks pretty good.
I can't look at it for too long though.

Procrastination is totally a good thing. You always have something to do tomorrow, plus you have nothing to do today.

Nice work, Alexis, The transitions look good. The pattern when you start dropping strands has a bit of an optical illusion type effect, especially with those bright colors. I like it.

Have you tryed it yet?

Not truly. I finished it around midnight and my neighbors wouldn't appreciate me cracking whips in the middle of the night... So I walked a few blocks away and only cracked it one or twice.
It feels a little weird atm. I think not trimming the fall hitch affected it and I have a feeling the fall is a little long. The whip is just over 8 feet from the end of the handle to the end of the thong. 12 inch handle and 33 inch fall. if anyone has advice on the length of that it's more than welcome.

That looks like a good step up in whipmaking. Very well done.

Alex, not having the knots on will make it feel odd. The fall is a matter of preference and it seems to me that each whip needs a something different. 33 inches is a little long, but not excessive. I use weighted falls a lot and twisted tapered falls a lot, and Rachel has suggested weighting my TT falls. If you use an English Eye for the fall hitch and a double ended fall it is really easy to change out falls to find one that works for the whip. Tyler has a video on making weighted double-ended falls here. https://youtu.be/KMeHI1ct6k4

Very interesting! Not my style at all.

Your plaiting looks pretty good. You might want to work on keeping the seams as straight as possible on future whips, but other than that you are doing great. Looking forward to seeing how it looks with the knots on.

Finally got around to tying the knots on this whip. I tied a simple turks head knot for the transition with black and green, and another as an accent halfway down the handle with no foundation to keep it nice and flat. I think this heel know shows improvement over my last one. 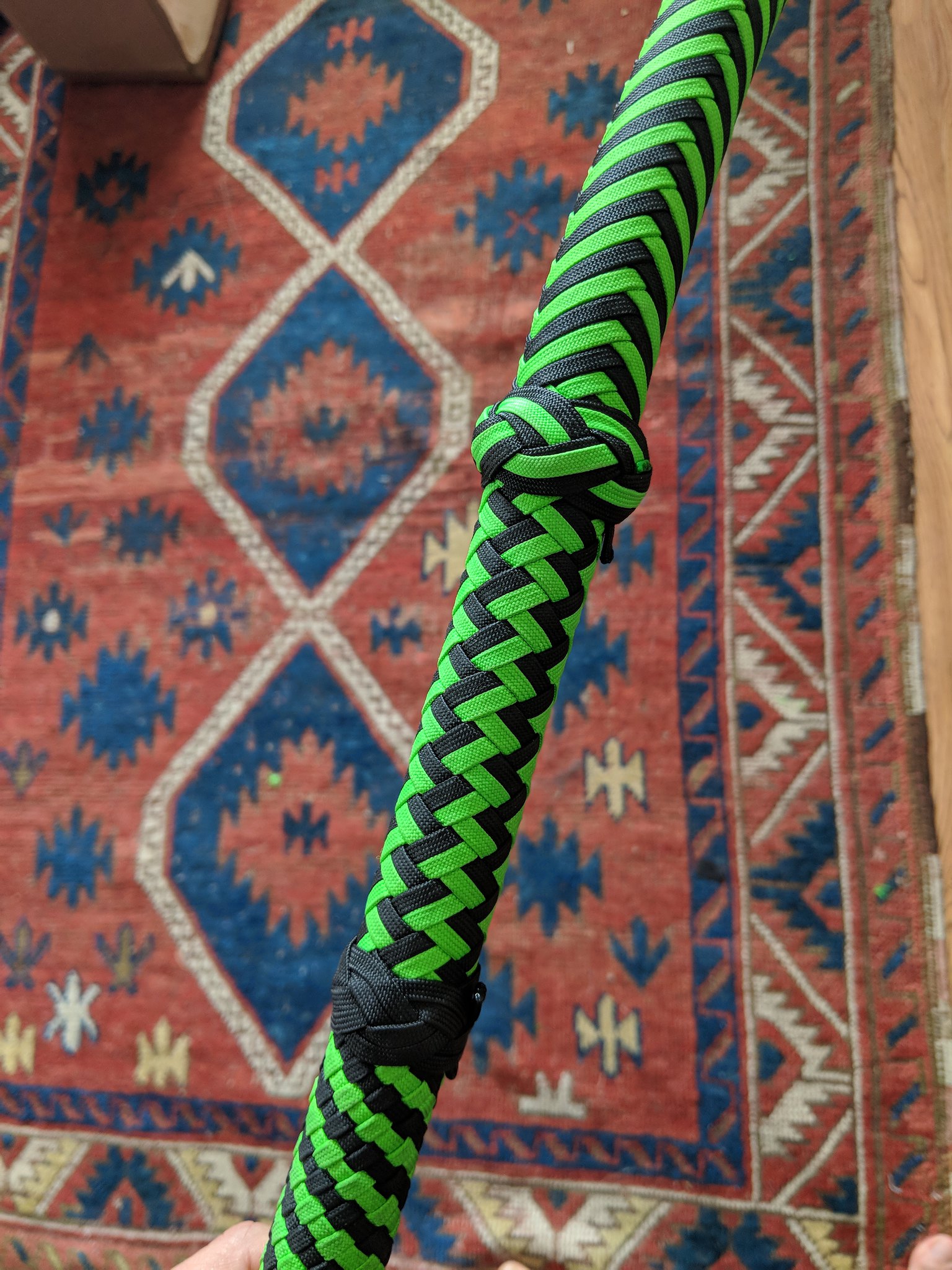 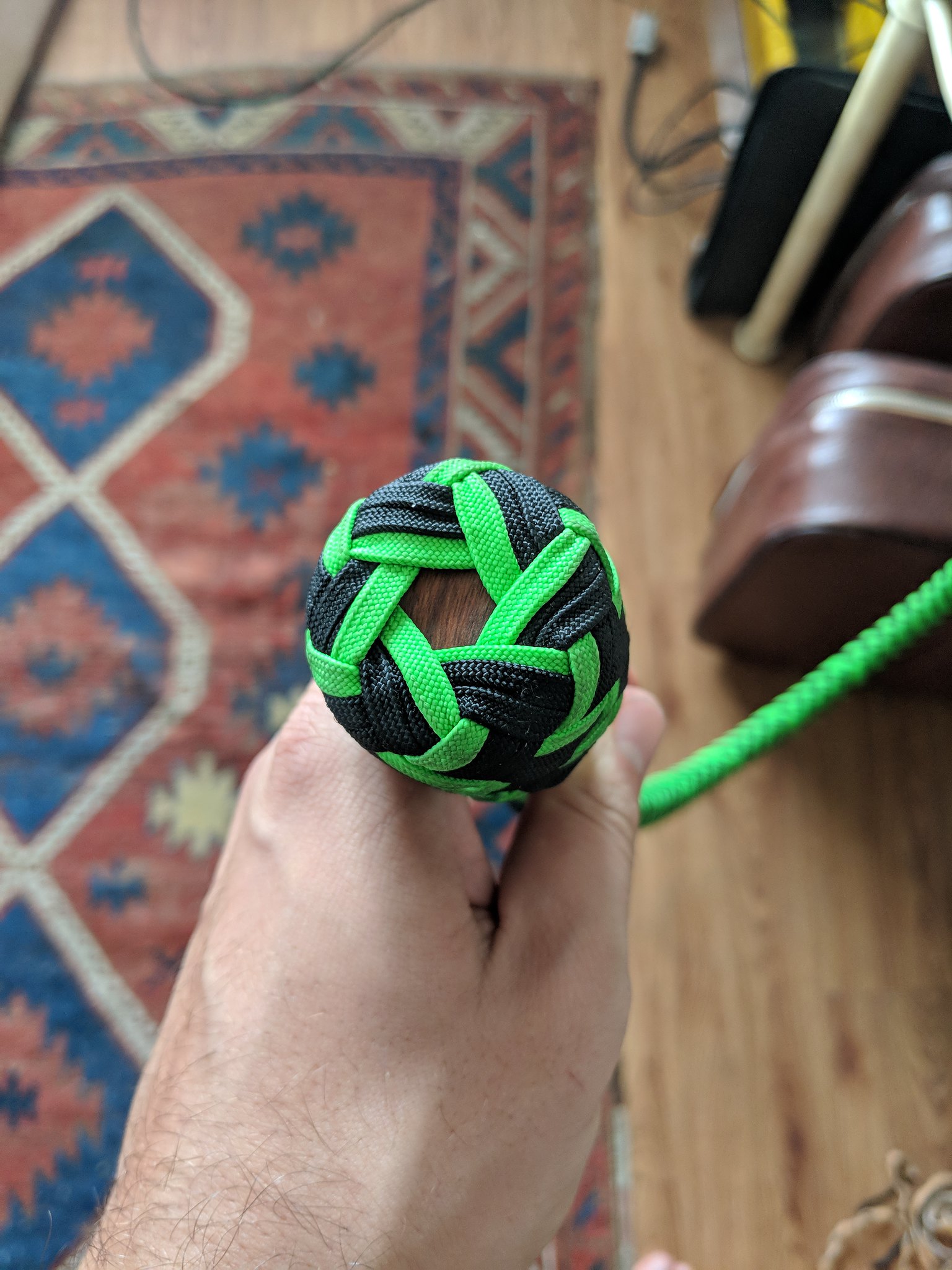 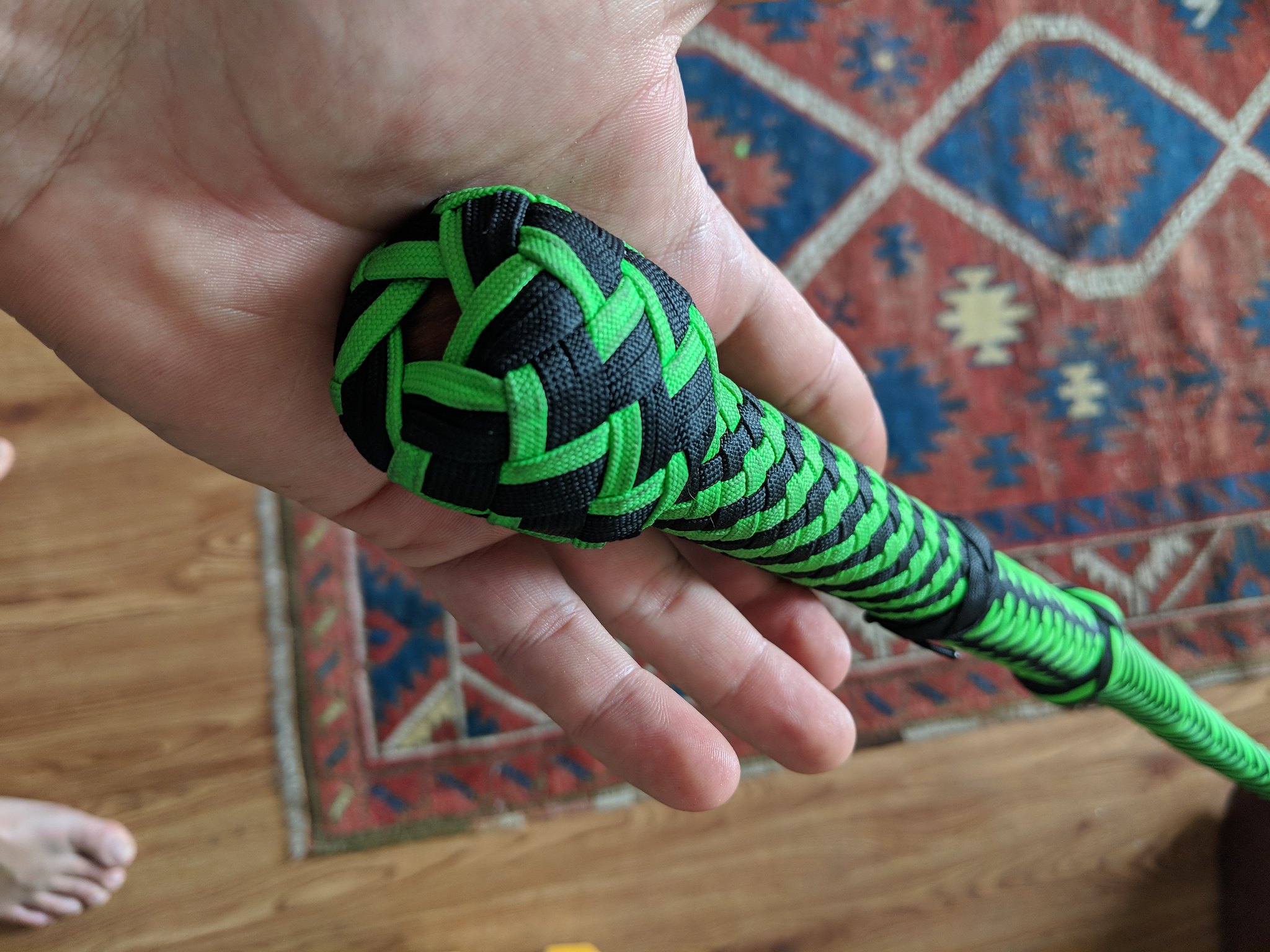 I also got some practice cracking it and it cracks pretty easily and is super loud if you put some extra oomph behind it.

That is an improvement.
The foundation might need to be just a smidgen bigger, but not very much at all.
It's looking good.

Procrastination is totally a good thing. You always have something to do tomorrow, plus you have nothing to do today.