Ok, so here are pics and impessions of Ethan's whip: 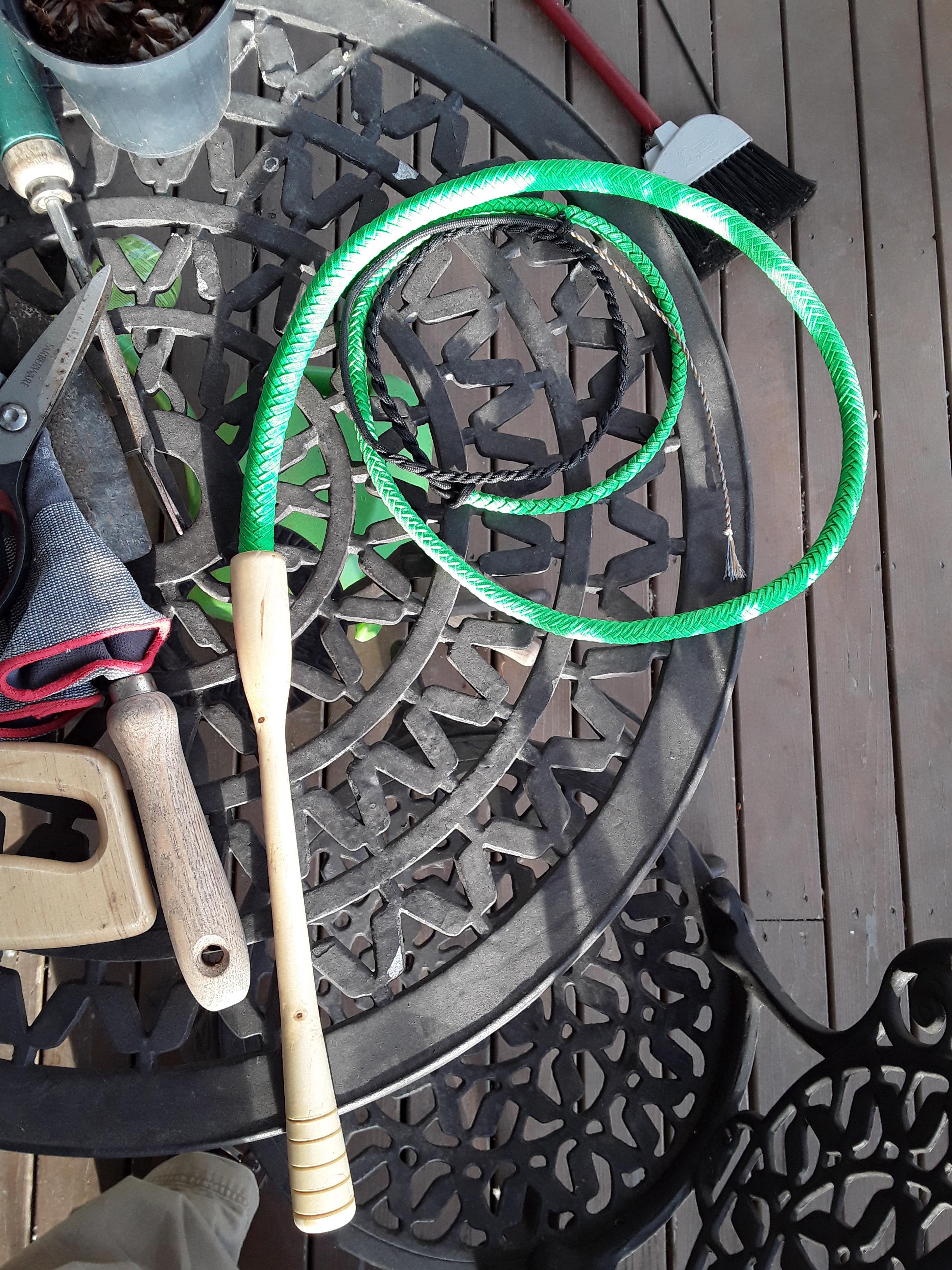 It has really nice taper and balance.  I haven't put it through it's paces yet, but I brought it with me today, hopefully I can swing by the park later.  Don't tell Kiley, but it does crack very well indoors

There is a very slight twist in the seams, and I can see a few little gaps where it goes from 6 to 4 plait.  This doesn't effect the handling, it rolls out quite smoothly.  Ethan, those two things will come with a little more practice- my main constructive criticisism is that the handle appears to have warped a little: 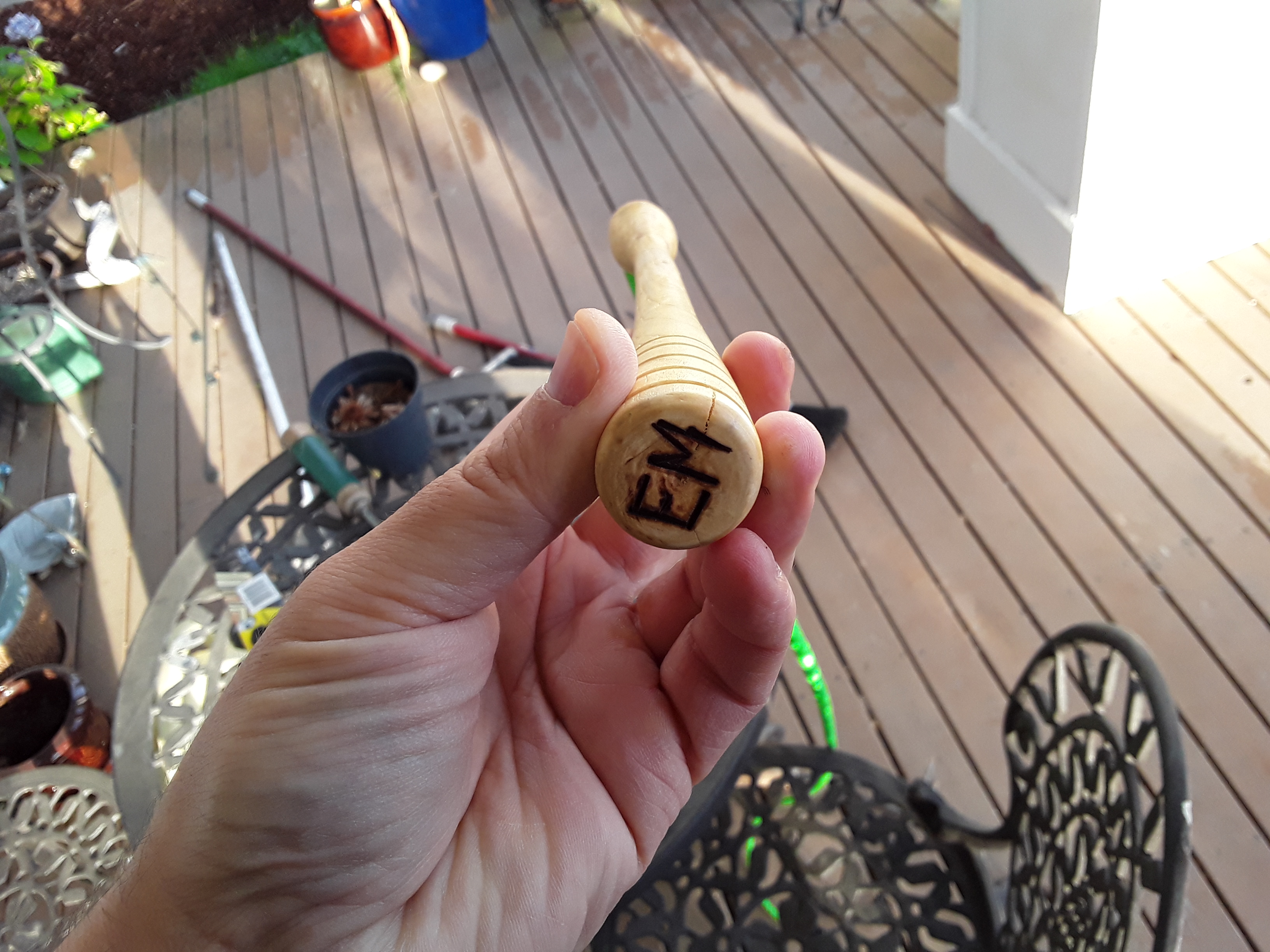 I don't know anything about turning, but I encourage you to consult with one of our wood handle makers here on that.  I think you may have used pine, and if I'm not mistaken hardwoods would be more stabile.

That's not to say I don't like it-  I like it quite a bit and I plan on having lots of fun cracking it!   I love the twisted taper fall you put on it, but I will try the others too, which will be easy because you used m favorite hitch, the English Eye 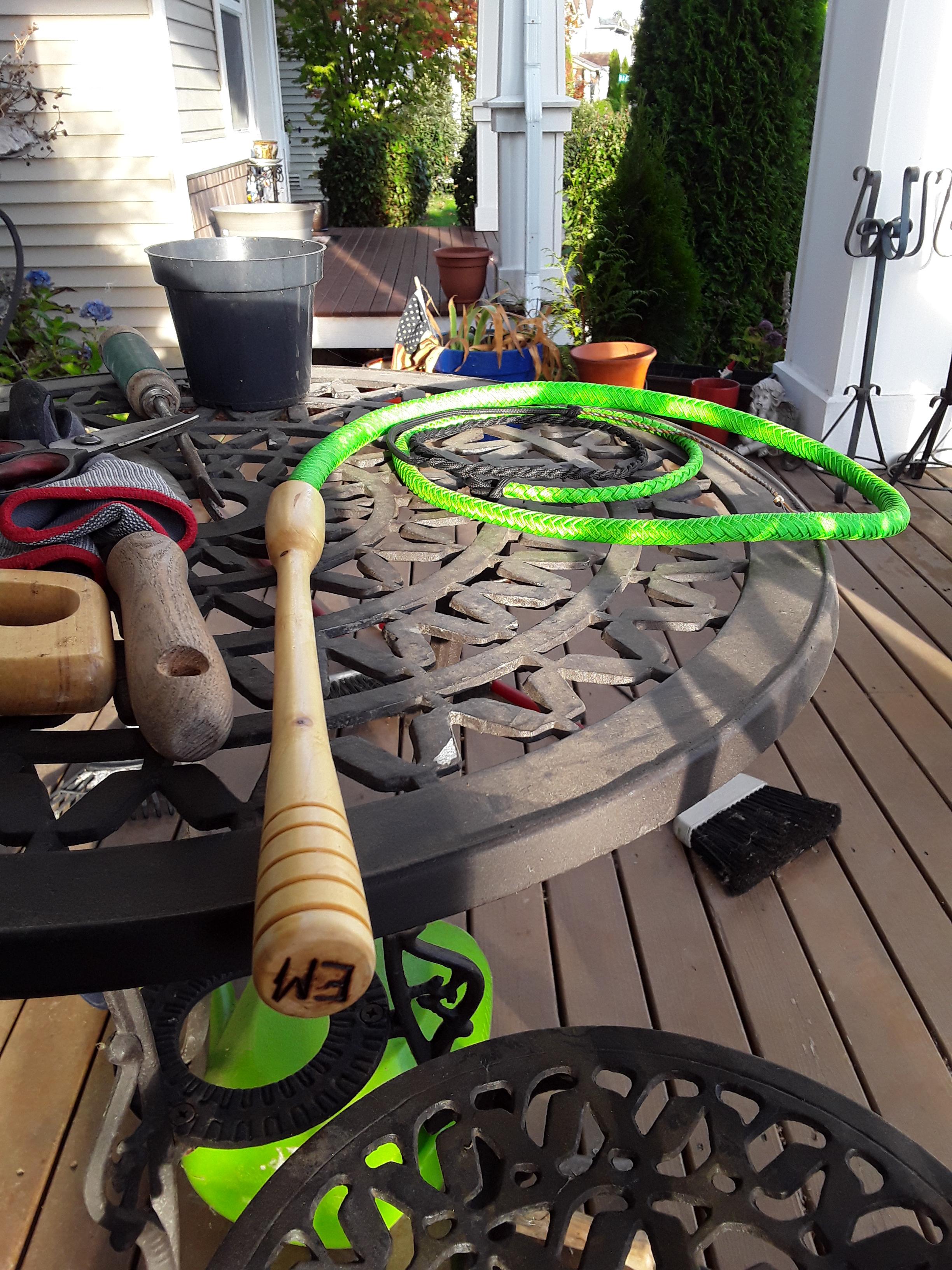 Thank you Tyler for sharing.

I received Roy's whip yesterday and will take some pics soon when I have the time.

But I can say already that its a nice whip, thank you Roy.

Ethan, the whip looks very nice. Be sure that the wood you use has dried before you turn it. I buy a lot of my blanks from Bell Forest and they will say whether or not the blank has been dried or is still green. The blanks I have gotten from Roy have been very dry as well. You can get a little handheld hydrometer for about 20 bucks that will help determine how dry the wood is
https://www.homedepot.com/p/General-Too … wAod_tgOaQ
You have to let the green ones set for a while, maybe a few months or even up to a year, depending on how big the blanks are and how humid and hot it is where you store them. That should cure your warping troubles.

Hey! Let's be careful out there."

And: don't store the more expensive or touchy woods outside if your shop is not climate controlled.  Some woods are very sturdy wherever you put them (except for direct sun...) While others will warp and check while you watch if you whisper the word "moisture"...
I keep mine in my bedroom.

Thanks for the constructive critisizem Tyler! Actually I used a piece of apple from when my dad and I trimmed up the two trees we have in the yard, guess I should have let it dry longer before using it. I am still working on my woodworking techniques, that is only the third handle I have ever turned so far, but I will keep that in mind. And as far as the slightly twisted seams, I've made two thongs since that are even straighter. My goal is for my seams to look like Ben's or even better, if that is possible.

I plan on building all of my whips with an english eye. Even my cowwhips, though I still need to work out how to manage that.
Hope you enjoy it!
Thanks for the tip Mark! I'll look into that meter.

Good idea Rachel. I've been keeping my blanks in the garage. And I live in northern KY near the Ohio river which means it can get extremely humid at times.

A promise is a promise and by the way, it's fun to do.

So I received Roy's whip and was really excited, this is the second whip I'm handling that I didn't make myself (actually the fourth, but those two don't count, they were bad).
So I would be having a second reference I could touch, handle and study to understand whips more.
Especially since this whip was made by the awesome Keanu Shimaoka.

I also watched Robby's review on this particular model, and I got even more excited.
https://youtu.be/uEH9ccuGydE

Then I received it 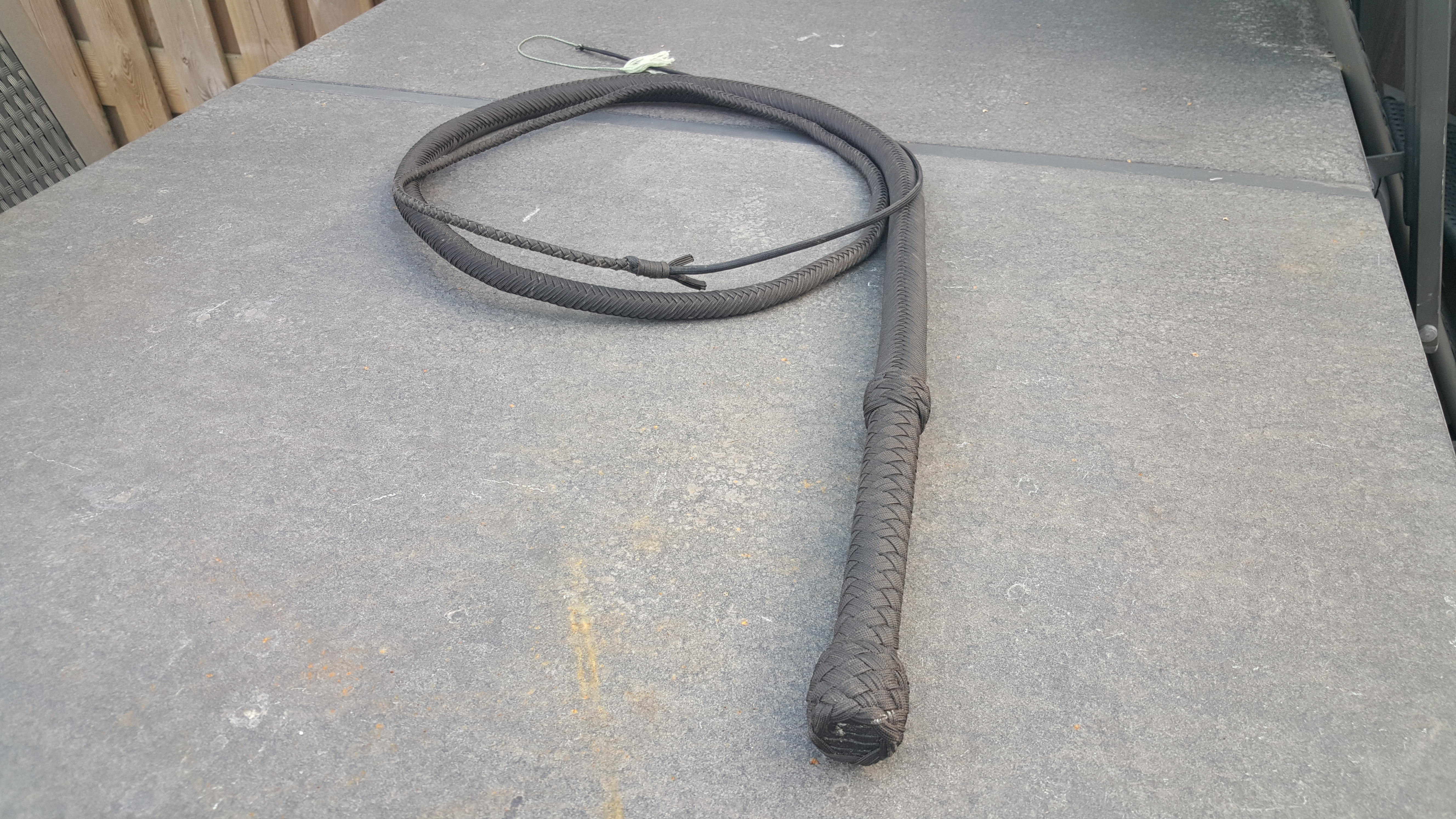 It's a used whip and I knew this, but it still looked awesome and very well made. 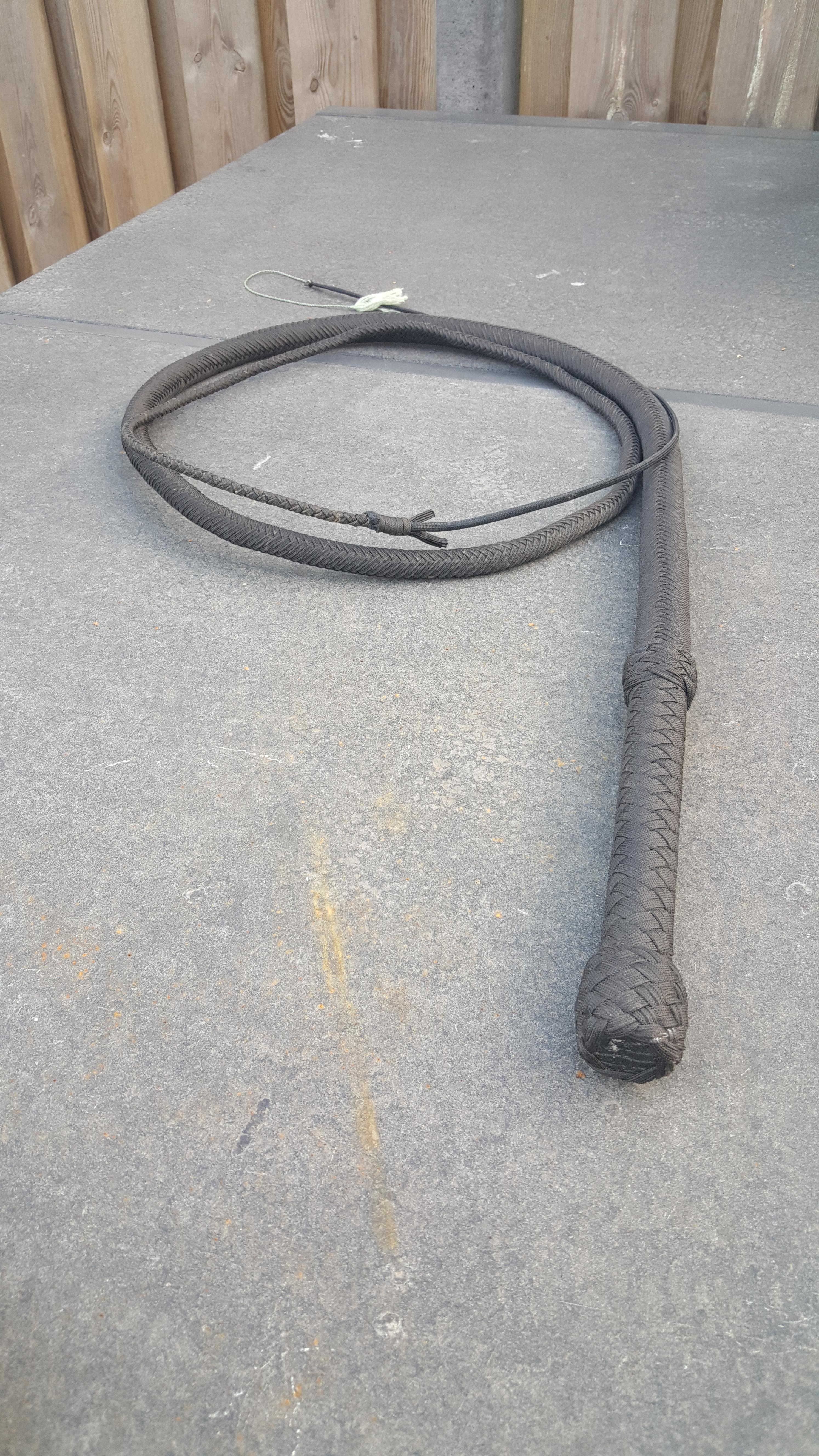 There's some mileage on it, but it only adds to the charm and to the feeling I think. 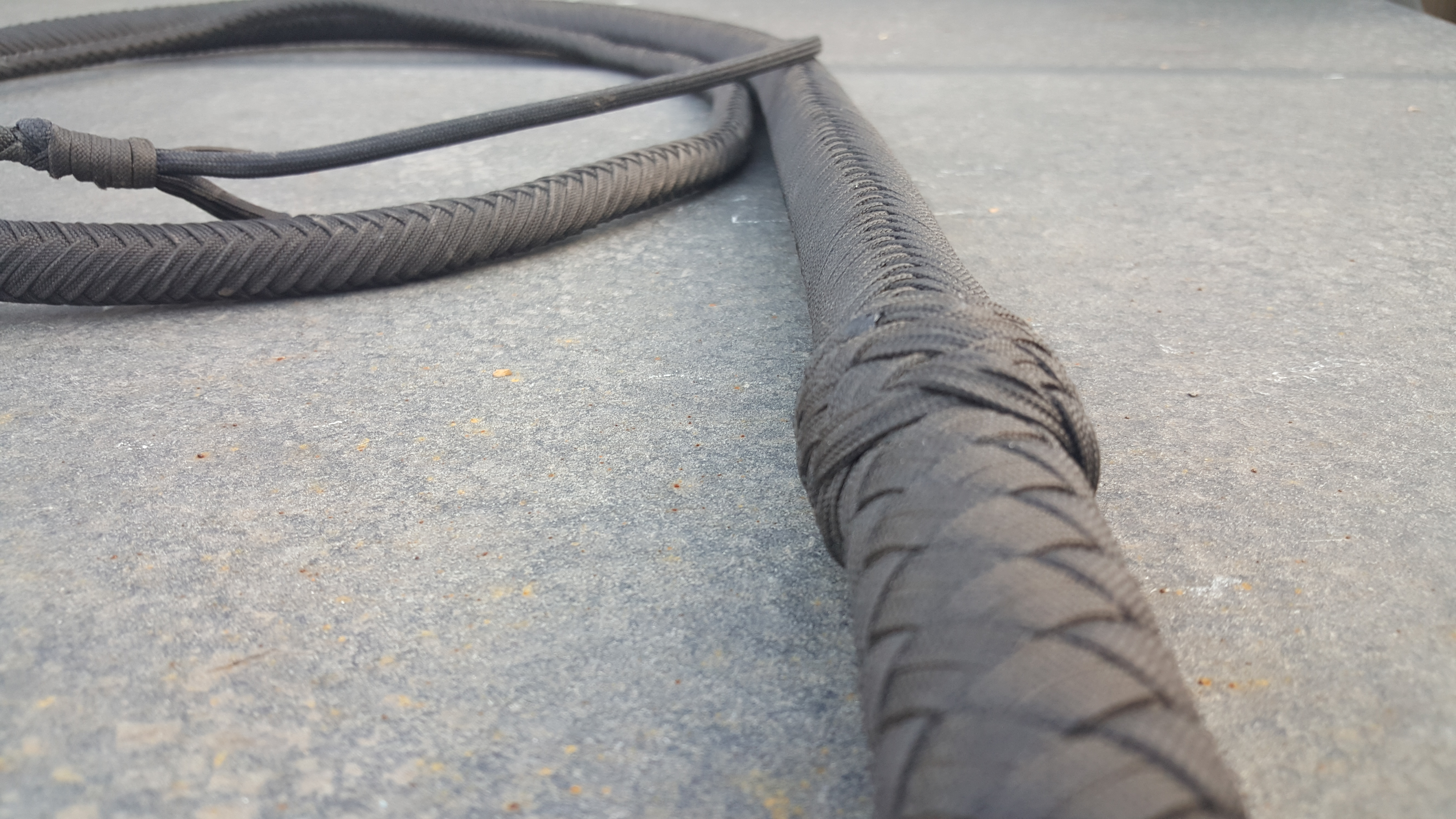 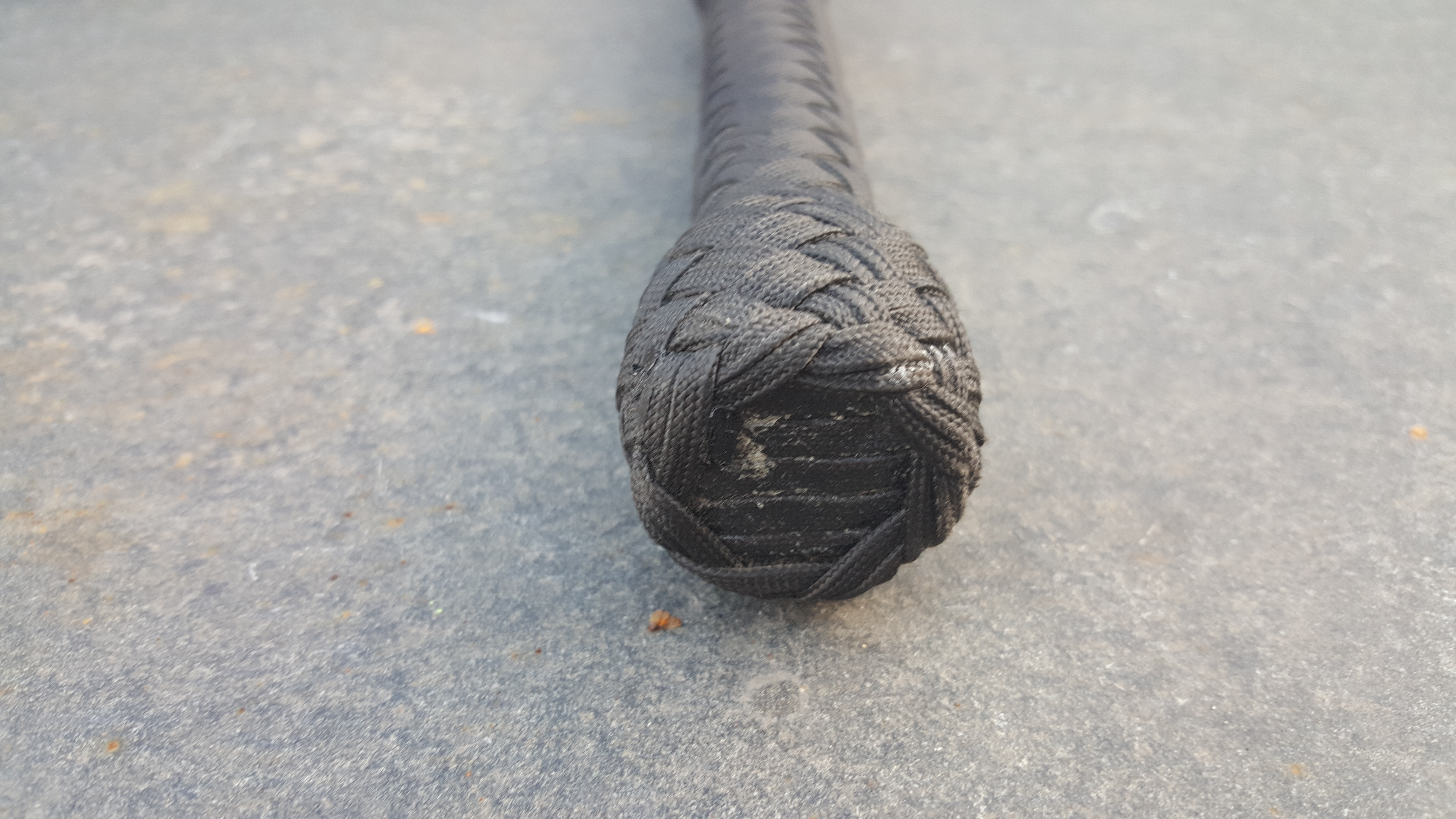 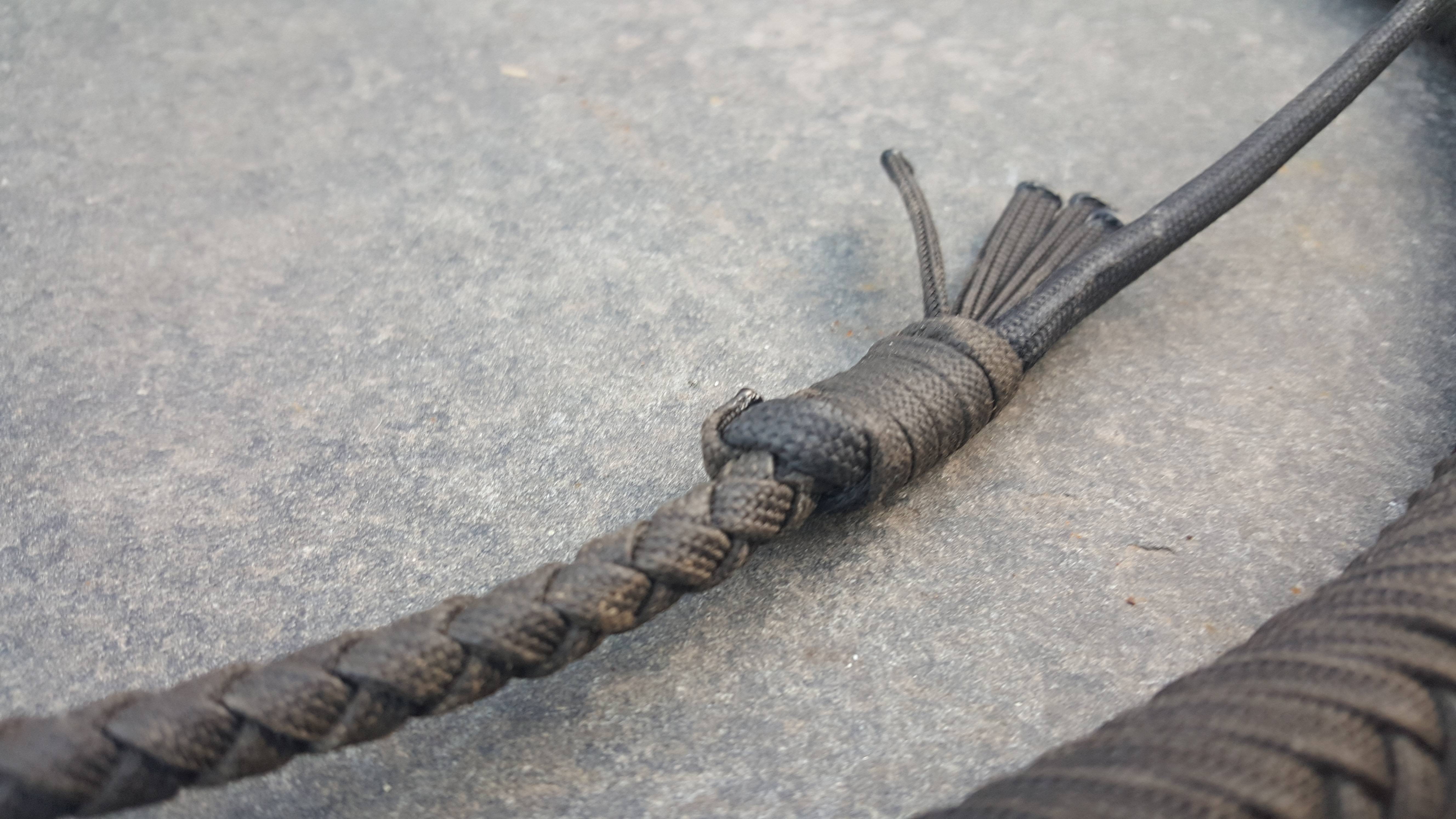 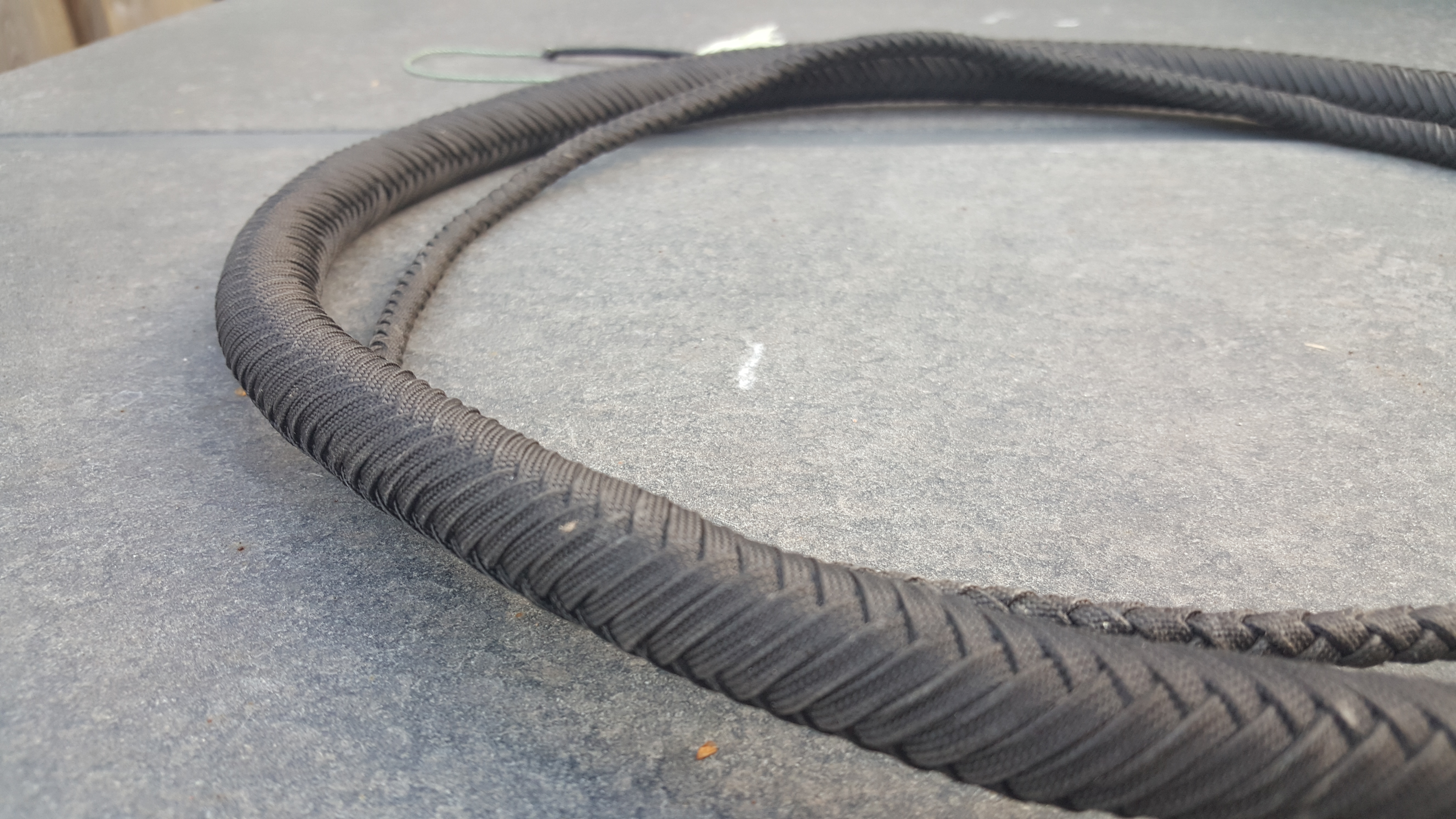 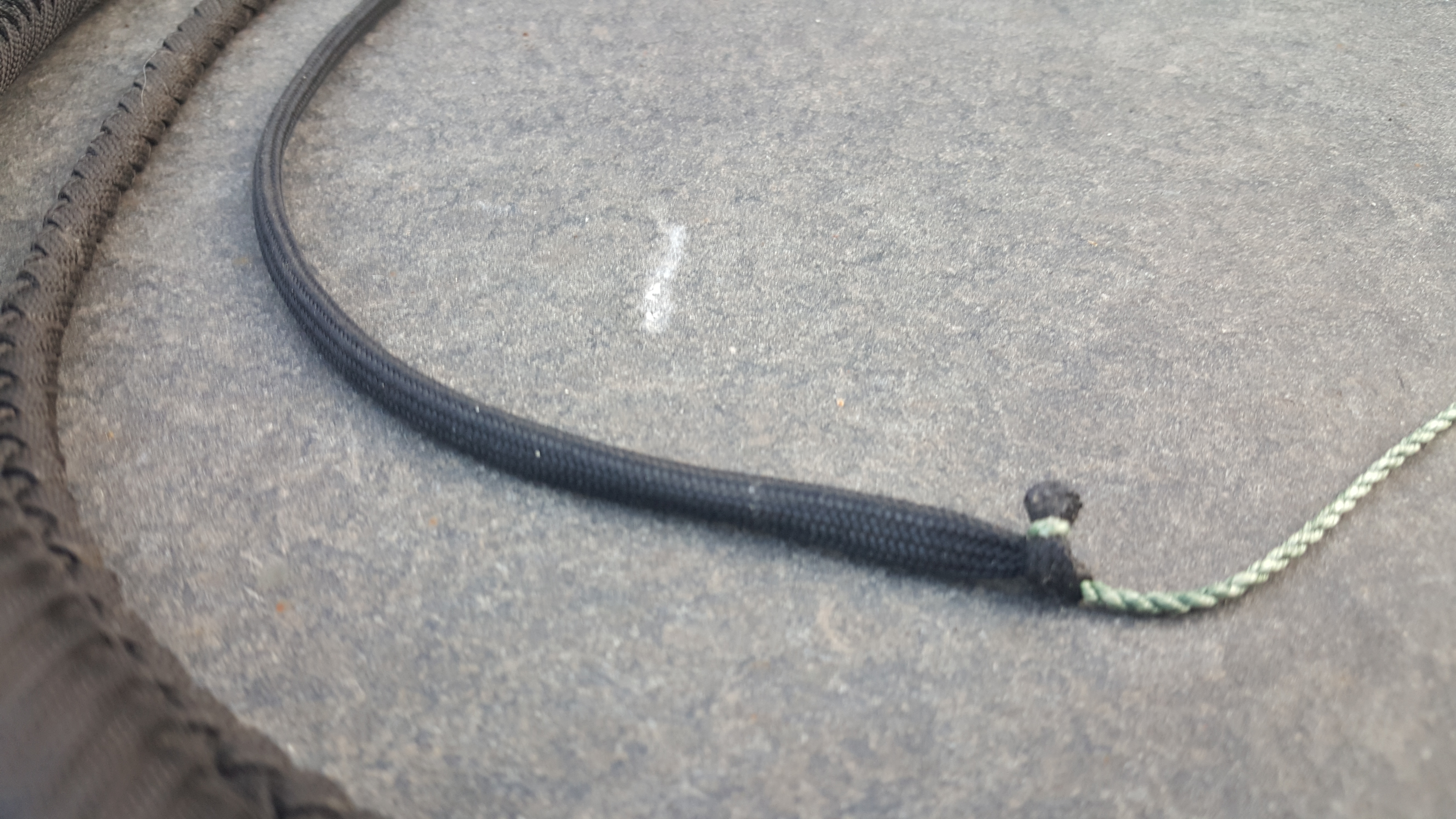 It handles really well, It needs some getting used to, I have to get accustomed to the whip and the whip to me.

And it's weight.... oh it is heavy, my wrist gets strained after a cracking session, but that's good. It's such a slow whip, you can crack it with a lot of fluid motion, it almost seems like a dance.
I tried to crack it fast, just to see what it would feel like, but that's impossible. It's made with elegance in mind and I like that.
And it's loud.

Then there's the craftmanship, well, it's made by mr. Shimaoka, what more is there to say.

Roy, I'm honoured to have received this beautiful whip. Thank you.

Sven, I know how much you're going to enjoy this whip. I've got one just like it!

That looks pretty awesome, Sven. Keanu did a great job. I have some heavy whips and they make my wrists ache as well, but man are they fun to play with.

Hey! Let's be careful out there."

Happy it made it to you Sven. It is definitely built like a tank. Enjoy

He died for me, I'll live for him

Thanks everyone. I will.

I just had contact with Georg whose wife received Nadine‘s donation whip.
But what is really important: He is still seriously suffering from the accident he had and back in hospital. It seems he‘s lucky to be still alive and on his way to full recovery, but the injuries were severe and he was not in shape to log in here.
He told me he will definitely be back , but is still weak at the moment.

I refuse to join any club that would have me as a member.

Okay. Good to know. Thank you for the info. I was about to delete his account. Short after the accident he posted two times and then nothing. I mailed him, but never received an answer. At least he‘s on the mend. That‘s the good news.

Ugh, that's too bad about Georg.  I didn't realize that his crash was that serious.  Thanks for the update, Wolfgang.

I was wondering, Fleming, how you are getting on with the whip you got from me.  I was hoping Gitte would have an easier time with it since I made it especially with a woman in mind.  Let me know?

Jessie's post (57) prompts me to ask Ben: have you tried waxing the whip I sent you? Did that make any difference?

Robert, I've tryed out the whip that you've send me, but I didn't wax it yet. I'm planning on waxing it together with the wave lace whip which I'm currently working on. If waxing it won't make any signifficant difference, I'll remove the thong and make a new one.

The handle looks superb and it feels very, very comfortable to hold that handle during whipcracking!
Thank you very much for that wonderful prize!

Thanks, Ben! I'll be fascinated to hear how this develops....