Hey, next time you do a Meet & Greet, you should really try to have a little fun...

Scott, I disagree.  They should keep it serious like this one.

Yeah, they should lighten up a little.

Can you imagine all the rabbits if they were actually having lots of fun, though, and not being serious???  Really!
https://www.youtube.com/watch?v=mAYrZ10 … pp=desktop

Really.  Still no explanations about the dead rabbits.  Hmmmmmm

I'd like to know where that came from as well.
Maybe it's an obscure German expression?

Okay, knowing what I know about Robby, it was something he said just because it popped in his head.  That's it.  You were all in on the joke when he said it.  I am willing to bet that even Robert and Roger will say, "I have no idea what that was about."  Robby's brain = random rabbit Armageddon.  This is why we love him so much. 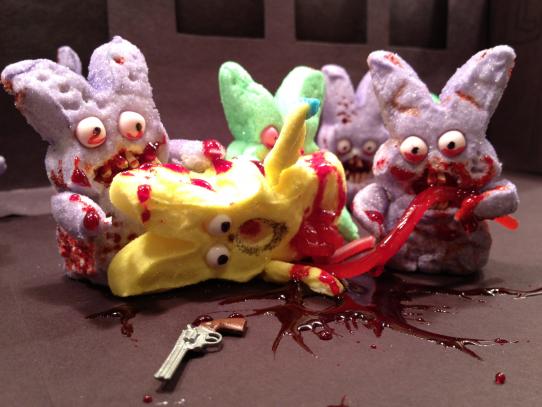 Absolutely. Robert and I didn't even know that Robby had started recording. We were still mentally preparing when he sat down and said, "Let's do it!"

The whole Dead Rabbit thing came out of the blue but Jessie, I love that pic!

Roger's quite right. Robby said afterwards that he had no idea where the dead rabbit came from. He just suddenly said it! (One never knows quite what he's going to say next - and I don't think he does, either!) We certainly had a great time....

Jessie - if you post that kind of pictures often I am unable to visit WB while I'm at work. Everyone looks at me and asks why I'am laughing

OK, that picture is hilarious!

Jessie, thank you for sharing that picture and for giving us an insight on Robby's thoughts

I think its hilarious.   Same problem here, I'm on break at school and see that picture.  Then everyone wants to know what I'm laughing about....?  And they would not get the reference.

Robby's brain = random rabbit Armageddon.  This is why we love him so much.

Congratulations to the winners! I'm pretty late to this one, but I'm sure you all had a fanta... rather, a stern and serious time

Hm. I think, Jessie's right. Sometimes I surprise myself. And let me assure you - it's not always for the best. How should I know what I think before I hear what I say? I have to admit that the dead rabbit thing just popped into my head. And before I could do anything, it was out. I had something similar like that. But unfortunately on a stage in front of 700 people... A few of them considered it funny.

And - the fun? What the hell are you talking about? Who had fun? When we did the drawing it was more of a white tie mood. Not too formal, but we all knew that we have a responsibility. And so we did the whole thing straight forward and we did not enjoy anything of this.